Great Northern War and foundation of the Russian Empire 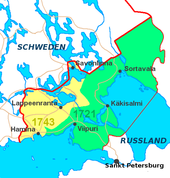 Peace of Nystad: The Swedish loss of territory in Old Finland in green

The Peace of Nystad ended the Great Northern War between Sweden and Russia on September 10th . Sweden cedes the areas of Ingermanland , Livonia , Estonia , the islands of Ösel and Dagö and South Karelia to Russia . In return, Finland gets it back, except for Old Finland , which Peter I conquered in 1714.

On November 2nd, Tsar Peter I was proclaimed Emperor of the Russian Empire in Saint Petersburg . Peter I crowns himself like all his successors and expresses with his self-coronation that the emperors are subject to neither secular nor ecclesiastical power. To emphasize the western orientation of the empire, the traditional Russian cap of the Monomakh is replaced by the tsar's crown . International disputes arise from the fact especially with the Habsburg Empire , whose ruler the Emperor of the Holy Roman Empire is to be the successor of the Western Roman Empire feels and therefore claims the only legitimate leadership in the Christian world. For this reason, the imperial title is only recognized by the defeated opponents of the war, Sweden and the Netherlands , with which Peter the Great has good connections.

The county of Nassau-Idstein falls to Friedrich Ludwig von Nassau-Ottweiler .

The Danish Lustration , a land survey in Western Pomerania , which was temporarily (1715 to 1721) under Danish rule , is completed. 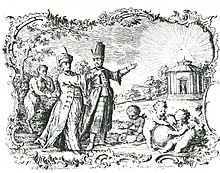 Title vignette of the first edition of the Persian letters

Johann Sebastian Bach finishes the work on his Brandenburg Concerts , which he dedicates to Prince Christian Ludwig of Brandenburg-Schwedt .

Statue of Hans Egede in the Greenlandic capital Nuuk

Founding of dioceses and monasteries

The plague wall near Fontaine-de-Vaucluse

A New Map of Europe According to the Newest Observations , Herman Moll