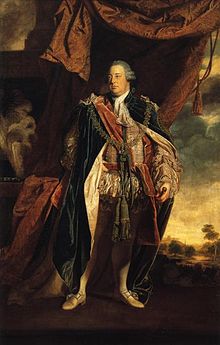 Youth and first assignment in the War of the Austrian Succession 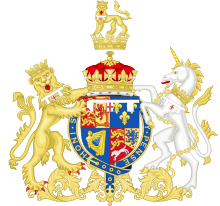 Coat of arms of Prince Wilhelm August, Duke of Cumberland 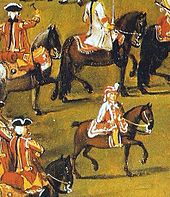 The 14-year-old Wilhelm August in fantasy hussar uniform in front of troops from the Electorate of Hanover (detail of the painting of the Revue von Bemerode 1735 by Johann Franz Lüders , 1738)

Prince Wilhelm August was born in London as the third son of George II of Great Britain and his wife Princess Caroline of Brandenburg-Ansbach . His parents moved there after his grandfather, George I , became King of Great Britain .

Already at a young age he was made Knight Companion of the newly founded Order of the Bath in 1725 , in 1726 in the Peerage of Great Britain as Duke of Cumberland , Marquess of Berkhampstead , Earl of Kennington , Viscount Trematon and Baron Alderney , and in 1730 as Knight Companion accepted into the Order of the Garter.

Cumberland entered the military at an early age and in 1743 accompanied his father as a major general to the Pragmatic Army during the War of the Austrian Succession in Germany. He took part in the Battle of Dettingen on June 27, 1743 and was wounded in the knee. In 1745 he was given the command of the Allied army in the Netherlands and lost the battle of Fontenoy against Moritz Graf von Sachsen with the Dutch General Waldeck on May 12, 1745 .

In 1746 he was entrusted with the supreme command of the troops that were sent against the Catholic pretender to the throne Charles Edward Stuart ("Bonnie Prince Charlie") . He was so threatened the position of the Jacobites that they decided to retreat to Scotland to rebuild the troops there. On April 16, 1746, the Duke of Cumberland was able to defeat these exhausted forces, which had shrunk to around 5,000 men, in the Battle of Culloden . In this last battle on British soil he commanded over 9,000 men, including the well-trained troops of the previous campaign in Flanders as a core. The government armed forces  , which were superior in all respects - including members of the Scottish clan loyal to the government - needed the not uncommonly short duration of 25-45 minutes in the open battle to wipe out the clan army, and they knew no mercy. On Cumberland's orders, the injured soldiers of the Highland Army - including incorporated soldiers of non-Scottish origin - were systematically stabbed to death with a bayonet . Women and children who watched the fight, as was customary for the time, were killed or injured. Prisoners were executed or imprisoned and - in places actively supported by Cumberland - many were deported overseas. The victorious soldiers penetrated - also in connection with the search for the fleeing Stuart Prince - plundering, raping and pillaging deep into the Highlands . In England, Cumberland was hailed as a great savior after his victory at Culloden. Today's British Army, on the other hand, no longer classifies the Battle of the Culloden Moor as one of the most glorious because of the brutality with which Cumberland allowed his troops to act and sees it more as a blot than a point of light in its history. In Scotland, Cumberland was henceforth called the " butcher of Culloden ". There was no further Jacobite uprising after the battle.

Appointed captain general of all British troops by the king, honored by parliament with an annual allowance of £ 25,000 sterling, he took over the supreme command again in the Netherlands, but was there on July 2, 1747 with an outnumbered army in the battle of Lauffeldt Not far from Maastricht defeated again by the French under Marshal Moritz von Sachsen . In England, after the Peace of Aachen in 1748, he became Chancellor of the University of Dublin .

As part of the Seven Years' War , which was fought around the world , Cumberland, as Great Britain's most famous military leader, was given command of the army in northwestern Germany after the reversal of the alliances between the great European powers , where he and the armed forces of the Electorate of Hanover and several allies took over the German ancestral lands of the royal family against the invading royal family French under Marshal d'Estrée should protect. There he was defeated with a again outnumbered army on July 25, 1757 after an initially skilful campaign by the French not far from Hameln in the battle of Hastenbeck . As a consequence of this defeat, he concluded, with Danish mediation, the Convention of Zeven Monastery , as a result of which his 40,000-strong army withdrew across the Elbe and left the Electorate of Hanover in the hands of the French.

This truce, perceived as shameful in London with its unfavorable conditions, led to a break with his father and was revoked in the same year by the British, who subsequently increased their military efforts in the north-west German theater of war. Cumberland, who had meanwhile returned to England, had resigned his military offices and, after leaving the army, now devoted himself to politics and horse breeding. From July 1765 until his death he was a minister with no portfolio in Rockingham's first cabinet . He died on October 31, 1765 at the age of 44, unmarried and childless in London . In the absence of descendants, his hereditary nobility titles became extinct.

Influence on racing and horse breeding

William Augustus was instrumental in ensuring that horse racing became very popular again in Great Britain after 1750. Horse racing had always been a royal pleasure. The last monarch with great enthusiasm for horse racing was the English Queen Anne, who died in 1714 . Her successor, George I , however, had shown little understanding for his predecessor's passion for racing. In Newmarket , a town 105 kilometers north of London, where horse races have been held since 1174 and the center of English horse racing into the 21st century, George I even had the royal palace rented out. An Act of Parliament in 1740 even stipulated that races were only allowed if the prize money was at least 50 pounds sterling. This very large sum was intended to limit and reduce the high number of horse races that had been common in Great Britain until then. The racing enthusiast William Augustus, on the other hand, celebrated his victory immediately after the victory in the Battle of Culloden with horse races, which were held with captured horses of the Jacobites. In 1750 he not only founded a stud farm near Windsor , but also became a member of the newly founded Jockey Club . One of the outstanding racehorses owned by William Augustus was the stallion Marske , with whom William Augustus first won in Newmarket in 1754.

William Augustus was also to gain importance as the breeder of the two stallions Eclipse and Herod , who after the prince's death both became important heirs of the English thoroughbred horse breed . Eclipse was descended from Darley Arabian through the stallions Marske , Squirt and Bleeding Childers . The Arab stallion was probably born in Syria in 1700 and exported to England in 1704 by the English merchant Thomas Darley , where he was used as a sire of the Darley family at the Aldby Park estate , Buttercrambe . His offspring stood out for their great racing performance, so that they played a dominant role in the breeding of the English thoroughbred. According to several studies, 95% of all English thoroughbreds can be traced back to this stallion in the paternal line. The exceptional horse Eclipse plays a major role in this. Byerley Turk has the horse Herod as an ancestor, next to Darley Arabian and Godolphin Barb, the third of the three founding fathers of the English thoroughbred. In the direct paternal line, the stallions descending from Darley Arabian ousted the other two founding fathers in the second half of the 20th century. However, Herod and his descendants are one of the dominant racehorses of the 19th century.

In 1751, Georg Friedrich Händel added the phrase “See, the Conqu'ring hero comes”, dedicated to Cumberland to his oratorio “ Joshua ”, which is still part of the patriotic songs of Great Britain and in the German-speaking world as the Advent song “ Daughter Zion, rejoice ”is known.

Prince William County in the state of Virginia is named after him.