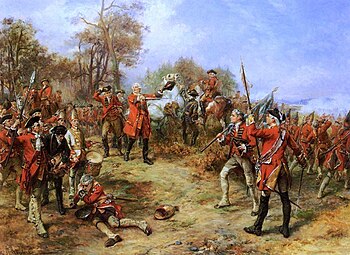 The Pragmatic Army consisted of Habsburg-Austrian , British , Dutch , Electoral Hanover and Hesse-Kassel associations. From 1741 to 1745 she fought on the Habsburg side against the Prussians and the French during the War of the Austrian Succession in Germany .

The name Pragmatic Army is derived from the Pragmatic Sanction of Emperor Charles VI. with which the female succession in the House of Austria (Habsburg) was made possible. The pragmatic sanction was used by the opponents of Austria, Bavaria (from 1743 Imperial Army ), Prussia , France and others. a. after Charles VI. Death in 1740 questioned what sparked the War of the Austrian Succession.

The British King and Elector of Hanover Georg II , who was allied with the Hungarian Queen and Austrian Archduchess Maria Theresa , the daughter of Charles VI., Raised an army on the Lower Rhine that operated against the Prussians and the French. The name “Pragmatic Army” was intended to give the British expedition in the German Empire a legitimate look by appealing to the defense of the pragmatic sanction issued by the late emperor. From the English point of view, the German theater of war was actually just one of many in the British-French clashes of the time that were being fought on the oceans and in the overseas colonies at the same time. The naming was thus propaganda that accompanied the war.

After the provisional securing of Kurhannover, the Pragmatic Army marched against the French in southern Germany. On June 27, 1743, the enemy was met in the battle of Dettingen . George II personally led his army and was victorious. It was the last time an English king personally led his army in battle . The king had his victory glorified by George Frideric Handel in the Dettinger Te Deum .

In 1745 the Pragmatic Army was defeated by the French at the Battle of Fontenoy ; soon after it was dissolved.