from Wikipedia, the free encyclopedia
Battle of Dettingen
Part of: War of the Austrian Succession 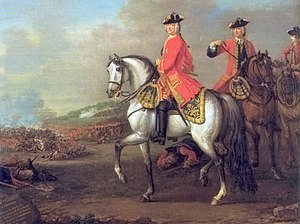 King George II during the Battle of Dettingen; Painting by John Wootton

The Battle of Dettingen on June 27, 1743 between Great Britain , Kurhannover and the Habsburg House of Austria on the one hand and the French on the other hand took place during the War of the Austrian Succession in what is now Karlstein near Aschaffenburg ( Bavaria ) and ended with a victory for the allies.

Since the French under the Duke of Noailles, numbering around 70,000 men , had interrupted the supply lines of the pragmatic army near Frankfurt am Main , the army began to retreat towards Hanau on June 27 to meet expected Austrian reinforcements. When the allies approached the village of Dettingen (today a district of Karlstein am Main ), they found that the place was occupied by French troops who had crossed the Main on ship bridges. The march road was blocked. The French artillery was on the other side of the Main and could fire into the flank of the allies in an attack. At the same time, part of the French army marched under Noailles on the other side of the Main in the direction of Aschaffenburg, in order to cross the river there and stab the allies in the back.

The allies formed their troops into a battle line with the left wing on the Main, which lasted from around 9 a.m. to around noon. The battle was opened by the French artillery, which fired at the British cavalry from the other bank of the Main. The Duke of Gramont , commander of the French troops in Dettingen, went on the attack, assuming that he was only facing the enemy rearguard. With this he positioned his soldiers between the artillery and the allies. After an initially unsuccessful battle, the allies threw a French infantry attack back on their lines, whereupon the French withdrew over the ship bridges to the other side of the river. Apparently this was done in quite a disorder; one of the ship bridges collapsed, so that a large number of soldiers drowned in the Main. The victors are estimated to lose 3,000 and the French 4,000 men. King George II did not participate in most of the battle because his horse ran away and he did not come back in time. Participants on the British side also included James Wolfe and Jeffrey Amherst , who played an important role in the conquest of Canada in the French and Indian War ( Seven Years War ) (1754–1763) .

Medal Georg II, on the occasion of the battle of Dettingen (in the coin cabinet of the Lower State Museum Hanover)

After their defeat, the French withdrew across the Rhine, the pragmatic army continued their retreat to Hanau. The fact that the battle is one of the more well-known of the War of the Austrian Succession is less due to the military than to the fact that it was the last in British history at which the monarch was personally present, and Georg Friedrich Handel used the victory as an opportunity, his Dettinger Te Deum to compose, which premiered on November 27th of the same year in the presence of the king and the entire court.