from Wikipedia, the free encyclopedia
Battle of Pfaffenhofen
Part of: War of the Austrian Succession

The Battle of Pfaffenhofen on April 15, 1745 took place during the War of the Austrian Succession between French - Electoral Palatinate and Austrian troops near the town of Pfaffenhofen an der Ilm in Upper Bavaria and ended with an Austrian victory.

In 1744 the allied French and Bavarians, in cooperation with Prussia, succeeded in driving the Austrians out of Bavaria and reinstating the emperor and Bavarian elector Charles VII. In Munich , where he died in January 1745. His son and successor Maximilian III. Joseph wavered between a peace party, to which, in addition to the most important officials, the former commander-in-chief Friedrich Heinrich von Seckendorff and the emperor's widow belonged, and a war party under Ignaz von Törring and the French ambassador Chavigny.

When the first negotiations therefore failed, the Austrian army launched an offensive at the behest of Queen Maria Theresa in the spring of this year to put the Bavarian regent under pressure. After the Austrian troops took Amberg and Vilshofen , the Bavarian army under Törring and the allied units of the French, Hesse and Palatinate were increasingly on the defensive.

In order to unite the scattered troops, Törring had taken the Bavarian and Hessian soldiers back behind the Lech line. The French general Henri François de Ségur had not been informed of these steps and was waiting west of Pfaffenhofen, now without the necessary security, for the Palatinate under General Zastrow, who finally arrived on April 14th. The next day they wanted to retreat behind the Lech together as well.

When the Austrian general Count Karl Josef Batthyány learned of the unfortunate situation of the French and Palatinate, he sent General Mercy-Argenteau on the morning of April 15 with infantry, cavalry and artillery units against Pfaffenhofen. Dragoons were the first to reach the outer city limits and wade through the Ilm.

While trying to storm the city, the riders were shot at from the suburbs and from the city fortifications. When they finally succeeded in smashing the city ​​gates , there was a house-to-house battle that was waged over the entire length of the main square in Pfaffenhofen and especially around the churchyard.

When the infantry from Mercy-Argenteau arrived, they chased the French out of the city along the Gerolsbach up to the heights of Niederscheyern . There the French took up their position again. The town of Pfaffenhofen was meanwhile occupied and plundered by Austrian border guards from Warasdin. 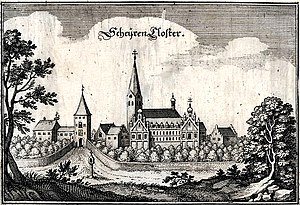 Segur had meanwhile moved into the hills west of the city. However, when the hussars broke out of the Sulzbacher Forest, which reached the north-western flank of the French, he had to retreat again to a hill even further west.

The French initially held this position with the support of their artillery . However, when they themselves came under artillery fire and the main power of Batthyanys gradually appeared on the battlefield , Segur was forced to retreat to Mitterscheyern again. It was only at this point in time that the people of the Palatinate were persuaded to face the enemy as well. When the light cavalry under General Trips continued to attack the flanks and the back and the Austrian armed forces continued to grow, Segur feared being trapped. He gave up the original goal of Aichach and instead ordered a sharp turn to the north.

The neighboring Scheyern monastery escaped plundering by the Pandours after the battle only because a wounded Austrian cavalry master had taken quarters in it.

The news of the withdrawal panicked the people of the Palatinate. Their flight also shook the ranks of the French, who could only be held with great effort. When crossing the mud on the Gerolsbach 9 guns were left behind. The hussars did not cease to attack the flanks of the retreating and cause high casualties. Only when the united French and Palatinate crossed the couple at Hohenwart at 6 p.m. did the Austrians initially stay on the eastern bank.

After a forced march, the defeated troops reached Rain at 11:00 a.m. the following morning , where they set up camp , which, however, had to flee the next day before the Austrians who followed. The entire magazine fell into the hands of the Austrians. Only the burning down of a Lech bridge could avert a military catastrophe for the allies.

Segur had thus led his troops out of direct threat with high human and material losses, despite a broken discipline, but without the loss of flags or army symbols .

As Maximilian III. Joseph in Augsburg had examined the deplorable condition of his army himself and had also received the news of the defeat at Pfaffenhofen, the peace party finally prevailed, while Törring fell out of favor. So the peace of Füssen (April 22 / May 2, 1745) with Austria quickly came about , in which he recognized the pragmatic sanction , promised to cast his electoral vote for the election of Franz Stephan of Lorraine as emperor and in return his country in the borders of 1741.

The Battle of Pfaffenhofen ended the war in southern Germany in favor of Austria and broke Bavaria out of the coalition of its opponents. The main theater of the war was now the Austrian Netherlands, today's Belgium , where the Austrians fought against the French in alliance with Holland and Great Britain , and Silesia , where the Second Silesian War was fought against Frederick II of Prussia .

Pages on the units involved: