from Wikipedia, the free encyclopedia
War of the Austrian Succession (1740–1748)

The King George's War (1744-1748) was a colonial war between England and France in North America around the respective spheres of influence, especially on the Atlantic coast the French Acadia in what is now Canada and British New England , as well as the valley of the Ohio River inland. It is considered a sideline of the Austrian War of Succession (1740–1748), which was taking place in Europe at the same time, and belongs to the series of French and Indian Wars , because Indians were used as allies of the European powers on both sides . It is named after King George II of England.

Since the end of the War of the Spanish Succession in 1713, there has been formal peace between France and England. The conflicts in the colonies of North America persisted. The War of Jenkins' Ear between England and Spain from 1739 to 1742 in the colonies of the Caribbean and in southern North America ended in the War of the Austrian Succession, which in turn included France as a party in the armed conflict. After the mutual declarations of war, France and England began open conflicts in the North American colonies. Mostly loyal colonists fought on both sides. Few European troops intervened in the conflict in North America. 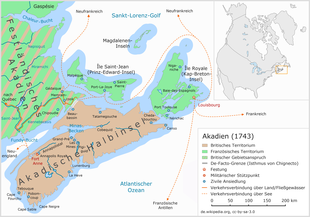 Initially, France tried from the fortress Louisbourg on Cape Breton Island to conquer the British settlement of Annapolis Royal , which was then Port Royal . The attempt failed and around 4,000 men from New England under the direction of William Shirley , the governor of Massachusetts, counterattacked and with the support of twelve British warships occupied Louisbourg. In 1746, with the planned support of a fleet and fresh troops from the motherland, they wanted to conquer the center of the French colony of Québec with the cities of Montreal and Québec City in a coordinated attack . Reinforcements from England did not materialize, however, so that this attack did not take place and the troops of the New English colonialists that had already been drafted disbanded in 1747. Also in 1746, a French fleet of 76 ships failed in an attempt to regain Louisbourg. The causes are losses from storms and epidemics on board already on the journey and the unexpected death of the captain of the fleet, Jean-Baptiste-Louis-Frédéric de La Rochefoucauld de Roye, duc d'Anville. Without fighting, around 3,000 people died on the French ships, the greatest loss of all activities in King George's War. The British fleet was able to repel a second French attempt in 1747 in a battle on the high seas.

In the meantime, there has been a series of raids on the settlements of the opposite side in the border regions on land, in which both colonialists and their Indian allies were involved. On the French side, the Mi'kmaq and Abenaki were predominantly active. Both sides proceeded with extreme brutality, but were unable to achieve any lasting success, except that the border region was largely depopulated and was subsequently repopulated only very slowly. In the valley of the Hudson River in particular , the French colonists advanced as far as Saratoga Springs and Albany . French and Spanish privateers operated off the coast, and they also launched attacks on coastal cities as far south as Beaufort in North Carolina .

The war ended with the Second Aachen Peace of 1748, in which both parties withdrew to the previous lines, exchanged prisoners of war and returned all conquests in the meantime, including Louisbourg. An agreement on the mutual territorial claims was expressly not reached. In the wake of the conflict, Austria shifted its loyalty from Great Britain to France when Great Britain allied itself with Prussia and the conflict continued. That would lead to the Seven Years War in Europe and the fourth and final French and Indian War in North America.