from Wikipedia, the free encyclopedia
Battle of Hennersdorf
Part of: Second Silesian War
War of the Austrian Succession (1740–1748) 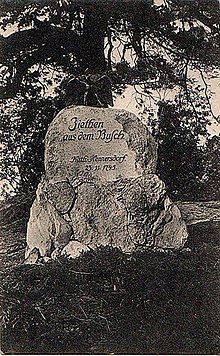 On November 21, 1745 Austrian troops marched into Saxony under Prince Karl and united with troops from the Electorate of Saxony. On November 23, King Friedrich II was informed of the march. The Prussian cavalry thereupon surprised Electoral Saxon regiments encamped near Katholisch-Hennersdorf. The Hussar Regiment Ruesch (1806: H 5), the Hussar Regiment von Zieten (1806: H 2) and the Cuirassier Regiments Rochow and Bornstedt were involved . On the Saxon side stood the Saxon cuirassier regiments Vitzthum , O'Byrn and Dallwitz as well as the infantry regiment Sachsen-Gotha , which were completely wiped out. Prince Karl then did not dare to oppose the numerically superior Prussian army and withdrew to the Bohemian area. The Prussians fell into the hands of the full magazines of the Saxon army near Görlitz . After the surprise attack near Hennersdorf the name "Zieten aus dem Busch" came into circulation for the Prussian commander.