from Wikipedia, the free encyclopedia
Naval battle at Toulon
Part of: War of the Austrian Succession

The sea ​​battle at Toulon (sometimes also sea ​​battle at Cap Sicié ) on February 22, 1744 took place as part of the Austrian War of Succession . The allied fleets of France and Spain faced each other on the one hand and the British Mediterranean fleet on the other. Great Britain and France were not yet officially at war with each other, but supported their respective allies. The allied Spanish and French left the port of Toulon . They met the British fleet and there was a battle in which only a part of the ships was involved. Afterwards, both sides did not credibly claim victory for themselves. In Britain in particular, commanders have been accused of failure. There was a spectacular court martial in which, among other things, Admiral Thomas Mathews was found guilty and lost his post.

Louis XV agreed with Spain in October 1743 to take part in the war against Great Britain and the Kingdom of Sardinia in the Mediterranean. In return, France expressly supported the Spanish hereditary claims to the Habsburg possessions in Italy. Even Gibraltar and Mahon should fall a victory to Spain. The open declaration of war was still not made. In the second half of 1743, the Spanish under Admiral Juan José Navarro tried to land in Genoa . The English fleet prevented this advance and forced the Spanish fleet to retreat to Toulon. Because of the overwhelming power of the British at sea, the fleet had to spend the next few months there.

The English admiral Thomas Mathews saw it as his main task to prevent the Spaniards from leaving Toulon. He put pressure on the French authorities. He also exerted pressure against the Spain-friendly Genoa and hindered trade. Both Genoa and France initially allowed this to happen because they lacked the means of power. Mathews even asked Genoa to transfer the port of Finale.

The Spanish government turned to Louis XV. and asked for help. The king ordered Admiral Claude-Elisee de Court la Bruyere , who was then almost 80 years old, to escort the Spanish either to Genoa or back to Spain with the French Mediterranean fleet . Only if the French fleet was to be attacked was it allowed to defend itself. The Spanish fleet could not fully participate in the departure because the necessary crew for four frigates was missing. The entire joint fleet consisted of 27 warships. Among them were 8 frigates. The fleet had 1970 guns.

Mathews had learned of the impending outbreak. He pulled together the majority of the English ships at the Îles d'Hyères . He had 30 ships of the line , 13 frigates and 5 fires . Another two ships watched the port of Toulon. The English fleet had 2,434 guns.

Overview of the battle

The British vanguard and most of the French ships moved southward. The British rearguard was too far away to take part in the battle at this point. The ships under Mathews and the Spanish ships met at around noon at Cape Sicié. The British flagship, the Namur , with 90 guns left the battle line with two other ships to attack the enemy flagship, the Real Felipe with 110 guns and its escort ships. Sometimes the artillery battle turned into hand-to-hand combat.

The Spaniards vigorously defended themselves. The British flagship was unable to maneuver and had to leave the battle. The Spanish flagship lost all masts, but continued to fight. At around 5 a.m., the British attacked the Spanish flagship again, this time with fire. This attack failed and Spanish ships drove the British escort ships away. The two opposing squadrons rallied. 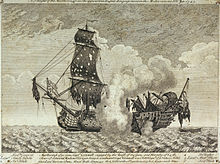 The badly damaged HMS Marlborough after the battle

Meanwhile, there had been little fighting between the ships of the British advance guard and the French ships.

The Spanish-French vanguard remained without opponents. Their attempt to turn around and attack the British from the other side failed due to countermeasures by three British commanders who deliberately disregarded orders to the contrary. They were later released for this behavior. As a result, the sentence was lifted again. Captain Edward Hawke left the line, successfully attacked an enemy ship and took it as a prize.

The onset of darkness ultimately ensured that Mathews and his squadron could no longer attack and clearly defeat the Spanish ships. The Spaniards lost a ship completely. Three were badly damaged and the flagship was largely incapacitated. The British flagship and another ship were so badly damaged that they had to be towed. Other British ships had also suffered considerable damage in some cases. During the night there was a violent wind that drove both fleets out to sea. The next day there were a few smaller skirmishes.

The Spanish and French fleets managed to rally by evening. They formed up for a renewal of the battle. The British also got ready for battle. The night again prevented a meeting of the two fleets. During the night, the strong wind ensured that the two fleets were far apart the next morning. The next day, Vice Admiral Lestock was supposed to pursue the enemy, while Mathews himself sailed towards Menorca . Once there, he ordered Lestock to lower the flag and return to England. The French fleet entered Alicante on February 27th . The Spanish fleet reached Cartagena on March 7th. It later reunited with the French.

Both sides claimed victory for themselves. The allied French and Spanish had managed to leave Toulon and reach Spain. But they did not succeed in gaining naval supremacy in the Mediterranean. Due to the damage caused in the battle, the fleet was forced to remain in port for the next time. Philip V made Navarro Marquis de la Victoria and appointed him lieutenant general of the fleet. At the government level, Spain accused France of playing the wrong game. The French had largely stayed out of the battle. The French admiral was summoned to Versailles for an investigation and fell out of favor. The English fleet suffered only a short time from the consequences of the battle and was also further strengthened.

Mathews returned to the UK. The less glorious outcome of the battle was debated in public and in the House of Commons . Lestock, Mathews and eleven captains ultimately had to try court-martial. They were accused of failing to do their duty. One defendant fled abroad, one died before the verdict was pronounced. Only two officers were acquitted. Lestock was one of them. The rest, including Admiral Mathews, were dismissed from the fleet and lost their rank. Mathews had been charged with starting the battle without waiting for Lestock's assistance.