Historical map of the fortress city (1752) 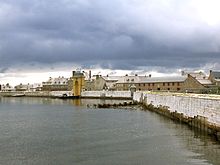 Louisbourg is an 18th century French fortress town on Cape Breton Island in what is now the Canadian province of Nova Scotia , which has now been partially reconstructed .

Foundation and history up to the Seven Years War

Louisbourg came into being after France ceded Newfoundland and other areas of Canada to Great Britain in the Peace of Utrecht after the end of the War of the Spanish Succession in 1713 . The only possessions left on the Atlantic coast of Canada were Cape Breton Island (then Île Royale ) and Prince Edward Island (then Île Saint-Jean ). The French used Cape Breton Island as a base for cod fishing on the nearby Newfoundland Bank (Grand Banks). The 1719 founded, after King Louis XV. named fortress town, to which a protected and ice-free harbor belonged, quickly developed into a flourishing community. Its prosperity was largely based on the fishing and processing of cod, as well as its favorable location, which made the port a transshipment point for the flow of goods between French Canada, metropolitan France and French possessions in the Caribbean . The port also served as a base for the French navy.

Louisbourg, however, was only strongly fortified towards the sea and was vulnerable to attacks from land because a chain of nearby hills towered over the fortifications and thus facilitated bombardment. A first attack on Louisbourg took place in 1745 during the War of the Austrian Succession , after the British learned in New England that the troops there were so poorly supplied that they were on the verge of mutiny. After a siege of 46 days, the fortress surrendered. However, to the great annoyance of the New England colonies, it was returned to France three years later in the Second Peace of Aachen .

Louisbourg and the surrounding area during the siege of 1750

Even before the official start of the Seven Years' War (1756-1763), who in America as the French and Indian War ( was French and Indian ) is called, where it caused between the British and French to hostilities. Louisbourg, along with the forts Duquesne ( Pittsburgh ) and Ticonderoga, played a key role as the backbone of Canada's defense against British attack. In 1756 preparations were made for a British attack on Louisbourg, but this did not materialize due to logistical difficulties, the reluctance of the Army Commander-in-Chief, Lord Loudon , the strength of the defenders and the presence of a French fleet contingent. An attempt by Vice Admiral Francis Holburne in August 1756 to lure the French fleet out of Louisbourg to fight was in vain and led to a setback, as the 20 ships of his fleet squadron were severely damaged and put out of action by a hurricane in September . It was only thanks to the inactivity of the French admiral de la Motte that the ailing ships were able to save themselves in the ports.

A second attempt was made in 1758. The British Prime Minister William Pitt appointed Admiral Edward Boscawen to command a fleet with 39 ships and 14,000 crews sent against Louisbourg. General Jeffrey Amherst , who also commanded General James Wolfe , was in command of the 12,870 men in the landing force . The fortress was defended by 3920 soldiers - 3080 of them regular soldiers, the rest of them Canadian militia - under Governor Droucour , who were supported by 11 warships with 3870 crew members. On June 8, 1758, the first wave of attacks by the British, personally led by Wolfe, landed in strong surf and heavy French defensive fire and was able to secure the coast for the siege army despite considerable losses. The ships of a French fleet squadron in the port were an important source of support for the defenders. On June 28th, however, the French felt compelled to sink the ship of the line Apollon (50 cannons) and the three frigates Fidèle (36 cannons), Biche and Chèvre (16 cannons each) in the port entrance in order to block them. On July 9th, the garrison made a night raid, but it was repulsed. On July 21, the Entreprenant liner (74 cannons) caught fire due to an accident, exploded and also set the two liners Célèbre (64 cannons) and Capricieux (64 cannons) on fire, which were also lost. After the gunfire of the two remaining ships of the line still hampered the besiegers, Boscawen sent 600 sailors to a boat attack in the port on the night of July 25. Despite strong French defenses, they succeeded in capturing the Prudent (74 cannons) and the Bienfaisant (64 cannons) and setting the former on fire, and dragging the latter to the north-eastern port beyond the reach of the fortress artillery. With that the siege was decided. Boscawen was preparing to attack with six ships of the line when the defenders capitulated on July 26. The winners recorded 200 dead and 360 wounded in the fighting for Louisbourg, the French 410 dead, 400 wounded and 5,640 prisoners. As a result, the British had the fortress destroyed.

The conquest of Louisbourg was a preliminary decision for the course of the Seven Years' War in North America. It eliminated an important supply port for French Canada and an important base of the French navy and paved the way for the successful attack on Québec under James Wolfe in the coming year 1759 and thus for the final conquest of Canada by the British.

In 1961, about a quarter of the original fortified town with houses, gardens and streets began to be rebuilt as a National Historic Site managed by Parks Canada . Extensive archaeological investigations and historical studies were carried out. This reconstruction had a major impact on Canadian heritage conservation. The reconstructed part of the fortress houses the Louisbourg Institute , which is engaged in research and presentation of the Louisbourg past. Since 1961, underwater archaeological studies have also been carried out in the waters around Louisbourg, during which eight shipwrecks from the 18th century were discovered, four of which were examined more closely. The remains of the Célèbre in 7 m water depth, the Prudent in 5 m depth and the Capricieux and the Entreprenant in only 4 m depth could be identified. Only the lowest parts of the hull of the ships have survived, most of which are covered by ballast stones. Whole and broken cannons, large numbers of cannon balls and other items of equipment were also found.