The title of this article is ambiguous. Further meanings are listed under Aichach (disambiguation) . 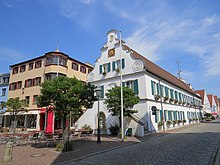 Aichach  [ ˈa͜içax ] is the district town of the Aichach-Friedberg district in the Bavarian administrative district of Swabia .

The city is located in the triangle of Munich - Augsburg - Ingolstadt on the river Paar .

There are 40 officially named parts of the municipality (the type of place and the number of inhabitants (main residence on December 31, 2017) are given in brackets ):

Aichach can look back on almost a thousand years of history. In the second half of the 11th century (before 1078) the church of Aichach was mentioned for the first time in a chronic note from the St. Ulrich and Afra monastery in Augsburg. The settlement is definitely older.

In 1250 a commander was named for the first time as head of a house of the Teutonic Order in Aichach. Aichach was the seat of a German order commander until 1384, who later moved to Blumenthal and existed until 1806. In 1347 Emperor Ludwig awarded the Bavarian "our place Aychach [...] allw the right [...] our place due to the citizens of Munichen [...] have".

Upper gate with extensive inscription on the city's history

In 1634 Aichach burned down almost completely after a siege. In the course of the Thirty Years' War , the troops of the warring parties moved repeatedly through the badly battered city on the road from Augsburg to Regensburg. The Swedish general Gustaf Horn wrestled with the imperial generals Aldringen and Jan van Werth . In 1704, English, Dutch and Spanish troops came to Aichach in the War of the Spanish Succession . The ducal castle was destroyed.

In 1796 French and Austrian troops marched through the city and, to the chagrin of the citizens, took up quarters in and near Aichach. The city suffered greatly from the repeated movements of the armies. Between 1796 and 1809 the citizens of Aichach had to billet a total of 18,699 officers and 194,086 soldiers. In the inn of the brewer Lorenz Alois Gerhauser on the town square lived u. a. the French general Saint Cyr and in 1799 the Cossack leader Rimsky-Korsakov .

Before 1800, the city was a maintenance office and belonged to the Munich Rent Office of the Electorate of Bavaria . Aichach had a city court with extensive magistral rights. Since 1862 the district office Aichach, precursor consisted of district Aichach . In the course of the district reform in 1972 , it formed the provisional "Augsburg-Ost district" with the Friedberg district and individual communities in other districts. This new district belonged to the administrative district of Swabia . The district was given its final name on May 1, 1973, Aichach-Friedberg district .

Population development in Aichach from 1840 to 2017

The city council consists of the 1st mayor and 30 city councilors. The three past local elections had the following results:

Description of the coat of arms : "In silver, a rooted green oak tree with five leaves and six golden acorns."

The coat of arms of Aichach is a talking coat of arms with the representation of the oak tree . The place name means "settlement near the oak forest". 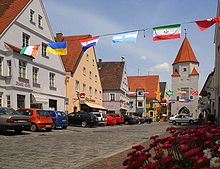 View of the lower gate 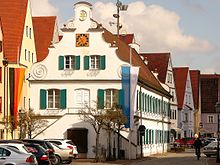 The forest adventure trail in the city of Aichach is located in the Aichacher Grubet.

The city park Aichach, which runs directly along the Flutgraben, was created in 2016. The new children's playground "Biberburg" is also located in the city park. The city park is an important link on the Paartalweg trail through Aichach, which will soon be completed in the course of flood protection. You can use this to hike from the Aichach sports airfield through the urban area to the Tränkmühle at the other end of the village, along the Paar and enjoy nature.

In the radio landscape of Aichach there are two local stations, hitradio.rt1 and Radio Fantasy , which have their own terrestrial frequencies. Other regional radio programs and stations with national and international coverage can be received via cable.

Since February 2011 there has been an internet television station Aichach.tv, which reports with regional news, reports, reports and talk shows from Aichach and the region.

Districts of the city of Aichach

Municipalities in the Aichach-Friedberg district