Mering is a market in the Swabian district of Aichach-Friedberg and the seat of the Mering administrative community . The town near Augsburg is economically a sub-center for the southern district.

The area has been around since around 3500 BC. Settled as a Neolithic village discovered in 1966 proves. Mering was first mentioned in a document in 1021. It was a property of the Swabian Guelphs . In 1167 the Staufer Emperor Friedrich I Barbarossa took over the Guelph house estates in Swabia by inheritance contract, which have now been added to the Staufer house estates. With the beheading of the Staufer King Konradin in 1268, the Bavarian dukes came into possession of the Mering estate for the first time. They endeavored to extend their sphere of influence into the Alemannic settlement area - up to the Lech. In 1704, during the War of the Spanish Succession , Mering was completely burned down by the English and Dutch.

Mering was a nursing office until 1779 and belonged to the Munich Rent Office of the Electorate of Bavaria .

In 1838 the community of Mering was given a coat of arms by King Ludwig I , which refers to the former Welfenburg and the battle on the Lechfeld in 955. On November 18, 1911, Mering was raised to the class of markets with urban makeup.

After around 700 years of belonging to the Bavarian dominion, Mering returned to a Swabian part of Bavaria in 1944 as part of the then still independent district of Friedberg (since the district reform in 1972 part of the newly formed district of Aichach-Friedberg ) . In the Merings catchment area the so-called Lechrain dialect is spoken, a Swabian dialect with strong Bavarian influences.

On July 1, 1972, the village of Baierberg was incorporated into the Mering market. It had previously formed an independent municipality in the Fürstenfeldbruck district together with Oberdorf (today near Mittelstetten ) .

Between 1988 and 2008 Mering grew by 3,573 inhabitants or about 37%. Between 1988 and 2019 the market grew from 9,535 to 14,852 by 5,317 inhabitants or 55.8% - next to Adelzhausen the strongest percentage growth in the district in the period mentioned. Due to the favorable transport connections to Augsburg and Munich , the population of Mering is constantly increasing:

Economy with agriculture and forestry

The place is bypassed in the west by the federal highway 2 leading to Augsburg . In a westerly direction, federal road 17 can be reached via Königsbrunn . The federal autobahn 8 , exit 76 ( Odelzhausen ), is about 19 kilometers northeast.

By Meringer municipality leading Munich-Augsburg Railway , at the Mering two stations exist, the station Mering where the Ammersee Railway of Mering about Geltendorf and Dießen after Weilheim begins and the breakpoint Mering-St. Afra .

On October 4, 1840, the private Munich-Augsburg railway company opened the Munich – Augsburg line , on which a train station was built in Mering. The station building was a three-story brick building. On June 1, 1846, the railway line was nationalized and taken over by the Royal Bavarian State Railways . On June 30, 1898, the Ammerseebahn was opened from Mering via Geltendorf to Weilheim, turning Mering station from a through station to a separation station . In the 1930s, the old three-storey station building was replaced by a low building that still serves as the station building today. The station originally had quite extensive track systems with five platform tracks as well as goods and stabling tracks. However, it was mainly served in regional traffic, only a few long-distance trains stopped. By September 7, 1970, the Ammerseebahn between Mering and Geltendorf was electrified in order to set up a diversion line for the busy Munich – Augsburg line. From autumn 2003 to 2007 the station was rebuilt and modernized as part of the four-track expansion of the Munich – Augsburg railway line, the freight and stabling tracks were dismantled. In December 2008, a stop was completed on the Munich – Augsburg railway line in the St. Afra district of Meringen.

Mering train station today has four platform tracks on two central platforms . It is served on the Munich – Augsburg line every half hour by the Fugger Express operated by Deutsche Bahn . Regional Express trains run under this name every hour from Munich to Ulm and Treuchtlingen, as well as regional trains or regional express trains from Munich to Dinkelscherben and Donauwörth every hour . The trains are each winged in Augsburg main station . During rush hour, additional regional express trains run between Munich and Augsburg. The Bayerische Regiobahn (BRB) runs on the Ammerseebahn every hour between Augsburg-Oberhausen and Schongau . In the rush hour, the BRB uses hourly repeater trains between Augsburg and Mering, some of which continue to Geltendorf. This means that between Augsburg and Mering there is an arithmetical 20-minute cycle throughout the day and sometimes a theoretical 10-minute cycle during rush hour. Long-distance trains do not stop in Mering.

With the exception of the individual Regional Express repeater trains between Munich and Augsburg, all trains that serve Mering station also stop at Mering-St. Afra. The stop has two platform tracks, which are located on a central platform.

Mering is connected to the Augsburger Verkehrsverbund (AVV) with the R1 ( Munich – Augsburg railway ) and R11 ( Ammerseebahn ) lines. In addition, the community is served by eight bus lines, seven of which run by DB Regio Bus Bayern GmbH (DRB) in the AVV. They connect Mering with Augsburg or the surrounding communities and districts. Another bus line belonging to the Landsberger Verkehrsgemeinschaft (LVG) runs to Landsberg am Lech . The hub of local transport is the Mering train station, which was supplemented in 2005 by a high-performance bus station in the immediate vicinity.

The nearest commercial airport with regular scheduled connections is Munich Airport , which is around 50 minutes away by car (around 80 km). The airport Augsburg (no regular service) is about 30 minutes by car.

Until 2003 there was a district hospital in Mering. This was closed in the course of the austerity measures in the health system and converted into a health and social center. The following facilities can now be found there:

Basic medical care in Mering is assured in all important areas. Numerous general practitioners and specialists are based in the municipality. Due to the close proximity to Augsburg and Munich, there is also a large selection of specialized doctors and clinics available.

Due to the importance of Mering as a sub-center for the southern district, the Mering volunteer fire brigade is well equipped.

There are two old people's homes in the municipality:

In 2014 the following places were available in Mering:

The primary school Amberieustraße, the Staatliche Realschule, the Gymnasium Mering as well as the Kindergarten St. Margarita and the childcare facility Kinderhaus Mering together form the Meringer school and sports center . There are also sports facilities and playgrounds in this area.

In addition to the Catholic denomination that has existed since the town was founded, there has been an Evangelical Lutheran parish in Mering since 1945. This participates in cultural life in the village, among other things, with activities such as the 2007 Culture Autumn with performances and auditions in the Protestant church on Martin-Luther-Straße.

Another religious community is the New Apostolic Church ( KDöR in Bavaria since December 1983) with its own church building on Josef-Scherer-Straße (until May 2008 Kanalstraße). In 2007, the church members from the neighboring town of Kissing were integrated into this congregation .

The world's smallest opera with regular performances is in Mering. The Multum in Parvo Opera House maintains the classic paper theater and shows operas in abbreviated form almost every weekend of the year, which are brought to life on the small stage with flat figures and opulent stage sets including sophisticated lighting effects. The repertoire currently includes nine opera classics from “Aida” to “The Magic Flute”. After each performance, the opera house operators offer their audience the opportunity to take a look behind the scenes.

In 2016, the world's first international opera festival for paper theater took place in Mering, which was very well received by the audience. The organizer was the non-profit Meringer association Opera in Stellis e. V. There will be a sequel in 2018.

In the school and sports center, the market has:

In addition, there are: 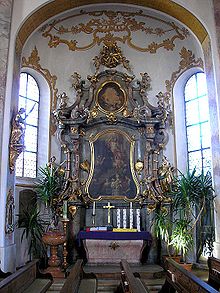 View to the altar of the north chapel in the parish church of St. Michael

Districts of the market Mering

Municipalities in the Aichach-Friedberg district