Brixlegg is a market town (since 1927) with 3012 inhabitants (as of January 1, 2020) in the Kufstein district of the state of Tyrol , Austria . The community is located in the judicial district of Rattenberg .

Brixlegg is located in the Tyrolean Lower Inn Valley at the entrance to the Alpbach Valley . The site is one of the oldest settlement areas of the Unterinntal represents. Brixlegg is about Inntalautobahn A 12 and the Unterinntalbahn with train port accessible (see Brixlegg station ). The district of Zimmermoos is scattered on the slope with a few farms.

The community consists of the cadastral communities Brixlegg and Zimmermoos.

∗ Radfeld is located in the Inn valley behind Rattenberg, bordering in the mountainous region east of Rattenberg

During the Second World War, the site was largely destroyed by bombing. The approximately 150 m long railway bridge was also the target of several bombs and was ultimately blown up. It was rebuilt in 1948. The Grasegg and Lanegg residences and the coppersmith's house from the 17th century have been preserved.

The municipal council has 15 seats:

Brixlegg maintains a partnership with Aichach in Swabia , the birthplace of Ludwig Steub, and since 1982 with Matzen-Raggendorf in Lower Austria . 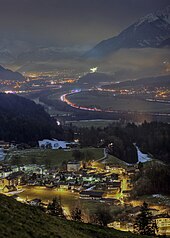 The Montanwerke Brixlegg , which emerged from the smelting works, are today the only copper works in Austria and an important employer in the region. Through various measures, emissions from the plant could be reduced considerably at the end of the 20th century. today, copper is no longer mined here, but old copper is processed.

In the 1980s, Montanwerke Brixlegg had a negative impact due to the greatly increased PCDD loads in the vicinity of the company and in the bodies of some residents. In some cases, air concentrations of 2.56 picograms per cubic meter of breathing air were measured near the company premises. The contamination of the area was directly linked to the Brixlegg coal and steel works.

Other employers are the textile industry (Giesswein), bottling of natural mineral water and the production of non-alcoholic beverages (Silberquelle) and tourism (focus in winter) in the catchment area of ​​the Kramsach and Alpbach ski areas . The medicinal sulfur spring Bad Mehrn is used for therapeutic purposes.

Brixlegg is internationally known, especially in the skateboard scene, as there is a cradle skate park in Brixlegg , the construction of which is unique in Europe. The most outstanding feature of the park is the eponymous cradle (a kind of half ball made of concrete in which skateboarders can ride almost upside down due to centrifugal force).

Personalities who worked on site or who lived here