The title of this article is ambiguous. Further meanings are listed under Kirchbichl (disambiguation) .

Kirchbichl is a municipality with 5858 inhabitants (as of January 1, 2020) in the Kufstein district , Tyrol ( Austria ). The community is located in the judicial district of Kufstein . 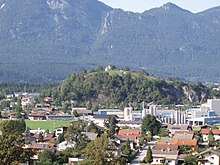 The community consists of a single cadastral community of the same name .

The Grattenbergl, where the largest settlement in North Tyrol was in the Hallstatt period , was, among other things, the scene of the Tyrolean struggle for freedom against the Bavarian and French troops. Kastengstatt was known for iron processing from the Jenbach smelter . The hamlet was also a staging area and shipbuilding site for the Inn shipping.

The municipality joined the Tyrol Climate Alliance in 1999 .

Kirchbichl is on the Tiroler Straße B 171 (Kufstein - Wörgl - Innsbruck - Landeck), on the Loferer Straße B 178 (Kirchbichl - St. Johann in Tirol - Lofer), on the Inntal Autobahn A 12 (exits Kirchbichl and Wörgl-Ost) and on two railway lines, namely the Unterinntalbahn (Kufstein - Wörgl - Innsbruck) and the Giselabahn (Salzburg - Bischofshofen - Zell am See - Kitzbühel - Bruckhäusl - Wörgl), a section of the Austrian Western Railway. Both railway lines meet in the neighboring main station in Wörgl .

Kirchbichl train station is on the Unterinntalbahn and the “Wörgl Süd - Bruckhäusl” stop is on the Giselabahn. The latter is located in the urban area of ​​the neighboring municipality of Wörgl , near the municipal boundary in the “Wörgl Boden” district, which together with the “Kirchbichl Boden” district bears the common field name “Bruckhäusl”. Both stations are controlled from Wörgl main station and the express trains of the Tyrolean S-Bahn stop at both : the S1 line in Kirchbichl station, the S6 in Wörgl-Süd / Bruckhäusl and also regional and some regional express trains. The closest express train stop is the main railway station and railway junction at Wörgl Hbf .

In addition to three platform tracks for passenger traffic, there are also extensive goods loading systems in Kirchbichl station, especially for the cement industry located here. Several freight trains end and start there on weekdays.

The Kirchbichl Triathlon takes place every summer and in 2017 this sporting event was held for the 32nd time.