The Kufstein district is a political district in the Austrian state of Tyrol .

In the north it borders on the Free State of Bavaria ( Miesbach , Rosenheim and Traunstein district ), on the southwest by the Schwaz district and in the southeast of the district Kitzbuehel .

The Kufstein district was in Bavarian hands for a long time before it came to Tyrol in 1506 with the Kitzbühel district (then the three courts of Kufstein, Rattenberg and Kitzbühel ) and thus later to Austria.

The district's predecessor was the Bavarian Regional Court of Kufstein between 1805 and 1814, which also included the present-day Bavarian communities of Kiefersfelden , Oberaudorf and parts of Flintsbach am Inn . When Kufstein was again added to Austria by the Ried Treaty , the Kufstein judicial district was established in 1849 . In the course of the separation of the political from the judicial administration, this was then merged from 1868 together with the judicial district of Rattenberg to form the political district of Kufstein.

Today it is the third most populous district in Tyrol and a rapidly growing district. Kufstein and Wörgl are among the largest cities in Tyrol, together with the neighboring communities of Ebbs, Kirchbichl, Langkampfen and Kundl, they form the center of the district in terms of economy and population.

The district with an area of ​​968.82 km² is part of the Euregio Inntal and the European region Tyrol – South Tyrol – Trentino .

The Inntal Autobahn A 12 and the Westbahn run through the district (from Wörgl main station with one branch via Zell am See and one branch via Kufstein to Salzburg). In Langkampfen there is a small airfield that is mainly used by glider pilots. The major airports of Innsbruck, Salzburg and Munich are each around 100 km away. From Kufstein to Niederndorf there was a tourist-oriented Inn shipping until 2011, due to a lack of passengers this was discontinued after 14 years of operation.

The district mainly comprises the lowest part of the Tyrolean Lower Inn Valley up to the Bavarian border and the side valleys Alpbachtal , Brandenberger Tal , Wildschönau , Thierseetal , the Untere Schranne and parts of the Kufstein basin are already in the Alpine foothills .

In terms of mountains, he has a share in the Brandenberger Alps , the Kitzbühel Alps , the Kaiser Mountains and the Chiemgau Alps .

From the town of Kufstein downwards, the valley floor is below 500 meters above sea level.

The economy in the district is mainly characterized by the service sector, here trade and tourism are predominant. Important industrial locations are Kundl, Kufstein, Wörgl and Brixlegg. The largest production companies are in the pharmaceutical industry, manufacture of rubber and plastic goods and the construction industry.

The district has a relatively high proportion of out-commuters, especially to the neighboring districts and Innsbruck.

The Kufstein district is divided into 30 communities . These include three cities and two market towns . The population figures are as of January 1, 2020. 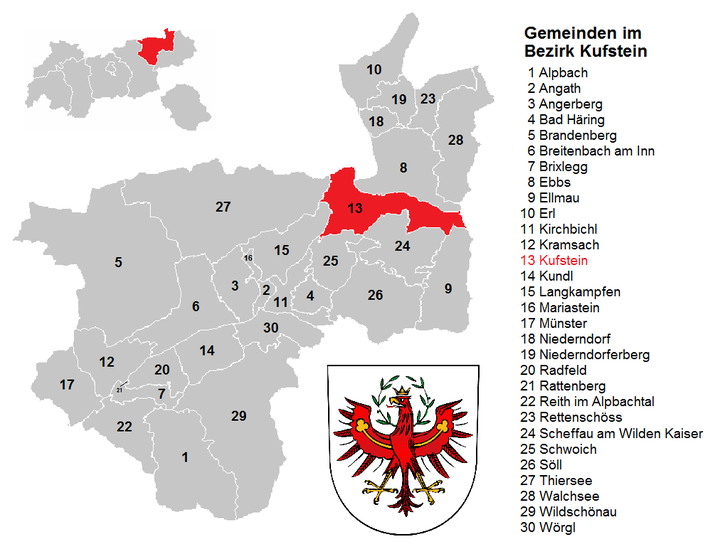 The district is divided into six planning associations, three of which also include municipalities in the Kitzbühel district:

Districts and statutory cities in Tyrol