Reith im Alpbachtal is a municipality with 2758 inhabitants (as of January 1, 2020) in the district of Kufstein in the state of Tyrol ( Austria ). The community is located in the judicial district of Rattenberg .

The place is at the entrance to the Alpbachtal , which branches off from the Lower Inn Valley at Brixlegg . The municipality extends from the Inntalboden to the border with the municipality of Alpbach and up to the Kerschbaumer Sattel (transition to the Zillertal ).

The town center with the Reither See bathing lake is located on a wide terrace at the entrance to the valley. Reither See and Egelsee are characteristic funnel-shaped depressions in the plateau, which were probably created by the glacial leaching of gypsum lenses .

Due to the scattered farmhouses in the vast area of ​​the municipality, the municipality has one of the largest freight road networks in Tyrol. This places a heavy burden on the community budget.

The community consists of the cadastral communities Hygna, Reith and Scheffach.

Reith is a very old settlement that was first mentioned as " Rîute " around 960 . In the 15th – 19th In the 19th century, silver and copper mining was carried out in the area of ​​the Reither Kogel ( 1336  m ) near St. Gertraudi. For a long time, mining was the largest silver and copper mine in Tyrol after Schwaz . Mining has stopped, there are still large stocks of barite , but due to global competition it is currently not worthwhile to mine.

From 1952 to 1975 the municipality was called Reith bei Brixlegg , but changed its name - mainly for tourist reasons - to Reith im Alpbachtal. In addition to agriculture, tourism plays a major role today, with overnight stays being roughly equally distributed over the winter and summer seasons.

In 1979, Reith im Alpbachtal was named "Most beautiful flower village in Europe" by the Entente Florale Europe . This award was based on the wonderful balcony flower decorations, which are still one of the most beautiful in the Tyrolean lowlands, as well as on the well-tended flower islands in the local area and the beautiful townscape as a whole.

Blazon : The shield, divided diagonally to the left in white (silver) and red, shows a green tree in the white field and a golden plow in the red field .

The municipal coat of arms, awarded in 1954, symbolizes with the tree and the plow the origin and the name of the place, which means "clearing". 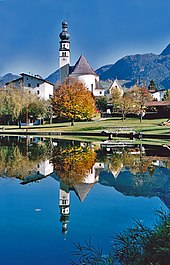 Reith is connected to Brixlegg and Alpbach by the Alpbacher Straße (L 5), which runs past the town center to the east.

Reith from the Reitherkogelbahn, an 8-person leads gondola , on the Reither Kogel. It opens up a small ski area in winter and a hiking area in summer.