Barite , also known by its synonym barite and its chemical name barium sulfate , is a frequently occurring mineral from the mineral class of " sulfates and relatives" ( see classification ). It crystallizes in the orthorhombic crystal system with the chemical composition Ba [SO 4 ], whereby barium can also be replaced by strontium ( Diadochie ).

Barite mostly develops tabular to prismatic crystals , but also massive mineral aggregates that are colorless or white in pure form, but can also take on many other colors through foreign admixtures.

Barite was named after the Greek word βαρύς [barýs] for heavy due to its relatively high density of 4.5 g / cm 3 for a mineral . The mining term Schwerspat also indicates this property.

The name Baryt is first mentioned by Dietrich Ludwig Gustav Karsten in the first edition of the Mineralogical Tables (Berlin, 1800) that he wrote.

In the now outdated, but still in use 8th edition of the mineral classification according to Strunz , the barite belonged to the mineral class of "sulfates, selenates, tellurates, chromates, molybdates, wolframates" and there to the department of "anhydrous sulfates without foreign anions ", where it was classified as Namesake of the "Barytgruppe" together with Anglesit , Coelestin and Hashemit formed an independent group.

The 9th edition of Strunz's mineral systematics , which has been in effect since 2001 and is used by the International Mineralogical Association (IMA), also assigns barite to the class of "sulfates (selenates, tellurates, chromates, molybdates and tungstates)" and there in the department of “Sulphates (selenates etc.) without additional anions, without H 2 O”. However, this section is further subdivided according to the size of the cations involved , so that the mineral can be found according to its composition in the sub-section “With only large cations”, where the “barite group” with the system no. 7.AD.35 and the other members Anglesite, Celestine and Olsacherite .

The systematics of minerals according to Dana , which is mainly used in the English-speaking world , assigns barite to the class of "sulfates, chromates and molybdates" and there in the "sulfates" category. Here, too, Baryt is the namesake of the "Baryt group" with the system no. 03/28/01 and the other members Celestine and Anglesit can be found in the sub-section " Anhydrous acids and sulfates (A 2+ ) XO 4 ". 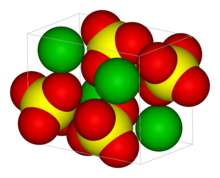 The anion complex [SO 4 ] 2− forms a slightly distorted tetrahedron with sulfur in the center and oxygen at the four corners. Within the anion complex there is a covalent bond , whereas there is an ionic bond between the barium 2+ ion and the 12 surrounding oxygen ions .

Some bartes show a yellowish, orange or pink fluorescence in UV light. Occasionally, phosphorescence can be observed in short-wave UV light .

Barite is almost insoluble in water and therefore, unlike other barium compounds, is not toxic. It is also quite chemically stable and only dissolves slowly in hot, concentrated sulfuric acid . When heated, the mineral tends to crack and produce a yellow-green flame color. 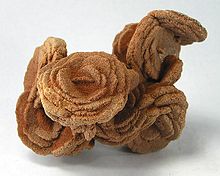 Radiobaryt contains small amounts of radium in the per thousand range, which partially replace the barium in the structure. Depending on the radium content, it can be the strongest natural radioactive mineral; 31.8 MBq / g were detected in a single sample. Barytes with more than 70 Bq / g are generally already addressed as radio barytes.

In a desert-like climate, a special form of growth in which grains of sand are enclosed between the tabular crystals, the so-called barite roses. These resemble the sand roses and are formed under similar conditions.

As Hokutolith one is lead-based and sometimes radium-containing barite variety called.

Barite is formed from hydrothermal solutions or sedimentary, sometimes with the help of biological processes. It is mainly associated with calcite , dolomite , fluorite , galena , gypsum , rhodochrosite , sphalerite and stibnite , but can also be found together with many other minerals.

The most important deposit types are SEDEX deposits . Since barium sulphate is very difficult to dissolve, the mineral often precipitates in places where solutions rich in barium and sulphate mix. The submarine SEDEX deposits are formed when ascending barium-rich hydrothermal solutions are mixed with sulfate-containing seawater. This type of deposit can contain several million to billions of tons of barite, which are often, but not always, associated with Pb-Zn-Ag-containing massive sulphides. Examples are the deposits in the Brooks Range in Alaska with around two billion tons of barite, the Nevada barite belt in the USA or the Meggen and Rammelsberg deposits in Germany (both closed).

Dike deposits form on crevices in a wide variety of rocks. The corridors can be several meters thick and contain several million tons of barite. In addition to barite, fluorite , quartz , calcite and various sulfides are often found in the corridors .

Barite and fluorite from the La Cabaña mine, Ribadesella, Asturias, Spain

In Germany, barite is currently being mined in the Clara mine in Oberwolfach in the Black Forest .

In 2013, the mining of fluorite and barite began in the Precipitation mine near Bärenstein in the Ore Mountains .

The Gehren deposit near Ilmenau in the Thuringian Forest was developed from 2005 to 2008 and is currently idle due to a lack of sales.

Until June 2007, barite was extracted from the Wolkenhügel mine in Bad Lauterberg in the Harz Mountains and in the Dreislar heavy spar mine in the Sauerland , and until 1997 in the Käfersteige mine in the area of ​​the city of Pforzheim . The Brunndöbra deposit in the Saxon Vogtland and the Mommel and Hühn deposits in the Trusetal in Thuringia were in operation until 1991 . Less significant areas were in the Richelsdorf Mountains near Sontra , in the Spessart near Lohr am Main (e.g. near Rechtenbach , Partenstein and Frammersbach ) and in the Saarland near Nohfelden-Eisen . Between the villages of Aue and Haindorf (Schmalkalden) there was a heavy spar mill, the "Auehütte", from 1887 to 1978. The train station still bears this name today. It was set up in 1887 by the Utendörffer family in the building of the rolling mill of a previous iron smelter. It closed as VEB in the GDR in 1978. In Hartenrod, today Bad Endbach in the Marburg-Biedenkopf district (Hesse), a high-quality deposit of heavy spar was mined in the "Bismarck" pits from 1884 and "Koppe" from 1919 to 1957 and in the adjacent spat mill processed. In the Odenwald , barite was mined at three important locations between 1800 and 1939 : in Schriesheim an der Bergstrasse along the clefts of the Schriesheim Formation , in Klein-Umstadt (today a district of Groß-Umstadt ) (from 1839 to 1931 around 650,000 tons of barite-containing rock) and in the central area of ​​the Odenwald around Reichelsheim between Ober-Kainsbach and Ober-Easter .

Alston Moor , Cumbria , Frizington , Mowbray and Isle of Arran (whose occurrences have been known since 1770) in Great Britain, Iglesias in Sardinia , Baia Sprie and Cavnic in Romania , Banská Štiavnica in Slovakia , Dědova hora and Příbram in the Czech Republic , and Elk Creek / South Dakota in the USA .

In total, barite has so far (as of 2011) been detected at around 8600 sites, including rock samples from the Mid-Atlantic Ridge and the Central Indian Ridge and at several locations in the Pacific Ocean . Outside the earth, barite was still found on the moon , more precisely in the rock samples near the landing sites of Luna 16 ( Mare Fecunditatis ), 20 and 24 ( Mare Crisium ).

The main use for barite is in deep drilling technology as an additive for drilling fluids . The reason for this is the high density of the barite, with which a high gravity pressure is achieved in the liquid, which stabilizes the borehole and enables the rock crushed by the drill bit to be transported to the surface of the earth.

Baryte is also used to produce white pigments such as lithopone and photographic papers and is also listed in the Color Index under CI Pigment White 22 and CI 77120. It is just as part of heavy concrete as it is of contrast media in X-ray examinations of the stomach. Barite is also mined as a raw material for the extraction of barium.

In the automotive industry, barite is added to plastics and insulating mats to reduce sound permeability.

Barite is only rarely used as a gemstone because it is too soft ( Mohs hardness 3 to 3.5) and sensitive (perfect cleavage). Collectors prefer to cut it in the shape of a faceted octagon.

Barite is used as an aggregate to reduce the radiation permeability of concrete (barite concrete). Areas of application are, for example, walls in X-ray rooms in hospitals or treatment rooms in radiation therapy.