The ionic bond (also ionic bond , heteropolar bond or electrovalent bond ) is a chemical bond that is based on the electrostatic attraction of positively and negatively charged ions .

The ionic bond was formulated by Walter Kossel around 1916 . From an electronegativity difference of ΔEN = 1.7, one speaks of a 50% partially ionic character. If the difference is greater than 1.7, there are ionic bonds, so there is an ionic bond that consists entirely of halogens and this ionic bond is astat fluoride ( At + F - ) ( ΔEN = 1.78 ). Below this value there are polar , i.e. predominantly covalent , bonds. However, these are relatively arbitrary limits, since the case of the pure ionic bond represents an idealization. As a rough guide, there is an ionic bond between elements that are on the left in the periodic table (PSE) and elements that are on the right in the PSE. If you look at the ionic bond content of sodium chloride , for example , which is often viewed as a classic case of ionic bond, you will find a value of around 75 percent. Another example would be cesium fluoride at about 92 percent. Ionic bonds therefore also have a share of covalent bonds in all cases. The reverse does not apply, because the 100 percent covalent bond exists within so-called element molecules .

The bond is created by the electrostatic attraction of oppositely charged particles. The ions are regularly arranged in an ion lattice and they often form crystals. Their structure depends on the charge and the proportions of the ions. Ionic bonds have high melting and boiling points. The strong attractive forces between the particles can be caused by solvents, e.g. B. water to be overcome. Solid (crystalline) ionic compounds do not conduct electricity. In the dissolved or molten state, they conduct electricity because the electrically charged particles can then move freely.

Example: Formation of sodium chloride from the elements

By accepting or releasing electrons, the atoms strive to achieve the noble gas configuration and the lowest energy state for their outermost occupied shell . This is achieved either through the release of electrons by the elements with lower electronegativity (left in the PSE), which creates single or multiple positively charged cations . In the other case, electron uptake by the elements with higher electronegativity and thus high electron affinity (elements on the right in the PSE) results in single or multiple negatively charged anions .

Formation of the ion lattice 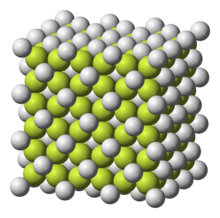 The cations and anions attract each other electrostatically ; the energy released when the two types of ions combine is called the lattice energy and is the actual driving force behind salt formation . The grid energy is made up of a total of 4 components:

The lattice energy can be determined empirically using the Born-Haber cycle . Theoretical determination is made by the Born-Landé equation and Kapustinskii equation .

Since the electrostatic field extends evenly in all spatial directions, very regular ion grids are created. Due to the different ionic radii , however, there are different ionic structures: common salt (NaCl), cesium chloride (CsCl), zinc blende (ZnS) and fluorite structure (CaF 2 ) as well as others that are named after the characteristic representatives. The relative stabilities of the different types of lattices as a result of different coordination geometries and coordination numbers of the ions are reflected by the Madelung constants ; these are characteristic of the respective structure.

The ionic bond in the poem

The chlorine said to the sodium:
You’re getting too stupid again!
First you take an electron from me,
then you want to connect here!
I praise the hydrogen,
there is absolutely no trouble with it .
You just split the electrons
and ions have no chance.