View from Hainzenberg into the Zillertal near Zell am Ziller

The Zillertal is a southern side valley of the Inn Valley in the Austrian state of Tyrol .

The Zillertal branches off from the Inn Valley about 40 km east of Innsbruck , near Jenbach . It is the widest of the Inn's southern side valleys . It takes its name from the river Ziller , which runs from south to north and flows into the Inn at Strass in the Zillertal . In a narrower sense, the valley extends from Strass to Mayrhofen . There it divides into the Tuxertal , the Zemmtal , the Stilluptal and the Zillergrund . The uninhabited Märzengrund and the Finsinggrund with the Hochfügen-Hochzillertal tourist settlement branch off from the northern valley at Kaltenbach, and the Gerlostal at Zell am Ziller to the Gerlospass in Salzburg's Oberpinzgau .

The valley separates the Tux Alps in the west from the Kitzbühel Alps in the east. In the south, on the border with South Tyrol , are the Zillertal Alps with the Zillertal main ridge . The Tuxer Kamm (also Tuxer Hauptkamm ) extends to the north of it and on the orographically right side of the Tuxertal . On its left side (further north) is the main ridge of the Tux Alps, where the soft rocks of the quartz phyllite and greywacke zone predominate. The Zillertal Alps Nature Park takes up around 35% of the Ziller catchment area.

In contrast to other Tyrolean side valleys, the Zillertal does not overcome a valley and only rises slightly from Strass im Zillertal (522 m) to Mayrhofen (628 m). Between Aschau im Zillertal and Zell am Ziller, the valley narrows to about half the width ( front and rear Zillertal ).

The old town centers are mostly on the alluvial cones of the side streams. In the meantime, the valley floor is also used for settlements and in particular for industry and commerce. Scattered settlements and individual farms stretch far up the slopes and merge into the alpine region.

In the Zillertal and its side valleys there are 25 communities that  belong to the Schwaz district and together form the Zillertal planning association with 37,276 inhabitants (as of January 1, 2020) and an area of ​​1097.2 km². About 10% of the area is permanent settlement . With the exception of Strass and Schlitters at the end of the valley, all the communities in the valley belong to the judicial district of Zell am Ziller . The largest communities are Fügen (4200 inhabitants) and Mayrhofen (3937 inhabitants). The economic, administrative and school center of the valley is Zell am Ziller with the seat of the district court and numerous public institutions.

The Zillertal has an inner-alpine valley climate and lies in the transition area from the dry climate of the Ötztal and Stubai Alps to the more humid one of the Zillertal Alps and the Hohe Tauern . Typical are a strong temperature amplitude, lots of sun in winter, weak winds and hardly any fog. The mean annual precipitation in Zell am Ziller is 1070 mm, in Mayrhofen 1044 mm.

First finds from the Middle Stone Age at the Tuxer Joch show the early importance of this transition between the Wipptal and the Zillertal. The first thin settlement probably took place in the late Bronze Age (1200 to 800 BC). Settlements from the younger Iron Age (500 BC) were also found. Many place names point to pre-Roman and pre-Germanic language roots. Around 15 BC The Romans conquered the Alpine region as far as the Danube. Tyrol belonged to the provinces of Raetia in the west and Noricum in the east. At that time the Ziller probably formed the border between the two provinces. The native population was gradually Romanized. The Bavarians immigrated from the north around 560 . Many settlement names have a Bavarian language root.

The valley was first mentioned in a document in 889 as " Cilarestale ". A series of donations established the rich property of the Salzburg archbishops. The farms and goods were administered by the Meierämter in Zell, Schwendau and Fügen . Christianization took place in the 8th century. In 739, following the Roman provincial borders, the diocese borders between the diocese of Säben-Brixen and Salzburg were established, as they are still valid today, with the Ziller forming the border river. This can still be seen today, on the western side of Brixen (today Diocese of Innsbruck ) the church towers are predominantly red, on the eastern side of Salzburg they are covered in green. The green color is due to the use of copper for the roofs, which the (richer) diocese of Salzburg could use for its churches, while the diocese of Bressanone had to be more economical and worked with tile roofs . 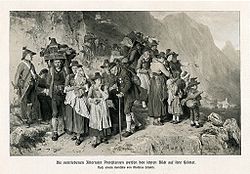 Mathias Schmid :
The expulsion of the Zillertal Protestants

With secularization, the Ziller then formed the border between Tyrol (1803) and Bavaria (1810). In 1816, the Salzburg part of the Zillertal was united with the Kronland Tyrol and thus with Austria. The miners brought the Lutheran doctrine to the Zillertal, which was especially widespread in the inner valley. The Zillertal Inclinants , as the Zillertal Protestants were called, were eventually persecuted and forced to emigrate in 1837. They found a new home in Prussian Silesia , where they founded the town of Zillerthal-Erdmannsdorf . When Soviet troops advanced into their settlement area at the end of the Second World War , the descendants of the Zillertal inclinants were forced to leave this second home as well and were then dispersed all over the world.

In the 19th century the Zillertal was described by several travel writers. The Zillertal traveling traders, "farmer doctors" and singer families were known. In the second half of the 19th century, mountain climbing began as a popular sport with the establishment of shelters and paths. The winter tourism development began in 1953/1954 with the construction of the Gerlosstein ski area , today Zillertal Arena , which was soon followed by other lifts, and the opening of the Mayrhofner Penkenbahn in 1954. The use of water power took place on a large scale from the 1970s.

Tourism is particularly important in economic terms, with around 7.2 million overnight stays per year, of which the focus (4.5 million) is on winter tourism (as of 2013). There are more than 50,000 guest beds and 670 kilometers of ski slopes available for tourists.

In terms of agriculture, grassland management with milk production and cattle breeding, sheep breeding, cultivation of green maize and alpine farming should be mentioned. In addition, the timber industry has always had a high priority in the Zillertal, and there are still numerous large sawmills there. Until 2013 , the wood was mostly transported on the Zillertal Railway; the wood transport was also one of the main reasons for the construction of the Zillertal Railway. In particular in the front and middle part of the valley there are important commercial and industrial companies. In the Gerlostal and in the back grounds, the electricity industry is predominant.

The Zillertal has several large reservoirs that are used to generate energy. This includes:

The steam locomotive No. 5 of the Zillertal Railway

The Zillertal can be reached by public transport via the Zillertalbahn , which runs from Jenbach train station (located on the Unterinntalbahn ) to Mayrhofen and has been offering frequent regular services since 2009. Freight traffic is also handled on this narrow-gauge line, which is currently being selectively expanded to double-track. A regular bus service is offered in the side valleys and as a supplement to rail traffic.

The Zillertal is accessible via the Zillertalstraße (B 169), which offers a connection to the Inntal motorway. Gerlosstraße (B 165) branches off from Zell am Ziller . The Zillertaler Höhenstraße is a winding, toll road with a view; other toll roads lead to the Zillergründl and Schlegeisspeicher in summer.

Together with the Ahrntal on the South Tyrolean side, the Zillertal was repeatedly planned as part of a transalpine traffic connection. At the beginning of the 20th century there were plans for a road connection over the Pfitscher Joch or for a Zillertal-Ahrntal railway with a 19 km long tunnel under the Schwarzenstein . In 1978 the construction of the Alemagna motorway ( Autostrada A27 ) began, which ends today when coming from the south at Ponte nelle Alpi and, according to Italian plans, should continue via Toblach  and through the Zillertal to Munich. The reasons for this planning were the relief of the Brenner route and the shortening of the Venice – Munich route, especially for freight traffic.

Mountain station and 8er Alm in the Hochfügen-Hochzillertal ski area

With the advent of alpinism in the middle of the 19th century, tourism increased steadily. The Zillertal became one of the birthplaces of alpine mountaineering - initially with local mountain guides, but soon English and German mountaineers discovered the Zillertal for themselves. The winter tourism development of the Zillertal began in 1949 with the construction of a drag lift in Hintertux and Lanersbach and, subsequently, in 1953/54 with the construction of the Penkenbahn in Mayrhofen.

Today the Zillertal is divided into four holiday regions:

The majority of the population belongs to the Catholic Church , which also plays a central role in cultural life. The eastern part of the Zillertal with the municipalities of Gerlos , Zell am Ziller , Hart , Brandberg , Stumm and Mayrhofen , belongs to the Archdiocese of Salzburg, while the western part with the municipalities of Fügen and Tux is assigned to the diocese of Innsbruck , which includes the western and central parts of Includes North Tyrol to the Ziller River and East Tyrol .

There is a long tradition of folk music in the Zillertal. Various folk festivals and church festivals are celebrated from the beginning of May to the end of October, such as the “Zillertaler Gauder Fest”, which is one of Austria's oldest and largest spring and traditional costume festivals. In September, traditional cattle drives, the "Schaflschoade" take place.

The Zillertal Alps Nature Park is located in the rear of the Zillertal. It begins near Mayrhofen and is then divided into ten different side valleys. After an expansion on the Tux main ridge in 2016 (42 km²), it extends over an area of ​​422 km² in the area of ​​the five nature park communities Brandberg, Finkenberg, Ginzling (fraction), Mayrhofen and Tux. The lowest point is near Ginzling, at approx. 1000 m above sea level, the highest point is the top of the Hochfeiler at 3509  m . There are around 80 glaciers in the nature park region. These cover an area of ​​approx. 40 km². Other special features of the nature park are:

The Zillertal is the origin and home of well-known Tyrolean natural products such as B. Zillertal hay milk cheese and Zillertal gray cheese, which are produced by the dairies located in the Zillertal. Despite the extreme additional effort involved in cultivating hay, 380 farmers and the dairies have decided to keep this form of near-natural cultivation and to completely forego fermenting feed. The processed milk comes from cows that feed exclusively on fresh alpine grass, herbs and flowers. Other regional specialties are Zillertal donuts or Schliachta noodles.

The Zillertaler Doggl is a traditionally made shoe made of loden.