Sculpture by Leo Slezak in the Rottach-Egern spa gardens .

Leo Slezak was born the son of a miller in Mährisch-Schönberg . His childhood was marked by material hardship. As a rather poor and disciplinary “difficult” student, he had to finish secondary school prematurely. He then briefly tried an apprenticeship as a gardener in Gmunden am Traunsee , after which he learned a machine fitter for three years in Brno. During this time his enthusiasm for the theater grew, especially for comic roles. He became an extra through a choir singer at the city theater. One evening he “shouted the choir passages that had stuck in his ear” during a performance of “Bajazzo”, during which the baritone Adolf Robinson became aware of him, who accepted and trained him as a student. Since singing did not go well with the job of a machinist, he went to the military and then got by with odd jobs as a clerk in a law firm and a representative “for Powidl ”.

He made his debut in Brno in 1896 as Lohengrin , in 1898 he went to the Royal Court Opera in Berlin , but was not employed, which is why he moved to the theater in Breslau after just one year . Here he met his future wife, the actress Elsa Wertheim (1874–1944). This was followed by guest appearances in London and Vienna , where he was enthusiastically celebrated. From September 1901 he was a permanent member of the ensemble of the Vienna State Opera ( honorary member in 1926 ) and his successful career began, initially in the German-speaking area. In 1907 he studied with the famous tenor Jean de Reszke in Paris in order to sing his roles in the original language, especially in Italian (Donizetti, Verdi, Puccini, Leoncavallo etc.) and French operas (Meyerbeer, Halévy, Bizet, Boieldieu, Delibes etc.) to be able to, with which he purposefully created the basis for an international career. In 1909 he got a three-year contract with the Metropolitan Opera in New York City and was hailed as a Wagner and Verdi singer. When the First World War broke out during a guest performance in Russia , he had to flee and was welcomed back by the Viennese with open arms. Not only on the opera stage, but also as a lieder singer, he was successful worldwide. In April 1934 he took the stage of the Vienna State Opera for the last time as Otello .

Slezak's voice was a heroic tenor , his pianissimo was legendary, even on the technically inadequate recordings of his time, his voice fascinated with its amazing intelligibility, among other things. With a height of 195 cm and a weight of around 150 kg, it was also a striking appearance.

Countless anecdotes, the truth of which is not always beyond doubt, tell of Slezak's humor, which never left him on stage either. This is how Der Zwiebelfisch - A small magazine for books and other things reported in 1922:

Leo Slezak recently performed as Lohengrin in an Upper Austrian theater. The precision of the technical workers was not exactly uplifting, and it so happened that the swan departed before Slezak had knightly mounted it. The tenor did not lose his composure, turned to the scenery and called: "Here you go, you there, when is the next swan going?"

No less famous was Slezak's story, published in his debut book My Complete Works (1922), of how he failed as a very young beginner in Bayreuth . On the last day of the festival, he was allowed to audition at a “ Rheingold ” rehearsal for Cosima Wagner, who is interested in young talents . You asked him:

"So, my dear Mr. Sle - Sle - zak, what are you going to sing for me?"
I, who wanted to show myself from all possible sides, including as a dramatic singing actor, said with full confidence: "The ' Bajazzo ' aria."
General, paralyzing horror spread in the gym. General Music Director Kniese gasped for air - the 'thunder' on the podium gave up its pose and staggered. Even the servant looked disturbed for something to hold on to. Frau Wagner was also amazed, and after a long pause she said, rather reserved, that it would be more desirable - if I sang something by the master - whether I could only be Bajazzo - and what I had already sung by Wagner. Intimidated and suspecting that I had done something exemplary stupid, I named Lohengrin , Dutchman and the happy in "Rheingold". It was decided in favor of the glad.
After Mr. General Music Director Kniese had been refreshed with a sip of cold water, he went to the piano. I should sing the passage: “The bridge leads to the castle” - which only moves in the lower and lower middle register. Today, as a mature singer, with whom the organ has already settled, my depth leaves much to be desired - back then, as a very young beginner, such a deep sound consisted only of opening the mouth and a breath of air - you could hear that way as good as nothing. I was dismissed with the remark that my vocal talent was a bit too poor after all.
When I said goodbye - annihilated - I thought I read in everyone's eyes the deepest regret that the five beautiful free tickets had been wasted on someone so unworthy.
The story of the "Bajazzo" had spread like wildfire, ashamed I crept through the streets, and in every glance of the passers-by I felt a huge portion of mockery resting on me. 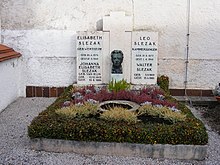 Grave of Leo Slezak and his wife Elisabeth with the verse “From the first kiss to death / Just tell yourself about love!” By Oskar von Redwitz

Leo Slezak lived mainly in Vienna , from May 1938 in Berlin , during vacation periods from 1911 in an old farmhouse in Rottach-Egern , where he was also friends with Georg Hirth and the writers Ludwig Thoma and Ludwig Ganghofer . In Vienna he was a member of a Masonic lodge . He spent the last years of his life in Rottach-Egern, where he is buried next to his wife Elisabeth in the cemetery of the Church of St. Laurentius (Egern) .

His children Walter and Margarete Slezak also opted for the stage career. Walter became a well-known movie star in Hollywood. When he appeared in anti-Nazi films during the Second World War, Slezak was banned from filming in the Greater German Reich in 1943.

In 1908 he was given honorary citizenship by the municipality of Brixlegg after he gave a benefit concert for the flood victims and made the enormous proceeds available.

In 1960 the Leo-Slezak-Gasse in Vienna- Währing (18th district) and in 1977 the Leo-Slezak-Straße in the Berlin-Neukölln high-deck housing estate were named after him. In Munich district Obermenzing there is also a Slezakstraße.

Leo Slezak wrote several books in which he describes his eventful life in a humorous way: