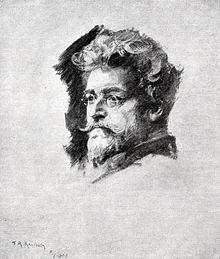 Ludwig Albert Ganghofer (born July 7, 1855 in Kaufbeuren ; † July 24, 1920 in Tegernsee ) was a Bavarian writer who became famous for his homeland novels .

Ludwig Ganghofer's birthplace in Kaufbeuren is in the center of the old town, right next to the Martinskirche , where he was baptized. As the son of a forester with changing positions, he grew up in various Bavarian towns. Ludwig Ganghofer spent part of his childhood (1859–1865) in Welden near Augsburg. After graduating from the Royal Bavarian High School in Regensburg in 1873 , he worked for a year as a locksmith and fitter in the Riedinger machine factory in Augsburg . In 1875 he began studying mechanical engineering at the Polytechnic in Munich , but later switched to literary history and philosophy in Munich, Berlin and Leipzig . During his studies he became a member of the Berlin Academic Literature Association . In 1879 he received his doctorate in Leipzig . In 1913, as an old man , he became a member of the newly founded fraternity Rheno-Marchia Münster .

Ganghofer wrote his first play Der Herrgottschnitzer von Ammergau in 1880 for the Munich Gärtnerplatztheater . It was performed there nineteen times. The piece has been played more than a hundred times in Berlin. From October 1881 Ganghofer worked in Vienna as a dramaturge at the Ringtheater , which burned down a few weeks later . Since then he has worked as a freelancer for the family paper Die Gartenlaube and features editor of the Neue Wiener Tagblatt (1886–1891). During his time in Vienna, Ganghofer frequented the famous salon of Baroness Sophie Todesco , wife of the businessman Baron Eduard Todesco in the Palais Todesco on Kärntner Strasse. There he met important representatives of art, culture and economy, as Isidor Mautner , Hugo von Hofmannsthal and Strauss , who gave him the polka on to the Dance , Op. 436 dedicated while Ganghofer turn parts of the libretto for Strauss operetta The Gypsy Baron wrote and dedicated his novel Der Unfried to Strauss. In 1890 Ganghofer published the collected works of Johann Nestroy together with the writer and journalist Vinzenz Chiavacci, who had been friends with him throughout his life .

Ganghofer had his breakthrough as a writer with highland stories and novels - the first in 1883 with the prose version of the hitherto unsuccessful stage play Der Jäger von Fall . From 1891 he focused on writing, but staged Hugo von Hofmannsthal's The Gate and Death in Munich in 1898, for example .

Ganghofer's grave in the Egerner cemetery

Ganghofer was interested in many things. He was particularly interested in technical innovations, such as the film most recently . In 1897 he founded, together with Ernst von Wolzogen , Max Halbe and Richard Strauss , the Munich Literary Society , and sat as their president to press for authors who represented a different kind of literature and no recognition had found or under the censorship to suffer had (For example Rainer Maria Rilke or Frank Wedekind , for whom Ganghofer also gave the funeral speech in 1918). With Frank Wedekind and Heinrich Mann he signed the call for democratization for the Prussian electoral reform in 1909 . His engaging, humorous manner brought him into contact with numerous public figures. Ganghofer ran a hospitable house with his family.

Both in Munich and on his spacious hunting lodge "Hubertus" near Leutasch in Tyrol (right next to today's Tillfußalm), where he and some co-tenants had leased a hunting area of ​​over 20,000 hectares in the Gaistal , were well-known personalities of the time from the most diverse Areas of his guests, such as Ludwig Thoma , Friedrich August von Kaulbach , Franz von Stuck , Franz von Defregger , Rainer Maria Rilke, Paul Heyse , Hugo von Hofmannsthal, Franz von Jauner , Leo Slezak or Richard Strauss . Adele Sandrock and Karl Valentin were discovered and promoted by Ludwig Ganghofer.

Between 1915 and 1917, Ganghofer reported as war correspondent from theaters of war on the western and eastern front , directly from the front line. In addition to propagandistic war reports, such as Journey to the German Front , there is also a large number of war poems that appeared in anthologies such as Eiserne Zither and Neue Kriegslieder . The works are characterized by patriotic sentiments and often hymns of praise for the warfare under Paul von Hindenburg and the emperor , who was a personal friend of Ganghofer (Ganghofer was considered the emperor's favorite writer). A deep disposition and friendship connected him with the Styrian homeland poet Peter Rosegger . Ganghofer suffered a serious war wound and was awarded the Iron Cross . Like his friend Ludwig Thoma, he became a member of the nationalist German Fatherland Party , founded in 1917 , which propagated a victory peace . After its dissolution on December 10, 1918, Ganghofer no longer appeared politically.

After finishing his work as a war correspondent, he worked as a writer until his death. His last work, The Land of Bavaria in Color Photography , he dedicated to King Ludwig III. of Bavaria . Ganghofer died in 1920 at his last residence, the Villa Maria in Tegernsee, which he bought in 1918, converted and lived in from 1919. His grave is in the cemetery of the St. Laurentius Church in Rottach-Egern , next to that of Ludwig Thoma .

Many of Ganghofer's works take up events from the history of the Berchtesgadener Land , where he regularly stayed. His homeland novels earned Ganghofer the reputation of the "ideal world" writer during his lifetime. Not infrequently his works, which mostly deal with the life of simple, capable, honest people , have been described as kitsch . Ganghofer and his works were therefore the target of satirical attacks during their lifetime, for example by Karl Kraus in his work The Last Days of Mankind .

The historical novels about Berchtesgaden's chronicle in particular contain references to social conflict situations during the Wilhelmine era . These stories, which do not always have a happy end, also deal with conflicts between the classes as well as social advancement (through loyal service) and advocate simple trust in God . Militarization can be observed within this cycle , and armed conflicts are described more and more. Ganghofer describes the social situation of the farmers as well as the clash of progress and superstition . Above all stands the ideal of a monarchist-patriarchal state caring for its subjects, as it corresponds to the Prussian- conservative ideology. In this chronicle the unity of the countries and classes is evoked, Ganghofer portrays inner strife and disintegration negatively. The Christianity as Ganghofer is there in this work, characterized the German nation state sgedanken accordingly by a rather Protestant coloring from. On the other hand, the stories are largely free of ethnic ideology, which is evident both in the description of the rural characters and in the fact that in Ganghofer - unlike in ethnic literature - dark-haired fictional characters with southern roots (as well as their connections with Germans) are often positive are occupied. Even Jewish characters are not portrayed negatively in an anti-Semitic way, and injustice they have suffered is also discussed. In the résumé of an optimist ("Book of Childhood", Chapter 3) Ganghofer writes:

“I was a journalist in Vienna for ten years. That's where you get to know Jews. Many many. And I have found that in Jewish families all the importance of the Incarnation in front of the children are taken and discussed in a much more natural and sensible way than the crippled morality of our 'Christian- Aryan culture' allows. The Jewish fathers and mothers enjoy the fruit of the rational in the deeper love of their children. "

Ganghofer's works, especially the novels, are still published today. More than 30 million issues were sold worldwide (estimated as of 2004).

Ganghofer's parents were the Ministerialrat August Ganghofer (later head of the Royal Bavarian Forest Administration, who was awarded the non-hereditary title of knight in 1887 ) and his wife Charlotte, née Louis, daughter of Professor Carl Louis , who taught at the Aschaffenburg Forestry School. Ganghofer's sister Ida was married to the geologist and geographer Albrecht Penck . The geomorphologist Walther Penck was Ganghofer's nephew. The writer Bernhard Horstmann , who wrote detective novels and thrillers under the pseudonym Stefan Murr , and the publicist Caspar Freiherr von Schrenck-Notzing are known among Ganghofer's grandchildren .

The Jewish origin of Ludwig Ganghofer's wife, Kathinka geb. Angel is controversial. Even before the Nazi era , an "Aryan" aristocratic origin was claimed, allegedly the illegitimate daughter of the Austrian diplomat Count Ferdinand Ladislaus von Esterházy- Hallwyl and the operetta singer Marie Geistinger . She was raised by a Jewish family in Budapest. However, the sources are different: Katharina Engel's birth was entered as Gitel Engel on July 7, 1856 in the birth register of the Israelite religious community in Pest , according to which she was a daughter of Leopold Engel and Babette Weiss. Her parents are said to be the businessman Leopold Engel, who died in Vienna in 1877, and his wife Babetta "Betti", née. Weiss, who also died in Vienna in 1870. Both are buried in the Jewish cemetery in Währing . In Leopold Engels' succession file, there is no mention of a word that she was an adopted or foster daughter. The alleged origin and subsequent adoption by the Jewish couple Engel appears to be questionable because before 1868 it was impossible in Austria to convert from Catholicism to Judaism . In any case, Kathinka Engel resigned from the Jewish faith in 1882 and converted to the Roman Catholic faith. She and Ludwig Ganghofer married on May 7, 1882 in the Augustinerkirche in Vienna.

Kathinka's older sister, Bertha Engel, married to the civil servant Samuel Fried, was the mother of Alfred Hermann Fried , who received the Nobel Peace Prize in 1911 . Her brother Moritz Engel was the owner of the important Viennese tabloid and cultural magazine Wiener Salonblatt, founded by Viktor Silberer .

Friedrich August von Kaulbach made numerous portraits of Ganghofer, his daughters and a granddaughter. Another portrait of Ganghofer and the ex-libris he used was made by Franz von Stuck . Franz von Defregger , his best man, painted the picture "Ganghofer among his hunters".

In his birthplace Kaufbeuren , the Stadtmuseum Kaufbeuren , which owns large parts of Ganghofer's estate, has a separate room in the permanent exhibition dedicated to the writer. There is also a Ganghofer Museum in Leutasch .

In July 1925 , a memorial designed by Hans Grässel was unveiled in the Berchtesgaden spa gardens in honor of Ganghofer by the Cologne university professor Friedrich von der Leyen . In Rottach-Egern , the sculptor Quirin Roth a . a. a life-size bronze sculpture created by Ludwig Ganghofer.

Every year at the beginning of March, the International Ganghofer Run takes place in the Leutasch Valley in Tyrol . Over 1000 athletes from all over the world take part in this open cross-country skiing competition for all ages and levels of ability.

In addition, numerous streets (e.g. in Bad Reichenhall , Berchtesgaden , Nuremberg and Stuttgart ) and the Ganghofer Bridge in Munich were named after him.

Ganghofer is one of the most filmed German authors. Some of Ganghofer's novels were filmed as silent films in the 1910s and 1920s. Numerous homeland films from the 1950s - in the wake of the cinema miracle - are film adaptations of his novels. The last major Ganghofer films to date were made in the 1970s ( Hubertus Castle , Der Jäger von Fall , Waldrausch ).