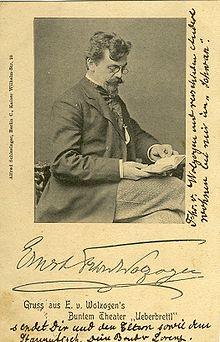 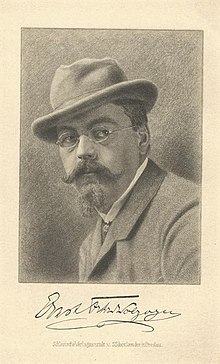 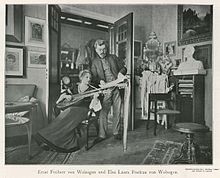 Ernst von Wolzüge and his wife Elsa Laura in their Berlin apartment, 1905. Photo by Zander & Labisch .

Ernst Freiherr von Wolzog (born April 23, 1855 in Breslau ; † July 30, 1934 in Puppling near Wolfratshausen ) was a writer , editor and founder of one of the first literary cabarets in Germany.

Ernst von Wolhaben came from the Lower Austrian nobility and was raised by an English governess . He studied German literature, philosophy and art history in Strasbourg and Leipzig . Afterwards he was a reader of the Grand Duke of Saxony-Weimar-Eisenach . In 1882 he moved to Berlin , where he first became a publisher's editor and then a freelance writer . In 1891/92 he was with Martin Greif and Hermann Heiberg on the board of the Association for Book Lovers.

From 1892 to 1899 he lived in Munich , where he founded the Free Literary Society and also came into contact with Sophia Goudstikker . His novel The Third Sex deals with the phenomenon of this woman and her friends. Then he returned to Berlin and started the first German cabaret with the Überbrettl (the term was evidently intended as an ironic allusion to Friedrich Nietzsche's concept of the "Übermenschen"). That earned him the name "Brettl-Baron". He had to end his cabaret project in 1902 due to economic difficulties, and in 1905 he moved to Darmstadt . After another attempt to found a theater in Berlin, he finally went to Bavaria in 1918 and settled in Puppling near Wolfratshausen .

As an opponent of the Weimar Republic , he wrote anti-democratic cabaret verses as early as 1921. In November 1932 he published an election call for Hitler in the Völkischer Beobachter , in which Hitler was described as " the candidate of the German intellectual world ".

He had been married to the singer Elsa Laura von Wolehmen since 1902 .

As a writer, Wolhaben mainly wrote socially critical novels; his autobiography How I Killed Myself is not only strongly conservative in color, but also clearly anti-Semitic .

In the Soviet occupation zone his writings Mein Vortragsbuch (1922) and How I Killed Myself (1923) and in the German Democratic Republic When the Old Towers Fall (1925) were placed on the list of literature to be discarded.