Theodor Lessing in a recording by Will Burgdorf

Karl Theodor Richard Lessing (born February 8, 1872 in Hanover ; † August 31, 1933 in Marienbad , Czechoslovakia ) was a German philosopher , writer and publicist . The author, shot by three assassins in Czechoslovakia, is one of the first known victims of National Socialism .

Lessing was born as the son of an assimilated Jewish couple from the upper middle class. The father was a doctor in Hanover, the mother a banker's daughter.

“Hanover, Georgsplatz with Lyceum”, Lessing's school building under the direction of Carl Capelle ;
Postcard No. 2443 , Zedler & Vogel , around 1900

He described the experiences at home and at school as his two “hells” and reacted by withdrawing; he refused to meet the requirements and was regarded as a moderate student or as "unable to attend school". In his memoirs he wrote about his high school days:

“This humanistic German grammar school with patriotism, Latin and Greek in the main subjects ..., this human dumming institute, half based on official competition and striving, half on a mendacious, German stupid phrasing, was not only extremely unscrupulous - it was above all boring ... Nothing, nothing could ever make up for what these fifteen years of life have destroyed in me. Even today I dream almost every night of the torture of my school days. "

After he had to leave the Ratsgymnasium Hannover prematurely on the advice of the director Carl Capelle , he passed his Abitur in 1892 at the Städtisches Gymnasium Hameln . In contrast to what he himself portrayed and which Rainer Marwedel (1987, p. 28) adopted, Lessing was not in training at the Israelite Horticultural School in Ahlem . According to his own admission, he owed the successful completion of the Abitur to his teacher Max Schneidewin : "It happened for the first time that I met a person who did not want to master me as a teacher, which immediately raised resistance ..."

Lessing had a childhood friendship with Ludwig Klages , which he ended in 1899; To what extent Klages' anti-Semitism was the reason for this has not been definitively clarified. Both later emphasized that their youth together had shaped their future ideological thinking. The educational reform became a lifelong topic for Lessing.

After graduating from high school, he began to study medicine in Freiburg im Breisgau , Bonn and finally in Munich , where he switched to literature, philosophy and psychology in accordance with the inclinations that he had already shown as a schoolboy. He completed his studies in philosophy with a dissertation on the Russian logician Afrikan Spir . Lessing was friends with the painter Ernst Oppler , who went to Berlin in 1905. Together they regretted the mediocrity of their hometown in many ways.

A planned habilitation at the University of Dresden failed because of the resistance that was met with Jews , socialists and the public advocate of feminism there.

He spent the following years without a permanent job as a substitute teacher, including with Hermann Lietz , and as a lecturer. Among other things, he gave introductions to modern philosophy in the waiting hall of Dresden Central Station. In 1906 Lessing went to Göttingen to write a habilitation thesis with Edmund Husserl . The plan failed. In 1906/07 he worked as a theater critic for the Göttinger Zeitung ; the texts are also available as a book under the title Nachtkritiken .

Lessing between 1925 and 1930 on a photograph by Nicola Perscheid

In 1907 he returned to Hanover, where he became a private lecturer in philosophy at the Technical University .

With an extremely sharp satire , Lessing attacked the critic Samuel Lublinski and also started from his unappealing figure. He described Lublinski as a "fat synagogue" and escapist babbler and triggered a literary scandal. Authors such as Theodor Heuss , Stefan Zweig and others from Lublinski's Weimar region signed a declaration that, unfortunately, there is no court of honor for journalists. Thomas Mann refused to sign, because he wanted to "drive the insolent dwarf" in a different way, "due to the mouth", and responded with the polemical essay The Doctor Lessing . The critic he sided with was one of the first to recognize the literary importance of the Buddenbrooks . In his work he accused Lessing of wanting to discredit Lublinski and of drawing a slanderous caricature. The argument reveals anti-Semitic clichés in both Lessing and Thomas Mann .

With his medical knowledge from his student days, Lessing volunteered for military medical service at the beginning of the First World War in order to avoid combat deployment at the front. During this time he served as a hospital doctor and worked as a teacher. On the side he wrote the story as giving meaning to the meaningless . The publication of this book was prevented by the military censorship during the war , as Lessing took a clear position against the war. It wasn't published until 1919.

Former home of Ada and Theodor Lessing in Hanover- Anderten

After the war, Lessing returned to his lecturer post in Hanover back and built in Linden since 1919 the local community college Hannover-Linden with his second wife Ada Lessing on. In addition, from 1923 he developed an extensive journalistic activity. He published articles, essays , glosses and features , especially in the two republican-democratic daily newspapers Prager Tagblatt and Dortmunder Generalanzeiger , and thus became one of the best-known political writers of the Weimar Republic .

His report on the trial of serial killer Fritz Haarmann , whom he followed as an eyewitness, attracted attention in 1925 . He made the dubious role of the Hanoverian police (Haarmann was a police spy) public in this case. He was then expelled from the trial.

In the same year he wrote a character study about the candidate for the office of Reich President and later winner of the presidential election Paul von Hindenburg , in which he warned against the election of this man. He described Hindenburg himself as a staid, intellectually undemanding personality, but behind whom he saw dangerous political forces at work:

“According to Plato , the philosophers should be leaders of the people. A philosopher would not take the throne chair with Hindenburg. Just a representative symbol, a question mark, a zero . One can say: better a zero than a nero . Unfortunately history shows that a future Nero is always hidden behind a Zero. "

Quotation from the letter of the Reich Ministry for Science, Education and National Education (REM) of April 20, 1933 to the TU Hannover

This article brought him hateful opposition from German national and ethnic circles. Students formed a committee against Lessing. It called for a boycott of its lectures, the withdrawal of the venia legendi and the removal from the university, and students violently disrupted its lectures. Anti-Semitic motivation became apparent during the protests . Lessing received little support from the public and especially from the university environment, and professor colleagues showed solidarity with the demands of his opponents, especially when on June 7, 1926 around a thousand students threatened to emigrate to the TU Braunschweig . When the situation did not calm down despite Lessing's leave of absence in the 1925/26 winter semester, he agreed with the Prussian minister of education, Carl Heinrich Becker, on June 18, 1926, to cease teaching and to take an indefinite leave of absence with reduced earnings.

After the “ seizure of power ” by the National Socialists , Lessing took part in the “ Das Freie Wort ” congress in Berlin on February 19, 1933 , and fled to Czechoslovakia with his wife Ada on March 1, where he settled in the Marienbad spa ( Mariánské Lázně ). From here he continued his journalistic activities in German-language foreign newspapers. On April 20, 1933, his teaching and research assignment was withdrawn with immediate effect due to the Law on Civil Servants.

In June 1933 some Sudeten German newspapers in Czechoslovakia spread that a reward had been offered in Germany for those who kidnapped Lessing and handed over to the German authorities. On August 30, 1933, the National Socialist assassins Rudolf Max Eckert, Rudolf Zischka and Karl Hönl shot Lessing through the window of his study and seriously wounded him. The following day, at the age of 61, he succumbed to his injuries in the Marienbad hospital and was buried on September 2, 1933 without public attention in the Jewish cemetery in Marienbad. Rabbi Jakob Diamant announced that the Jewish community of Marienbad would set up a refugee home in his honor, but that did not happen. Lessing is considered to be the first person to be killed by National Socialism on Czech soil. The assassins escaped to Germany and were given new identities by the SA. Eckert returned to Marienbad in 1941, was recognized there in 1945 and sentenced to 18 years in prison in 1946. In 1959 he was deported to the Federal Republic. Zischka lived undisturbed in the GDR until his death in 1978.

Lessing's grave was devastated during the November pogroms in 1938 , and his gravestone was only erected again after the Second World War . 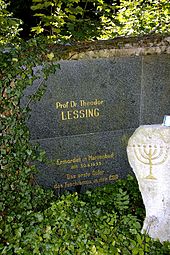 Lessing's philosophy - like that of Oswald Spengler or Ludwig Klages - is attributed to the tradition of philosophical pessimism and the metaphysics of will , which goes back to Arthur Schopenhauer . Like Schopenhauer, Lessing dealt with the basic human experience of hardship and suffering , but did not react to it with a retreat into the private sphere or with aversion to the world, but with a philosophy of action .

This was expressed in a critical examination of the phenomena of public life in his time. Looking back, he wrote: “As a limit of my nature, my inability to 'let five be straight' became fatal to me. I always wanted to correct, educate, make understandable, ethically evaluate down to the last detail. Face-to-face there was hardly ever any misunderstanding. But as soon as I naively let myself go as a writer, the devil broke loose. ”A special topic due to this commitment was an axiomatic ethics of values . Unlike Max Scheler or Nicolai Hartmann , Lessing denied the existence of absolute values. His leitmotif was “Reduce the pain. This is the only possible imperative of moral action. "

He criticized Friedrich Nietzsche's historicism and relativism, even if he shared his critical view of historiography. In contrast to natural science, he characterized historiography as “willenschaft”. In the science of history, reality is only constructed. “It is always (in the natural sciences and in history) a matter of binding and rhythmicizing 'life' by virtue of thought. This forms symbols of calculable, limited, harmonious, measurable 'reality' from what is inherently immeasurable and inaccessible-incomprehensible. Both realities fictional! both transcendent in relation to what is immediately given. And one is neither truer nor more real than the other. "

Similar to Schopenhauer, Eastern thinking played an essential role in Lessing's formulation of his cultural criticism . Christianity and Buddhism have created a culture that is hostile to life. "Culture is that process, thanks to which a part of being (the brahma), namely the spirit (buddhi, the awakened) poses itself to be the ruler and the savior of life."

In 1958, a memorial plaque was unveiled at Lessing's Marienbad residence.

In November 2005, the AStA of the University of Hanover proposed the renaming to “Theodor Lessing University”, which the students rejected in a ballot in January 2006 (34.2% of the votes). The AStA of the university, later named after Gottfried Wilhelm Leibniz , has its seat in the Theodor-Lessing-Haus . On September 7, 2006, the Hanover Adult Education Center was named “ Ada and Theodor Lessing Adult Education Center ”.

On October 6, 2011, a stumbling block was laid in front of the former home of Ada and Theodor Lessing in the Anderten district of Hanover in the street Am Tiergarten . On August 30, 2013, the Hameln Library Society unveiled an information and memorial plaque on the 80th anniversary of Theodor Lessing's murder. It is in Lüders-Park, on the property on which Lessing lived in 1891/92 until he graduated from high school.

The German-Israeli Society in Hanover has been awarding the Theodor Lessing Prize for enlightened thinking and action since 2003 . Previous winners are:

Selected volumes after 1945: by year of publication:

Aspects of the work