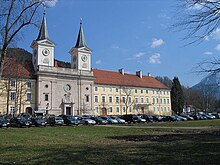 Tegernsee is a town in the Upper Bavarian district of Miesbach, directly on the Tegernsee .

The city is located in the Tegernsee valley, on the eastern bank of the Tegernsee in the Oberland and on the northern edge of the Alps . The entire lake including the only island ( Ringseeinsel ) is part of the urban area. Around four kilometers east of the city center, on the municipal border with Rottach-Egern, lies the 1448 meter high Baumgartenschneid .

The Alpbach in the center of the village

The Alpbach flows through the city center . The municipal boundary between Tegernsee and Rottach-Egern runs partly along the Rottach .

There is only the officially named municipality of Tegernsee.

The climatic health resort is located on the northern edge of the Alps and is assigned to the climate type high mountain climate, lower level.

Tegernsee Monastery on the copper engraving by Michael Wening

Around the middle of the 8th century - legend has it in 746 - the brothers Adalbert and Ottokar founded the Tegernsee Monastery , which was run by Benedictine monks until secularization in 1803. The place developed from the settlement of ministerials and monastic agriculture . In the course of secularization, the small parish church (for the rural population) that was located next to the monastery was demolished; in it was the so-called Hammerthal Madonna , which is now in the Heilig-Geist-Kirche in Munich . The place only really took off in the 19th century when the former monastery was acquired by King Maximilian I Joseph and used as a castle. A place for spa stays and summer retreats developed which , like the whole of Tegernsee, increasingly attracted artists at the turn of the 20th century. In the time of National Socialism , the Tegernsee valley was particularly popular with high-ranking officials and so some National Socialists settled in Tegernsee and the surrounding communities.

In 1922, Tegernsee was the venue for the Bavarian Ski Championship.

At the end of the Second World War , the municipality's hotels were used as auxiliary hospitals . Around 12,000 wounded and civilian war refugees were housed in Tegernsee alone. Troops of the 17th SS Panzer Grenadier Division "Götz von Berlichingen" involved in retreat battles were persuaded by the convalescent Major Hannibal von Lüttichau not to settle in the village, but to withdraw via Kreuth towards Austria. He then went to the advancing artillerymen of the US Army with a white flag and was able to convince them of the withdrawal of the Waffen SS so that the place and the residents and refugees were not shot at.

On May 15, 1954, the city ​​was raised by the Bavarian State Ministry of the Interior . The certificate was presented to Mayor Dennler by Prime Minister Hoegner .

The past local elections resulted in the following allocation of seats in the city ​​council :

The city has been twinning with Dürnstein in Lower Austria since 2006 . In addition, in 2015 a partnership with the in was South Tyrol situated Caldaro closed. 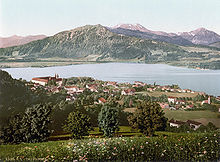 Tegernsee on a photochrome from 1900

Town hall Tegernsee with jetty in the center

The main attraction is the former Tegernsee monastery , which played an important role in the cultivation of Upper Bavaria in the Middle Ages . The monastery church of St. Quirin , which dates from the Middle Ages, was redesigned in the baroque period. After secularization , the monastery was used as a royal castle, the monastery church as the local parish church. The castle is still owned by the Wittelsbach family and today houses the state high school Tegernsee, a brewery , the restaurant “Herzogliches Bräustüberl Tegernsee” and the restaurant “Schlossbrennerei Tegernsee”. The local history museum "Museum Tegernseer Tal" is located in the former rectory of the monastery.

Other historically significant buildings are the Sengerschloss (now part of the Hotel “Das Tegernsee”), the Ganghofer House, the Stielerhaus , the Palais Wedelstaedt and the Villa Arco, the later Seeheim sanatorium (now part of the Orthopedic Clinic), the Lord's summer house Acton . The last four buildings mentioned are located on the summit of the Leeberg, the so-called literary hill.

The area around the palace was designed in the form of a landscape garden from 1820 by the important garden artist Friedrich Ludwig von Sckell . From 1872 this palace garden was supplemented by a few carpet beds designed by the garden artist Carl von Effner . Despite some impairments from overbuilding and the use of parking spaces in some areas, the main features of the facility are still preserved today and are one of the most important garden plans in the Bavarian Alpine foreland.

The TV Tegernsee chess club , which played in the 1st Bundesliga until 2009, is of supraregional importance .

The monte mare lake sauna was opened in August 2008 . The lido is next door.

The focus of the economy is in the tourism sector. The number of hotel beds has been falling continuously at least since the turn of the millennium. In 2013 there were 1,349 beds, a decrease of 20% within ten years. This increases the tendency towards day tourism.

The town's largest employer is the Tegernsee Orthopedic Clinic of the Deutsche Rentenversicherung Bayern Süd . The clinic contributes around a third to the number of overnight stays at Tegernsee. The Duke's Bavarian Tegernsee Brewery is also housed in the former monastery .

Due to the valley location and the high volume of traffic due to a shift to day tourism, there is an unfavorable traffic situation.

The city of Tegernsee is located on the B 307 from Gmund am Tegernsee to the Sylvenstein reservoir . It is located around 20 km south of Holzkirchen and the federal highway 8 , 53 km from the state capital Munich , 18 km from Bad Tölz , 15 km from Miesbach , 44 km from Rosenheim and 34 km from Achenkirch am Achensee . Regular buses go to the neighboring communities of Gmund, Bad Wiessee, Rottach-Egern and Kreuth (Tegernsee ring line), to the Weißach Valley and on to the Austrian Achensee and the touristically important Valepp . The use of the public RVO buses in the valley is free of charge for spa card holders, which aims to relieve traffic.

Tegernsee is also the terminus of the Tegernsee-Bahn , which is now served by the Bayerische Oberlandbahn every hour from Munich Central Station . She drives more frequently in commuter and excursion traffic.

In the summer half-year, the lakeside residents can be reached by regular boat connections from the Bavarian Sea Shipping Company across the lake. The approximately 170 meter long boat trip with the “Überführer” from the narrowest part of the Egener Bay at the Hotel Seehotel Überfahrt in Rottach-Egern to the Tegernsee peninsula Point and back continues a ferry tradition that goes back over 500 years.

People who worked or lived in the city

Municipalities in the Miesbach district