Peter Rosegger (actually Roßegger ; born July 31, 1843 in Alpl , Styria , Austrian Empire ; † June 26, 1918 in Krieglach , Austria-Hungary ) was an Austrian writer and poet . He changed the spelling of his name Roßegger to Rosegger when his first publications appeared, as there were five Peter Roßegger in his home region, some of whom were not related to him and with whom he did not want to be confused. Until about 1893 he published under the name PK Rosegger, after which he seems to have preferred the nickname Peter . At one point he also used the pseudonym Hans Malser .

Peter Rosegger was born at Kluppeneggerhof in Alpl as the eldest of seven children of forest farmer Lorenz Roßegger and his wife Maria. Since there was no compulsory schooling in Alpl, there were many illiterate people . His father was illiterate too, so the boy learned a lot from his mother. He only received limited schooling. A teacher who had been expelled from school by the conservative pastor because of his sympathy for the March Revolution was taken in by the poor peasants and taught some peasant children, including Peter Rosegger.

The parents wanted the son to be a pastor, but the study seemed too expensive. Because he was physically too weak to become a farmer, he began his apprenticeship at the age of 17 with a hiking tailor in Sankt Kathrein am Hauenstein . He went from farm to farm on his sturgeon and got to know people and customs. Jakob Eduard Schmölzer encouraged the young Rosegger to write down especially the folk songs that he heard. Many of the orally transmitted songs and stories have been preserved to this day. As a sturgeon cutter's apprentice, Rosegger only had a small income, with which he began to buy books, initially mainly village stories. Soon after, he began to write himself.

Rosegger's sponsor, named Schmiedhofer, persuaded the young apprentice tailor to entrust his literary attempts to an editor and was ready to bring the volumes Rosegger had written to Graz himself . The editor of the Grazer Tagespost , Adalbert Svoboda, recognized his talent as a writer and, as a result, placed him at the Graz Academy for Trade and Industry . From him came the designation nature poet , against which Rosegger fought all his life. He was supported by the industrialist Johann Peter Reininghaus , who ran one of the largest breweries in Austria in Graz-Reininghaus .

In 1865 Rosegger moved to Graz, to his first apartment on Wickenburggasse, and attended school as a guest student with 15-year-olds for four and a half years. He also worked as a librarian and completed various assistant services. In 1869 Rosegger published his stories and left the academy. He then attended several lectures in philosophy and German at the Karl-Franzens University in Graz . A three-year scholarship approved by the Styrian regional committee enabled him to stay in Germany , the Netherlands , Switzerland and Italy . On an educational trip in the summer of 1872 via Bologna , Florence and Rome to Naples , he visited the ancient excavations of Pompeii , Renaissance art .

Portrait in the gazebo from 1888

On May 13, 1873, he married Anna Pichler, the daughter of a Graz hat manufacturer, in the Mariagrüner Church in Graz. On February 20, 1874, their son Josef was born to the couple and their daughter Anna was born on March 4, 1875. His wife died on March 16, 1875. At this time Rosegger was already known as a writer.

In 1874, after inquiring in advance from the then Minister for Education and Culture, Karl von Stremayr, he received several grants that helped overcome initial difficulties. In addition, the minister was able to be won over as “protector and sponsor of the elementary school” to dedicate the novel Die Schriften des Waldschulmeisters (1875).

In 1876 he was offered the publication of his writings by the publisher Gustav Heckenast from Pest . Rosegger accepted the offer - since then his publications have been published by Heckenast (nine in all). In 1876 Rosegger founded the popular monthly Roseggers Heimgarten in Graz , a magazine for the German house (which was continued after his death by Josef Friedrich Perkonig , among others ).

House where he lived and died in Krieglach

In 1877 Rosegger was able to fulfill his dream of a "home in the forest". After the first financially successful years as a writer, the house in Krieglach was built according to his own designs , and he and his children moved in by autumn. This house is now a museum.

Since 1878 Rosegger undertook reading tours which he a. a. led to Dresden , Leipzig , Weimar , Berlin , Hamburg , Kassel , Karlsruhe and Munich . In the presentation My reading trips , he reports on his experiences during this time.

After Heckenast died, his Adolf Hartleben from Vienna became his new publisher. The novel Der Gottsucher , one of Rosegger's most important works , was published there in 1883 . This work deals with an incident from the year 1493 in Tragöß , in which an unpopular priest was murdered by members of his own parishioners. The book was extremely popular; 13 years after publication, the 24th edition was published and in 1926 the 76th edition.

Due to differences in fee issues and editing problems, Rosegger accepted the offer from the Leipzig publisher Ludwig Staackmann . When working with Staackmann, a very personal and good relationship developed. After Staackmann's death, Rosegger maintained good contact with his son.

His tomb is in the cemetery in Krieglach. He himself wanted

“Just a simple grave, like every Alpler farmer. A wooden cross with the name on it. If after 50 years you still know who that is, then this is enough; if not, give him his peace. "

During the time of the First World War, Rosegger wrote many nationalist and war-friendly poems and texts. On November 19, 1914, he published a call to subscribe for war bonds in the Neue Wiener Tagblatt . Rosegger was a regular author of the Carnic-Julian War Newspaper, where he published texts and poems with German-national content. In 1916 he appeared in the volume of poetry, Styrian Weapons Blessing , written together with his friend Ottokar Kernstock , with nationalistic war poetry .

Rosegger also supported the German School Association , for example in 1909 with the appeal for donations “2,000 crowns times 1,000 are 2 million crowns”. For the poet's 100th birthday in 1943, selected parts of his work were used as Nazi propaganda . As a nationalist loyal to the monarchy, Rosegger saw himself connected to the Austrian emperor in a patriotic sense. He clearly distinguished himself from the German nationalists.

Critical thoughts of the Austro-Hungarian monarchy and the state administration can be seen in his novel Jacob the Last (1888). The authorities, the authorities and wealthy capitalists appear as enemies of the Styrian peasants, who represent the real rural population. The state robs the peasants of their livelihood through taxes and their sons through military legislation. They are not right to expect from him, it is always "master will over peasant law". The emperor is far from his people and inaccessible. Home is understood as the local farm and the closest neighborhood, not as home country . The “world poison” penetrates from the outside, which is later discussed in a novel of its own, and destroys them. Rosegger turns out to be a local poet in the narrowest possible sense, not a national poet or nationalist.

Rosegger criticized the supposedly dominant position of the Jews in economic and intellectual life and expressed a certain understanding of anti-Semitic currents , but condemned their appearance, as can be seen from a letter to his friend Friedrich v. Hausegger emerges: "Because anti-Semitism is now mainly represented by the uneducated, raw masses of large cities, because all of the finer-natured people feel chased back by this wild movement, I am very much afraid that it will cause great harm and that often makes me sad . […] Yes, such a movement has its natural causes, so it is justified, but it is neither enjoyable nor worth emulating. I deeply lament to live in such a time. "

According to the literary scholar Daniela Strigl , there are no anti-Semitic statements in Rosegger's novels and stories, but some stories contain positively drawn Jewish figures. Despite some anti-Semitic statements that can be explained by the zeitgeist, Rosegger never allowed himself to be captured by the ethnic-anti-Semitic movement. Strigl particularly opposes the related theses of the journalist Christa Zöchling . In a letter from 1889, Rosegger expressed the fear "that anti-Semitism will develop into a great system of horror and rape that will last for a long time and destroy many of our ideal goods." The German national press accused Rosegger of that he was unwilling to "place the racial standpoint above the general human", because of his occasional publications in the (Jewish) Neue Wiener Tagblatt , the writer was publicly attacked as a "Jew servant". 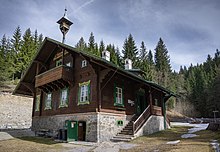 Rosegger was a practicing Catholic all his life , even though he was open to conversations with other Christians, noticed grievances in the church and commented on to others. The construction of the Evangelical Church of the Savior in Mürzzuschlag (1900), the Waldschulhaus in Alpl (1902) and the reconstruction of the Catholic Church in St. Kathrein (1902) go back to Rosegger's initiative .

In his Heimgarten magazine he published numerous articles on societal and social issues. He showed himself to be a proponent of a “ simple life ” and often took a viewpoint critical of civilization. Rosegger was very open to reform movements of his time, such as vegetarianism , alternative medicine and the abstinence movement . He also dealt with Buddhism and supported the idea of nature conservation that was just emerging at the time .

Ludwig Anzengruber , Ottokar Kernstock and Robert Hamerling were among his close circle of friends . He also had a deep friendship and ethos with the Bavarian writer Ludwig Ganghofer .

The Rosegger jacket was named after him.

Rosegger has received numerous high national and international awards, including:

Peter Rosegger was an honorary citizen of the city of Graz, the market town of Krieglach and the town of St. Kathrein am Hauenstein.

Rosegger's birthplace and the forest school in Alpl, as well as his house where he lived and died in Krieglach, are now museums dedicated to the folk writer. Both have been incorporated into the Universalmuseum Joanneum since 2013.

He was a member of the Schlaraffia and honorary member of the reading and speech hall for German students in Prague and the German reading hall at the Technical University of Vienna.

Streets in many places were named after Peter Rosegger, as was the Roseggerhaus , an alpine refuge in the Fischbacher Alps above Ratten (Styria) .

An asteroid that was discovered in 1991 at the Thuringian State Observatory Tautenburg was named after Peter Rosegger under the name (7583) Rosegger .