Serkowitz , until 1905 an independent rural community, is today a district and a district of the city of Radebeul in the district of Meißen in Saxony . Serkowitz is located on the southern outskirts directly on the Elbe , in the southeast it borders on Altkaditz , which belongs to Dresden . The center of Serkowitz is Altserkowitz with its listed objects. The district had in 1900 a size of 183 hectares.

Probably in the 12th century, Frankish colonists built a square alley village with later extensions to the west and north on the site of an Elbe ford (Serkowitzer Furt) and on the lower reaches of the Lößnitzbach (also called Zottelbach in Serkowitz ) . In 1315 the place was first mentioned as Cerakuicz . In 1327 it was called Cirakuiz , 1337 as Cirkuiz , 1528 as Sergkwitz , 1553 as Sorgkewitz , 1598 as Serckwitz and since the end of the 17th century Serkowitz (after this spelling was mentioned once in 1528). Although there is still no evidence of a Sorbian predecessor settlement , older interpretations lead the name back to cirkrica ( Old Sorbian for church ). More recent interpretations, however, consider the derivation of a proper name, for example that of the village founder, to be more likely.

The Serkowitz Vorwerk , mentioned in 1315, is no longer known from its former location. It was disbanded in the middle of the 15th century. In 1337 the inn in Serkowitz and the water mill were mentioned .

Starting from the Elbfurt near Serkowitz, the Rennsteig ran in the Middle Ages as a flood-free bypass of the marshy Elbe lowlands on the northern edge of the Seewiesen along to the Rundling of the village of Radebeul and from there through the Junge Heide to Klotzsche , from where it is congruent with the salt road from the Schenkhübel to Bühlau went.

The Lößnitzbach runs in a straight line above the Serkowitz village center and partly above the surrounding level. There it formed the inlet to the Serkowitz Mill or Talmühle (Altserkowitz 13), which, as the oldest mill in the Loessnitz, probably stood as early as the 12th century and was mentioned in a document as early as 1337.

The village comprised 12 farms, later 15 farms, and from the 16th century cottagers were added. The community of hutung was owned by the old community, called the "Fifteen" after the 14 farms of their time and the Brauschenkgut.

Just outside Serkowitz, on the connecting road to Fürstenhain , is the Weiberstein (also Wettin-Denkstein or Wettin-Gedenkstein), a memorial stone for two peasant women who saved the life of a hunting party with Friedrich August the Just on October 18, 1784 .

As a result of this event, today's Meißner Straße was laid out as a new post and country road between Dresden and Meißen in 1788 and in 1789 the inn "Weißes Roß" was built on this new country road. Later, on Napoleon's orders, it was extended to the road by digging ditches and planting trees along the road .

Due to the changes in the rural community order of 1838 , the election of the first municipal council took place in 1839.

The Serkowitz municipal office was located on the upper floor of the Albertschlösschen from 1891 to 1902 . The local council met there from 1885 to 1900.

In 1905 Serkowitz was incorporated into Radebeul .

The Fontainenplatz in the Dr.-Schmincke-Allee with the group of figures of the four seasons is considered both as a monument conservation entity and as a work of landscape and garden design . One of these is the garden of the villa at Hoflößnitzstraße 4 , which is also listed , and where the retired horn player and composer Josef Rudolf Lewy-Hoffmann lived during the second half of the 19th century . On the neighboring property there is a small transformer station in the homeland security style , in the entrance niche of which there are two figural wooden columns by the sculptor Reinhold Langner .

The center of the Platzgasse village was the Altserkowitz site , where some farmhouses and buildings from former three-sided and four-sided courtyards are listed . On the northern corner of the village center, on the old road from Dresden via Kötzschenbroda by Meissen standing Gasthof Serkowitz , one of the five historic brewery taverns goods of Lößnitz . Not far away, in the direction of Kötzschenbroda, is the Weiberstein .

From the old village location in the direction of the Radebeul-Ost cemetery you will find the settlement houses of the so-called "Eisold houses" . 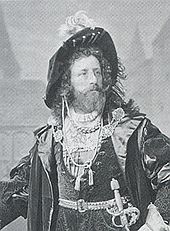 Moritz Ziller in historical costume, 1881
See also : List of personalities from the city of Radebeul

Serkowitz was strongly influenced in its development by the local builders . The best known are those in the entire Loessnitz acting brothers Ziller whose business office , also home of the elder brother Moritz Ziller , in the former main street 3, today Augustusweg 5, right after the municipal border with Oberlößnitz was. The younger brother Gustav Ziller lived in the neighboring house, Villa Gustav Ziller . While the Ziller brothers mainly built in Oberlößnitz and Niederlößnitz , many Serkowitz houses were owned by Friedrich Wilhelm Eisold and his construction company FW Eisold , which was later continued by his son Wilhelm Eisold . At the same time, brother Johannes Eisold ran a successful architecture and construction management office.

The statistician and social economist Ernst Engel spent the last part of his life in Serkowitz. He lived in a house designed by the Ziller brothers, but built by FW Eisold, near the narrow-gauge line of the Lößnitzgrundbahn . The painter Günter Schmitz also lived in a house in Serkowitz, at Villa Augustusweg 18 .

The entrepreneur Otto Baer sen. moved to Serkowitz in 1895 and took over a paint factory, which under him and subsequently under his son Otto Baer junior. grew steadily until the outbreak of World War II.