Wahnsdorf , an independent rural community until 1934, is today a district and a district of Radebeul in the district of Meißen in Saxony . The street village is located above the Elbe valley, on the Lößnitz plateau . It lies between the Moritzburg district of Boxdorf in the north and the Radebeul district of Oberlößnitz in the south; to the west it is bounded by the Lößnitzgrund and to the east by the Dresden district of Trachau . The district had in 1900 a size of 238 hectares.

The essence of Wahnsdorf is to this day that of a village with one and two-family houses of all kinds, while the districts of Radebeul in the Elbe Valley form a historic and increasingly exclusive villa suburb of Dresden . Because of its remote location, Wahnsdorf is the only district of Radebeul to have its own local council .

Wahnsdorf from a bird's eye view 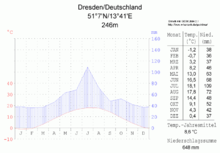 1350, the place was as Wahendorf first mentioned in 1378 as Waginsdorf and 1539 as Banßdorff . In 1570, today's Grundmühle was mentioned as a mill in the Grund under Wahnsdorf .

In the 14th century, Wahnsdorf belonged to the Burgraves of Dohna . In the 17th century Wahnsdorf went to the manor owners of Hermsdorf , who formed the manor until the feudal burdens were replaced in 1856. Among these was the Carlowitz family , who acquired Hermsdorf in the middle of the 15th century and provided the landlord for 125 years. In 1574, the chamberlain of the Saxon Elector August , Hans Harrer , acquired the Hermsdorf manor, but died in 1580 by suicide. In 1603, Elector Christian II acquired the manor. In 1657 Wahnsdorf came through the transfer of the manorial power from his nephew, Elector Johann Georg II. , To Electoral Court Marshal Johann Georg von Rechenberg . In 1699 the manor came to the Flemming family .

The election of the first municipal council took place in 1839 due to the changes in the Saxon rural municipality code of 1838 . In 1870 the Zillersche waterworks was built in Lößnitzgrund . The Wahnsdorf weather station was built in 1916 on the 246 m high Wahnsdorf hilltop by the head of the Royal Saxon State Weather Station , the meteorologist and inventor Paul Schreiber .

The urban area on the plateau is climatically separated from the location in the Elbe Valley. The climate diagram of the weather station Wahnsdorf shows the prevailing average temperatures and precipitation for the period 1961–1990.

Panoramic view of Radebeul from the "Pfeiffer" 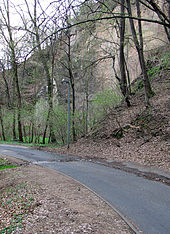 On the southern edge is a strip of the landscape protection area , which with its dry vineyard walls was placed under regional protection as a historical vineyard landscape in 1999 , including on Wahnsdorf. This area stretches from Oberlößnitz and Wahnsdorf in the east via Niederlößnitz and Naundorf to Zitzschewig.

The conservation- related entirety of the Bilz Sanatorium at Eduard-Bilz-Straße 53 extends to the east by the Mäuseturm as far as the Wahnsdorfer Flur. In the north, in particular, there are larger areas of the former Bilz recreation park on the Wahnsdorf area.

The Jägerberg estate , which is considered a work of landscape and garden design , also extends to the north as far as Wahnsdorfer Flur; so the sheet metal castle on the edge of the slope is located in this district. The property of the Villa Tautzschgenhof , which is itself a monument, also has ancillary facilities in the preservation order .

At Anger Altwahnsdorf there is the war memorial and the Albertstein , a stele-like stone monument with a bronze plaque for the Saxon King Albert , erected in 1903. At the Wahnsdorf weather station there is a triangulation pillar made of granite, which defines a triangulation point of the Saxon land survey in the 19th century . The inscription reads: “Station WAHNSDORF of the Kings. Saxon. Triangulation 1865. "

At the ends of the Angers there are two small monuments that are not included in the list of monuments: They are historical signposts made of sandstone. To the east of the Anger at the junction of Reichenberger Straße there is a sign to Reichenberg and Eisenberg and to Boxdorf and Wilschdorf . West of the Angers at the junction of the village ground from the Langenwiesenweg there is a sign to Niederlößnitz and Lindenau as well as to Buchholz and Dippelsdorf .

A few other architectural monuments are located in the Wahnsdorf area, for example the former power station in Lößnitzgrund with its connection to the Lößnitzgrundbahn, which has now been broken off . Above the Lößnitzgrund is the mountain inn "Zum Pfeiffer" and not far from it is the Todhübel , a ground monument .

From Wahnsdorf's formerly largest winery, Graue Presse , only the encircling walls , which are now listed, with the trumpet-shaped gate can be found at Graue-Presse-Weg 16 . The figures that used to stand on the gate pillars have disappeared, the wooden wine screw press of the same name that was formerly in the winery is now in the Hoflößnitz .

In Gurlitt's art monuments from Dresden's environs , published in 1904, goods No. 1 and No. 9 are listed in addition to the mountain inn “Zum Pfeiffer”, of which the figures on the gate pillars are described: At No. 1, two approximately 110 cm high female Figures made of sandstone (“maybe summer and winter”) and at No. 9 ( gray press ) two 63 cm high figures made of sandstone (Bacchus and an “old pensive man”). The figures have disappeared from their pedestals over time.

With the public transport Radebeul craze village is from the city center as well as Dresden from the VGM to reach -line 475, with a longer walk also by city bus from Dresden to station "Boxdorf, At the bottom" (line 80) via Dresden-Wilder Mann ( Tram line 3) or tram line 4 from the lower Radebeul. By car, however, Dresden city center can be reached within 20 minutes during the day.

The Dresden painter, draftsman, engraver and lithographer Christian Friedrich Gille (1805–1899) spent part of the year in Wahnsdorf from around 1880, where he died in 1899, last mentally deranged. The diplomat Joachim Naumann (1929–2019) was born in Wahnsdorf.