A small monument is a fixed, independent small structure, made by human hands from durable material. Small memorials can be used for commemorative purposes, often with a sacred character, or they serve practical purposes.

Manual or even artistic processing is the rule. Small structures such as chapels or shelters are added if there is no space for more than around five people. In a further interpretation, small human-made landscape elements such as ravines, dry stone walls and small quarries are also included. Components of buildings that have a monumental significance in addition to their decorative function, such as figures of saints, memorial plaques or house brands, are also classified as small monuments in an extended version.

Small monuments are partially listed ; but this is not generally the case. 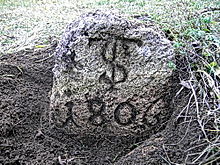 The small monuments include a variety of different objects. Without claiming to be exhaustive, they can be classified according to:

There is a strong overlap with the concept of the land monument : many small monuments are also land monuments and vice versa. However, the terms are not congruent because, according to their definition, landmarks are located outside of residential areas, whereas this need not be the case for small monuments.

Because of their small size and ignorance of their significance, small monuments were often lost. The weathering of sandstone and limestone as well as theft also contributed to the decline. There has been an increased awareness of the value of these historical witnesses since the 1980s. Organized associations were formed to maintain it.

In various regions there were and are organized campaigns to record small monuments. Anyone who discovers a previously unknown small monument or who would like to help that a severely damaged, threatened small monument is preserved, can contact one of these local initiatives or the responsible monument authority , i.e. the respective State Office for Monument Preservation . In Baden-Württemberg, the Society for the Preservation and Research of Small Monuments ( GEEK ) and the Swabian Heritage Association endeavor to record and protect small monuments.

In Carinthia and the Koroška region in Slovenia, land and small monuments were recorded, described and documented as part of an EU project by the Carinthian Educational Institute in collaboration with the Urban Jarnik Institute, the Koroški pokrajinski muzej and the Maribor Monument Authority.