The title of this article is ambiguous. Further meanings are listed under wine press (disambiguation) .

The following important information is missing from this article or section:
The article has gaps. The different types of wine presses are sometimes only described minimally, and more meaningful pictures are missing. The historical development is also expandable.
Help Wikipedia by researching and pasting it .

Tree press in the open-air museum Roscheider Hof , Konz on the Moselle 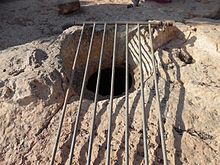 A wine press (from Latin calcatorium , German foot-stepping , after the usual way of working to pound the pressed material barefoot), in Graubünden , South Tyrol and Swabia Torkel or Torgg (e) l , called Trotte in eastern Switzerland and the Upper Rhine region , is a press for the production of fruit and fruit juices , also as a preliminary stage for wine and fermented must . Various mechanical conversion processes (levers, gears, etc.) as well as drive processes (muscle strength of animals and humans, electrical energy, etc.) are used to increase the pressure . Modern presses use compressed air and / or negative pressure for pressing.

As an abbreviation, the designation Kelter as well as the Torkel and the Trotte also stand for a press or wine press house , the room or the building in which the press stands. 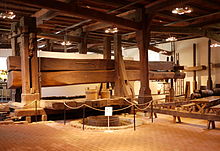 Pressing (from Latin calcare , German to step with your feet ) describes the pressing of grapes or other fruits. The fruits are usually already in a crushed form as a mash in order to facilitate the extraction of juice. Often keltern also used synonymously for wine making in general ( "wine is made" d. E. Produced).

In terms of landscape, also in the Graubünden Rhine Valley, the terms Torkel , Torggel or Torggl are also used for wine press (from Middle Latin torcula , Latin torcular , torculum "press", derived from torquere "turn"), especially in the highest Alemannic region, in Switzerland, also trotting . In south-west Germany the term "Kelter" or "Torkel" refers to the tree press, while the term "Trotte" refers to the spindle press.

For centuries, grapes were pressed by stamping the mash with their feet. The Romans then used wooden lever presses, so-called press trees or tree presses . Later, spindle presses were used as they are modernized and still in use today. These spindle presses are now being replaced by pneumatically operated presses in which compressed air is used to press a plastic membrane against the material to be pressed. This membrane is mounted in a tank-shaped press drum ("tank press"), which can be designed in different ways:

In the meantime, there are also presses that draw the pressed material to the juice channels using negative pressure (“vacuum tank press”). In smaller presses, for example for the hobby area, water is also used to "inflate" the press membrane. In this case the press membrane is usually made of rubber . 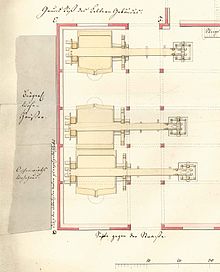 How the tree press works

North of the Alps, the tree presses were probably taken over directly by the Romans; however, it is also possible to revive the winepress tree as part of the early medieval monastery culture. The fact that many components of a tree press have Latin names does not allow any conclusions to be drawn as to how they were taken over in southwest Germany. However, there are already images of tree presses in medieval manuscripts, which were used almost unchanged as grape presses until the 20th century . If the tree press was big enough, you could generate a pressure that was hardly inferior to modern presses.

Several wine dryers were required to serve it. First the winepress tree was "opened" by lowering the heavy stone to the ground. Then the pressmen poured the grapes onto the press table and covered it with bars to evenly distribute the pressure. The juice, the "Vorlass", which ran off in advance without pressure, made the best wine. When it had expired, the pressmen turned the heavy stone at one end of the press tree upwards by moving the thread on the spindle upwards.

The stone now hung freely in the air, pressing the heavy trunks of the winepress down. Once the sap was pressed, the tree had to be opened again. With the help of an ax, the pomace was cut up and layered again so that the pressing process could be repeated and the juice yield increased. Only when the marc was largely dry did the pressing stop. However, water was often poured onto the marc and then pressed again. The watery grape juice was fermented into wine and consumed as a house drink. In some areas the freshly squeezed wine was sold "under the wine press", that is, it was not stored by the wine growers .

The pressing of other types of fruit was largely the same, only larger and more stable fruits such as apples and pears had to be crushed beforehand.

Tree presses are also mentioned in written sources as early as the 14th century. Perhaps the tree pressers were initially outdoors, but no later than the early modern period, buildings were built around them so that the grapes could be pressed in any weather. The oldest known tree press in German-speaking countries is in the Weinschlössl Godfried Steinschaden in Engabrunn (Kamptal wine region in Austria). The press tree is adorned with the year 1564. The tree press was originally located in the Göttweiger Lesehof in Engabrunn. In the areas with intensive viticulture, the wine press houses are not infrequently the largest historical buildings on site - apart from the churches - larger than town halls or town houses. In order to maintain order in the wine press houses, the gentlemen issued wine press orders, which are recorded in the stock books or land registers. Often the gentlemen were responsible for the upkeep of the presses and received part of the pressed grape juice in return.

The Metzingen Wine Museum in Baden-Württemberg has the world's largest ensemble of wine press houses. On a square originally located on the outskirts of the city there are still seven wine press houses that are used differently today. A winepress tree from 1655 can still be seen in the Viticulture Museum. With the incorporated towns of Neuhausen an der Erms , where a winepress tree from the early 17th century has also been preserved, and Glems , the city has ten former wine presses. Only in a wine press in Neuhausen are grapes still pressed today.

The winepresses with their winepress trees were partly used until the 1960s and only then replaced by electric presses. In the press houses there were mostly several press trees. After these were no longer needed, most of them were dismantled, so that only a few functional tree presses have been preserved as historical cultural monuments. Superfluous wine press houses were also demolished or they were preserved as distinctive buildings by converting them. The seven wine press houses on the square in Metzingen are now used as a festival press, wine and fruit growing museum, sales room for the winegrowers' cooperative, restaurant, fruit store, city library and market press.

The first mechanical presses used a spindle to generate the pressure required for pressing . This spindle vats called screw presses require significantly less space than tree vats. As can be seen from the pictures, both the frame and the spindle were made of wood in the first models. For reasons of durability, the material was replaced by metal over time.

Among the most original wine press structures are the round and covered wine vats or wine troughs (Catalan tines or Spanish lagares ) from the early 19th century in northwestern Catalonia (e.g. at El Pont de Vilomara i Rocafort and Talamanca ). These silo-like structures (photos and information → weblink), which looked rustic and ancient on the outside, were lined with large earthenware tiles up to about half their height on the inside . They date from the time before the phylloxera crisis , were located right on the edge of the vineyards and were used for the immediate processing (pressing and fermentation) of the grapes. Sometimes the circular buildings had a small house-like porch in which tools were stored and which often served as a changing room before and after the pressing.

In South Tyrol , the Törggelen following the grape harvest had been a festive event for some time. As part of the return to traditional notions of quality in wine production in the period around 1990 also emerged in the German wine - or Most areas wine festivals or wine daily. Grapes or fruit are pressed in public, the result can then be tasted on the spot. Hand-operated screw presses are typically used here. The reconstructed Roman wine presses on the Moselle are a specialty. In these the mash is traditionally stamped with the feet at wine press festivals.