A screw press is a simple gear that converts a rotary movement into a vertical displacement ( translation ) in the axial direction of the threaded spindle . The translation via the long lever arm of the rotary movement on the inclined plane of the thread creates a transmission ratio. The high pressure forces that can be achieved in this way were already used in many technical ways in the Middle Ages , especially in letterpress printing .

The invention of the threaded spindle is attributed to the Greek polymath Archimedes (287–212 BC) (see Archimedean screw ). Screw presses are based on the same principle, but are historically only known from the late Middle Ages .

The first screw presses were pushing or Balancierwerk (fr. Balancier ) called and probably the first time in Italy built. The first documented use of a simple screw press is said to go back to Donato Bramante (very limited) and Benvenuto Cellini . Screw presses were first used mainly for the production of medals .

Around 1550 , a spindle minting machine by the Augsburg goldsmith Max Schwab is said to have been used for the first time to mint coins. Thereupon Elois Mestrelle tried to introduce spindle minting in Paris and London , but failed because of the resistance of the Münzer . It was not until over a hundred years later that the spindle mint was introduced in all major mints. The sophisticated spindle minting mechanism allowed an increase in the output volume and a more precise minting, whereby up to 30 coins could be minted per minute.

The Royal Mint Museum in London is showing one of the first dies that were made to fit the new spindle mills. These are the stamps of the Cromwelltaler with the typical stamp line from 1658 from the short time of the English Republic, which were first minted by machine.

The upper punch is lowered onto the flute and lower punch by means of a spindle screw . To generate the embossing pressure , the force is transferred to the spindle through a double-armed oscillating axis , at the ends of which heavy oscillating weights are attached. The swing arms were prepared by several workers (depending on the deformation energy of 2 to 12 man) by means of pull belts cranked or triggered. Due to the momentum and leverage of the heavy weights, the embossing pressure was so strong that a lowering of the upper punch was sufficient to achieve a very good embossing effect (with hand or hammer embossing , several hammer blows often had to be performed on the planar to achieve a satisfactory effect ) Due to the severity of the impact, the spindle stamping works had to be firmly anchored in the foundations on the ground floor or basement of the mint building. In front of the spindle mechanism, there was usually a recess or pit in the foundation, in which a mint sat who placed the flint in the lower die and removed the minted coins again after the spindle thrust. The spindle stamping machine was still in use until the 19th century and was only gradually replaced by the toggle lever stamping machine invented by Uhlhorn in 1817 .

Our illustration shows a screw press with which medals with a diameter of up to 30 millimeters can be stamped. The Gotha Mint (see picture there) owned a large screw press from the middle of the 18th century with which coins and medals of all sizes were minted. It was installed in 1981 under the arcades of Friedenstein Castle in Gotha . 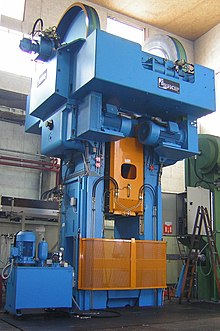 Schematic representation of the function of a friction wheel screw press

Friction wheel screw presses have two drive disks on the machine head that can be moved axially. The pulleys are driven by electric motors via flat belts . At the upper end of the spindle is the flywheel, which is equipped with a leather bandage on the circumference .

In larger machines, the two drive pulleys can be driven and moved independently of each other. This serves to minimize the wear and tear of the leather bandage by utilizing the bounce and a slower running drive pulley for the upward stroke.

The drive of a clutch screw press consists of a permanently rotating flywheel located in the axis of the spindle . For the downward stroke , the flywheel is connected to the spindle via a non-positive coupling and disconnected just before bottom dead center. Since the direction of rotation of the flywheel is not reversed, a separate drive is required for the upstroke.

The drive of this machine is based on the fact that the rotor is part of the flywheel and the stator is part of the machine body. For the up stroke as in the Reibspindelpresse, a reversal of the direction of rotation of the spindle and flywheel is needed.

So far, directly driven screw presses have been designed with the principle of the asynchronous motor . This design is characterized by its robustness and largely maintenance-free. A frequency converter can reduce high starting currents and achieve very precise controllability. In addition, the return stroke can be used as a generator and the brake is therefore only used as a holding brake. More recent developments are aimed at using a synchronous motor with a permanently magnetically excited rotor . Here, too, the stator is part of the machine frame and the rotor part of the flywheel. The main difference is that the rotor is very simple. Instead of a squirrel-cage rotor, the rotor consists of a steel ring with permanent magnets attached to its outer diameter.

The advantages of this type of machine are an exact dosage of the forming energy and the elimination of wearing parts such as the leather bandage in friction wheel presses or the coupling blocks in coupling screw presses .

Modern torque drives mean that there is no need for a flywheel or gearbox. A torque drive acts directly on the spindle via a coupling and guides the ram up and down by alternating clockwise and counterclockwise rotation. Since the synchronization of individual drives is very precise, the use of several spindles can generate correspondingly large forces. The advantage of this press concept is the availability of the complete nominal press force over the entire stroke. By using several spindles, the ram can also be kept parallel at all times and therefore does not tilt. Since the spindle transmits very large forces and the accuracy requirements are high, planetary roller screw drives are used.