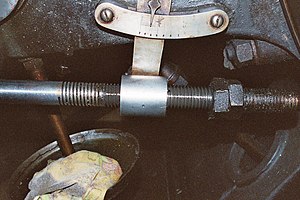 "Movement screw" on a machine

Trapezoidal thread of a threaded spindle

Threaded spindles , sometimes also called motion screws , are machine elements that, together with other elements in a helical gear , serve to convert a rotary movement into a translational movement. Threaded spindles consist of a threaded rod , i.e. a cylindrical round rod on which a trapezoidal or flat thread (movement thread ) is applied for simple applications . 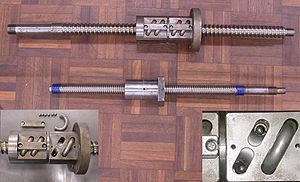 With ball screw spindles, also called recirculating ball spindles or ball screw drives , the linear movement is picked up on the spindle nut threaded onto the spindle . For applications that require high accuracy and zero backlash, there are spindles that have a special thread and are paired with nuts in which balls rotate in a closed system. These ball screws occurs between screw and nut, similar to a ball bearing , rolling friction as opposed to sliding friction for spindles with flat and sharp threads.

Threaded spindles in machine tools for longitudinal movement of the tool carriage , which the tool chuck wears, or the workpiece feed, with the hand wheel or a step-up gear used. Modern machine tools almost exclusively use ball screws with recirculating ball nuts clamped against one another .

The magnetic head in a floppy disk drive is also moved with a threaded spindle.

In automation technology for special machines, units with recirculating ball spindles are used for precise, sometimes dynamic positioning tasks. Complete units of drive motor, linear guide and threaded spindle can also be combined in two or three spatial directions. Such an arrangement in three spatial directions can be used in a portal robot .

Screws, which are used, for example, for occasional level adjustments of machines, have a similar function, but for reasons of cost they have the usual pointed thread of screws for fastening purposes .