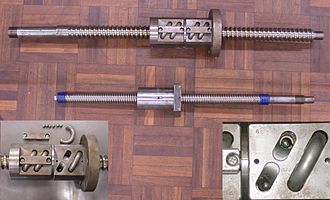 A ball screw drive (KGT) is a screw drive in which inserted balls transmit the force between screw and nut. Both parts each have a helical groove with a semicircular cross-section, which together form a helical tube filled with balls. The positive connection in the thread perpendicular to the helical line is not formed between the thread groove and dam (" tongue and groove "), as usual , but the balls. When the screw and nut rotate, the balls roll in their tube and move towards the front end of the nut. There they are usually picked up by a small tube attached to the outside, led to the rear end of the nut and introduced back into the thread.

In comparison to conventional screw gears with surfaces sliding on each other, in which around 50 to 90% of the introduced power is converted into heat, ball screws have

Their higher manufacturing costs and their larger volume are offset by these advantages as disadvantages.

The main areas of application are machine tools such as lathes on which workpiece or tool carriers have to be positioned. The part to be moved is usually attached to the nut and at the same time supported by linear guides . Ball screws have almost completely replaced the previously common trapezoidal screw spindles in many areas of mechanical engineering. New designs are also opening up further areas of application in which hydraulic systems were previously mostly used, such as in presses and injection molding machines . They are used as steering gears in trucks ; in the past they were also used in cars.

A motor drives the spindle either directly or via gears and belt drives. Balls move (roll / roll) between the spindle and the nut and move axially when the spindle is turned. The return channel in the spindle nut conveys the balls back again and thus closes the circuit in which the balls circulate.

Ideally, the rotating balls touch both flanks of the thread at one point each without play (Gothic groove). If there is play, it can be readjusted.

A characteristic feature of the ball screw is its pitch . It is the straight distance ( stroke ) traveled by the spindle nut per revolution of the spindle, measured in millimeters . It corresponds to the distance between adjacent thread flanks (for single-start threads). This slope is not the same as the slope of that ramp that results from the rolling of the running groove to an inclined plane. That ramp slope is the quotient of the two sides of the slope triangle (stroke length per circumference) and is usually given as a dimensionless number in percent. The convention of specifying spindle pitches in millimeters and thus referring to one revolution or the speed instead of the circumference, simplifies most calculations for dimensioning a machine axis, since speeds and torques are usually transmitted from the drive motor. The incline and the speed in the product comfortably give the feed. However, the geometry of the ramp rolled up to form the spindle plays an essential role in the design of the ball screw drive.

Recirculating ball spindles should enable high feed rates under very different loads with high precision. In the case of ball bearings , the specification of the rolling speed of the balls has proven itself as a criterion for what is technically achievable. The technical limit for ball bearings was around 3000 m / min (180 km / h) in 1996.

Ball screw drives did not achieve this speed by any means at the same time, because the spindle nut cannot be designed with a permanently integrated ball cage . Therefore, the balls "click" against each other and against the grooves of the nut and spindle. Mainly because of this effect, a modern ball screw drive typically rolls at less than 200 m / min. An important limiting factor for the feed that can be achieved is the maximum rolling speed of the balls on the running groove. In order to use as much of this potential as possible for the lifting movement, high-speed spindles are designed with large pitches and small diameters. More recent developments are ball screws with ball chains , which run relatively quietly, since the above-described “clacking” effect has been greatly reduced in these modern systems.

The quotient of the pitch and the circumference of the spindle characterizes the shape of the helical line by mapping it onto the corresponding, unrolled ramp. This quotient is also known as the transmission ratio of the spindle. According to this definition, a transmission ratio of 1: 1 means 100% slope of the ramp. The pitch of modern high-speed spindles is a multiple of the respective spindle diameter. Ratios of 3: 1 have only been possible since 1996. The limitation arises from the need to find a compromise with the requirement of mechanical stability: the spindle transmits the forces with its running groove. Spindles that are too thin begin to vibrate under the influence of the radial components of these forces. To characterize the distribution of forces, the angle of inclination and the load angle are specified in accordance with DIN 69051. To compensate for the disruptive vibrations of thin high-speed spindles, specially matched spindle nuts used in pairs can be designed that function as vibration dampers.

There are dimensional standards for ball screws only for the connection dimensions. The dimensions of the standard spindles from leading manufacturers therefore vary considerably in some cases. Usually several different pitches are available for each spindle diameter offered, but within a not too wide range of the ratio of pitch to diameter.

The standard range on the market extends from so-called miniature ball screws, the screw pitches of which are in the range from 1 to 16 mm with a screw diameter between 6 and 20 mm, to screw drives with pitches of 50 mm and diameters up to 125 mm. Spindle lengths are offered between a few centimeters up to several meters, depending on the type. The manufacturers also frequently offer standardized spindle end machining for mounting the spindles and for connecting them to the drive motor .

Ball screw; Special feature: consisting of two nuts with variable axial spacing, which means that axial play in the ball screw drive can be reduced.

For the geometry of the nut: see article recirculating ball nut .

In order to reduce the play between spindle and nut to just a few micrometers or to eliminate it completely, various preload options are available. Two threaded nuts are often clamped against each other.

Other methods of generating the prestress are:

Ball screw drives can accommodate dynamic loads between a few kilonewtons (kN) up to the three-digit kN range , depending on the spindle diameter and spindle pitch .

The higher rolling friction due to preload generates a lot of heat at high speeds (e.g. movement of a machine in rapid traverse ), which, due to the linear expansion of the spindle, affects the precision of the machine axis concerned. High axial forces and high spindle speeds also exert heavy loads on the thread and ball. When the balls rubbing against each other under load, the torque required for movement increases and causes wear . Excessive heating can be counteracted with hollow threaded spindles through which a coolant flows.

The different types of stress can be taken into account to a greater or lesser extent through suitable manufacturing processes and the construction of the components.

A spacer ball that is a few micrometers smaller can be inserted between two normal, load-bearing balls . These spacer balls do not exert any pressure on the thread flanks and are therefore not forced to run, but are moved by the load-bearing balls against the actual direction of rotation. However, this method of reducing wear is only a compromise, because the lack of load-bearing balls reduces the axial load-bearing capacity of the overall system.

Ball cages made of plastic offer a further possibility for reducing the friction between the balls, but their realization is very expensive, which is why they are mostly only used in high-speed ball screws.

Common methods of making the grooves in the threaded spindle are thread whirling , rolling and grinding . Both the ball and the surface of the raceway are mostly hardened , with the raceway being often coated for high-speed spindles.

In modern, adaptronic ball screws, actuator elements installed between the nuts vary the preload and thus counteract the development of heat and reduce vibrations.

Furthermore, ceramic elements in the drive dampen the impacts under high dynamic loads and thus contribute to the positioning accuracy.

Ball or roller screw drives are in turn components of so-called actuators , which are widely used in drive technology.