Bramante is a redirect to this article. See also: Bramante (disambiguation) . 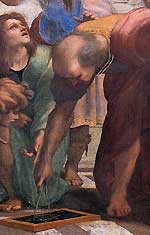 Bramante in Raphael's fresco The School of Athens 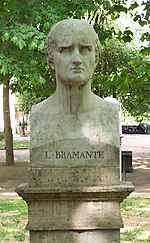 Donato Bramante , actually Donato di Pascuccio d'Antonio (* 1444 in Fermignano , † April 11, 1514 in Rome ), was an Italian painter, master builder and founder of High Renaissance architecture . From his maternal grandfather he was nicknamed Bramante , which means “the one who desires” ( Italian bramare = “violently desire”).

He received his training as an architect in Urbino from Luciano Laurana . Bramante first came into contact with painting at the court of the Montefeltro in Urbino. Bramante came to Milan around 1476, and in 1477 he worked as a facade painter in Bergamo . In 1479 he stayed at the court of the Sforza in Milan, where he carried out the first buildings. Bramante came to Rome around 1499 . There he trained on the ancient ruins of the city and so gradually developed his architectural style further in the direction of so-called High Renaissance architecture, the founder of which he is considered to be. In doing so, he was guided by the ruins of the Roman imperial era with their large-scale, harmonious monumentality.

Bramante encountered an extremely fruitful artistic climate in Rome, which Pope Julius II provided from 1503 . In addition to Bramante, the Pope employed a number of other important artists. Among them were Giuliano da Sangallo and Michelangelo . Bramante prevailed against both when it came to the construction of St. Peter's Basilica from around 1504 . Julius II approved Bramante's designs, and so the new building began in 1506 under Bramante's responsibility. When Bramante died on April 11, 1514, one year after the death of his patron Pope Julius II, the four domed pillars and a temporary choir were in place, which had been started according to plans for a central building; A shelter ( tegurio ) rose above the tomb of Peter .

Bramante was also active as a painter . Only a few works have survived. Michele Sanmicheli was one of his students .

Presumably, after his election as Pope in 1503, Julius II commissioned Bramante to connect the Belvedere with the city, but the first receipt received dates from 1512, when the work was still ongoing. For this purpose, Bramante created a 19-meter-high staircase supported by columns, which rises in a spiral without steps and could also be used by riders. Viewed from the outside, the staircase appears as a tower with a square floor plan, only the arched windows of different heights on the top level give an indication of the rising ramp inside.

This consists of four complete and one half spiral turns, which are provided on the inside with a total of 36 columns made of gray granite. The column order changes with each spiral turn. The 8 columns in the Tuscan order of the lowest turn are followed by 8 columns in Doric and Ionic order , and finally 12 columns in composite order . The diameter of the pillars is almost halved on the way from bottom to top, their length remains the same. The inclination of the windings is compensated by scamilli , blocks with a triangular cross-section below the bases and above the capitals made of travertine.

This original Bramante staircase ( Scala del Bramante in Italian ) is in the Museo Pio-Clementino . At the exit of the Vatican Museums there is another spiral staircase: a double spiral staircase created by Giuseppe Momo in 1931/32. Because of the structural similarity, it is also sometimes referred to as the "Bramante staircase". The same name is also applied to a staircase with idiosyncratic architecture that is located in the Marie-Elisabeth-Lüders-Haus in the government district of Berlin designed by Stephan Braunfels .

A Mercury crater and the asteroid (12147) Bramante are named after Bramante .