The Erechtheion on the Acropolis in Athens from the southwest

The Ionic order is one of the five classical column orders . In the hierarchy of orders it stands between the Doric and the Corinthian order .

The beginnings of the Ionic order go back to the beginning of the 6th century BC. BC back. It was initially widespread mainly in Ionia in Asia Minor , on the Ionian islands of the Aegean and in Attica . The name Ionic order is derived from the Ioni , one of the Greek tribes. After the penetration of the Dorians as a result of the Doric migration , they moved mainly to the east, to the islands of the Aegean Sea and to the west coast of Asia Minor . Furthermore, they were able to assert themselves against the Dorians in the area around Athens . The formation of the term consciously emphasizes the contrast to the second important building code of the Greeks, the Doric. The Ionic order never achieved the strict rigor of the generally applicable rules of its design, such as the Doric order. The initial conditions in the fragmented settlement area were too different. Only in the 4th century BC A kind of Ionic canon was formed , operated primarily by architects from Asia Minor who deliberately dealt with the Doric order and delimitation.

The Temple of Apollo in Didyma

While convincing connections to timber construction can sometimes be demonstrated - such as the tooth cut as the former protruding beam heads - one of the roots of the Ionic order lies in the pure stone construction of the Cyclades, which primarily influenced Attic architecture. Ionic buildings are characterized by their pronounced individuality and the tendency of the workshops behind them to work in small local styles. This goes far beyond the rough contrast between Attic-Ionic and Asian Minor-Ionic styles and, especially in the early days, divides the Ionic order into different styles such as the Sami or the Ephesian, which formed very different column bases, even if no locally limited style could be grasped is. Only in the course of development were the forms more and more standardized and harmonized, elements and structural elements were transferred from one landscape area to the other. For example, the Attic base also prevailed in Asia Minor, but was there combined with the Asian Minor Plinth . The originally island frieze was also adopted via Athens in Asia Minor, where initially only the tooth cut above the architrave was known. The tooth cut now migrated to the frieze, but, as before, served the geison , mediated by a wave profile, kymation , as a support. The architrave could be smooth or have two or three horizontal fasciae protruding slightly forward. The form with three fasciae was adopted in the canonical apparatus of forms. At Geison, with the introduction of consoles in Pergamon , Rhodes and Alexandria from the 2nd century BC Chr. Introduced a serious innovation, which the Geison originally formed as a simple hanging plate almost replaced in the course of further development.

Like the Doric columns, the Ionic ones had a swelling of the shaft, the so-called entasis . However, it was never as pronounced as on its Doric relatives. The fluting of the column shafts was in the 6th century BC. BC still worked with a sharp ridge similar to Doric columns. Their number fluctuated between 28 and 48. It was not until the 5th century BC. A flat bar was introduced between the flutes, which were now deeper cut, the number of which leveled off at 24. But there were still exceptions, such as in the Doric-influenced Argolis , which only knew Ionic columns with 20 fluting. The lower parts of the column shafts were sometimes faceted from the Hellenism onwards , and the fluting in the lower third was often filled with so-called pipe sticks. As a special form, the column neck could be adorned with anthemic ribbons , or the column base was decorated with figural reliefs, the columnae caelatae . Examples of this can be found in the older and younger Artemision of Ephesus and the Temple of Apollo in Didyma . The volute bands of the Ionic capitals could in the early period up to 500 BC. BC, but were later fluted concave under Attic influence and worked out as Canalis . The initial freedom and independence of the Ionic order is also shown by the fact that it was able to incorporate other forms of capital into the order, such as the Aeolian capital, the egg-shaped capital or the Corinthian capital . 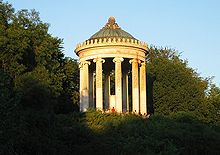 Monopteros in the English Garden in Munich

The Ionic order is much more decorative than the Doric. Intermediate wave profiles were used everywhere between the structural members, which were mostly decorated with pearl rods , egg rods , lesbian kyma or other ornamental shapes. At the same time, the Ionic order sets itself apart from the much more powerful and compact Doric order through an emerging slimness and lightness that permeates the proportions of all structural elements. Still Vitruv (IV 1, 7), the ionic column with which compares gracilitas , the thinness, the female body. With these properties, the ionic order was predestined to be used in a wide variety of building contexts. Above all, she soon conquered the interior, even in the Doric area, as did around 400 BC. The temple of Apollo built near Bassae is documented. Thanks to its versatility, it spread throughout the Greek-influenced cultural area and also found its way into Roman architecture. With the rediscovery of ancient architecture and the onset of Vitruvian reception in the Renaissance, the appreciation of the Ionic order began again. It has enjoyed a certain popularity until modern times, as the Monopteros in the English Garden in Munich shows.

Structure of the ionic order

The foundation and plinth of a building of the Ionic order consist of the stereobat (foundation) and the Krepis (step substructure). The foundation is mainly in the ground and is only visible on the smoothed and semi-exposed top layer, the euthyntery . The foundation follows the Krepis with its three steps. The top step is called stylobate and serves as a base for the rising pillars. In the early days, however, the step structure is not necessarily given, rather the stylobate can lie directly on the euthyntery. Only from the 5th century BC He meets regularly in the 4th / 3rd century BC. Century BC Adopt enormous dimensions and slightly double the number of steps compared to Doric buildings, on the younger Artemision of Ephesus the Krepis even had at least ten steps.

The column does not rise directly on the stylobate as in the Doric order , but has a base . The Ionic base from Asia Minor usually consists of a square base plate, the plinth , and a series of chamfers, under a concluding horizontal bulge. The lower part is called the spira , the mostly horizontally fluted bulge is called the torus . In the case of the Ephesian base, the Spira has two deep throats, each framed by double round bars. The slightly drawn-in spiral of Sami bases, on the other hand, has a sequence of around seven horizontal fluting. In contrast, the Attic-Ionic base is originally plinthless and consists of a wider, lower torus, followed by a groove, the so-called trochilus , and a final torus. Compared to Doric columns, Ionic columns are much slimmer and taper only slightly.

The fluting of the Ionic column also differs from that of Doric columns: if the fluting in columns of the Doric order meet with sharp ridges, a narrow web remains between the fluting of Ionic fluting. This is also referred to as bar fluting or butt fluting . The number of fluting is usually between 20 and 24, with 24 fluting being the 'classic' number. But it can also be significantly higher.

The Ionic capital carried by the column, like the Doric capital, has an echinus , which is more delicate than the Doric capital and usually carries a narrow rod of pearl followed by a strongly formed egg rod as an ornament. Above the Echinus lies the typical pulvinium with lateral volutes , a cushion that is rolled up to form furrowed snails. The inner volute, the so-called canal , which rolls up like a snail shell , can be deeply fluted, flat or even filled with a round rod and accompanied by narrow webs. Palmettes or other floral motifs can arise from the spandrels of the volutes towards the center of the capital. The abacus is flat, smaller than the pulvinium and often decorated with a lesbian kymation. In contrast to the Doric capital, the Ionic capital is not seen from all angles, but has a front and a side view. The volute cushions that can be seen from the side are mostly constricted in the middle, whereby various leaf motifs could be used as a lacing element.

The entablature is usually divided into two parts. The architrave is smooth or divided into up to three slightly protruding steps, so-called fascia. Above it either follows a simple cornice with a tooth cut as a variant from Asia Minor Ionic as in the Temple of Athena in Priene or a frieze , which can be smooth or sculpted in the Attic-Ionic form, represented for example by the Erechtheion in Athens. Occasionally, the frieze and tooth cut can also be found together in Ionic entablature, for example on the younger Temple of Apollo at Didyma . A simply curved geison completes the entablature. The eaves gutter, Sima , of the Ionic order could be lavishly decorated and carry figurative friezes as well as tendril friezes or anthems.

Since the Ionic column is designed for the frontal view, not like the Doric one for the view from all sides, the so-called Ionic corner conflict arises at the corner columns of all Ionic buildings, as the corner volutes of two sides meet here. This conflict is mostly balanced out by turning this volute out by 45 degrees. With the from the 3rd century BC The four-sided diagonal capital, in which all four volutes are turned by 45 degrees, becomes more and more popular, making the Ionic corner conflict obsolete.