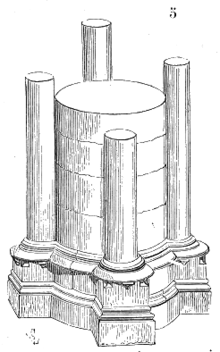 Base of a Gothic column

A base ( Latin basis "base", from ancient Greek βάσις básis "foot, foundation, foundation") is the lowest component of a column on which the shaft rests. The base itself can in turn stand on a base (Latin socculus "little shoe"), which usually has the shape of an unadorned cuboid .

Even the columns of the Egyptians had simple pressure-distributing stone slabs ( plinths ) under their initially monolithic column shafts. The Cretan pillars then had a shaped, cushion-like stone slab.

Attic base of a church column with braided ribbon decoration

The basis of the order of columns in Greek architecture was continuously developed. The frequently used "Attic base" consists of two convex bulges ( torus ) and a hollow groove ( trochilus ) in between. They are each separated by thin plates with a vertical profile. It is used in both the Ionic and the Corinthian columns . Due to the succession of plates with diameters increasing towards the floor and alternating profiling, the transition to the large contact area is optically intercepted and aesthetically softened. Only the Doric order does not use a base and places the column shaft directly on the top step of the temple substructure.

The lowest plate ( plinth ) is a square plate, which fits into the joint pattern of the top step of the temple structure ( crepe or stylobate ). Since the Greek temples were built with a curvature , a compensation had to be made under the plinth to the inclined surface of the top step of the crepe, which was achieved by the wedge ( scamillus ) worked on the top step .

While the bases initially only had smooth surfaces, more recent buildings have bases richly executed with meanders , braided bands , foliage and other ornaments .

In Romanesque architecture and early Gothic architecture, the hard transition from the lowest base plate to the square base plate ( plinth ) was softened by adding "leaf tongues" or corner spurs. These were leaf-like, bulb-like or spur-like decorations on the four corner spandrels of the footplate. In the Romanesque these corner gussets were also decorated with mythical creatures , drolleries or heads.