Temple of Artemis at Ephesus

Ruins of the temple in Ephesus , behind it the Isabey Mosque , St. John's Church and the citadel of Selçuk

The temple of Artemis in Ephesus or the Artemision of Ephesus for short was dedicated to the Olympic deity Artemis (goddess of the hunt, the forest and guardian of women and children) in her special form as Artemis Ephesia . It is said to have been founded by the Amazon queen Otrere and, as the largest temple building, was one of the " Seven Wonders of the World " of antiquity . The ancient Greek city of Ephesus near today's Selçuk on the southwest coast of today's Turkey was famous for its wealth and later, as the capital of the Roman province of Asia, one of the largest cities of antiquity.

The first excavations took place between 1863 and 1869 by the Englishman John Turtle Wood . In the course of work in the city of Ephesus, the Austrian Archaeological Institute has been digging on the Artemision site since 1895. Architectural fragments and other found objects as well as several copies of the Artemis statue that were found in the urban area are exhibited in the Artemis Hall in the Ephesos Museum in Selçuk, finds from the older excavations are in the Ephesos Museum in Vienna.

In the course of the Austrian excavations since 1895, several phases of use of the sanctuary and construction phases of the Temple of Artemis have been proven. The area through which the coast ran, into which a river flowed during the later Artemision, was used as early as the Bronze Age . It is not clear whether it was already a place of worship in the Late Bronze Age - existing older layers could not be explored due to the low groundwater level. Remains of the wall from that time have not yet been discovered. From the 10th to the 7th century BC The area of ​​the low hill on which the Temple of Artemis was later built was expanded several times by terracing . Numerous vessel fragments were discovered in the embankments, the oldest from the late 11th century BC. From early Protogeometric pottery . In contrast to the ceramic finds from the Bronze Age, these are predominantly Greek ceramics. The often fresh broken edges reveal that the vessels were broken on site, which, like small vessels and animal statuettes made of clay, suggests ritual acts. The first simple places of worship, the cult image sheltering Naiskoi , originated in the Middle Geometric period. In the 8th century BC One built with the temples "A" and "B", z. Partly as wooden structures, the earliest peripheral temples in Asia Minor. Allegedly under the little known tyrant Pythagoras was in the 7th century BC. The archaic temple "C" was built, which was destroyed by flooding before completion.

The 6th century BC temple Chr.

The successor temple "D" was built around 550 BC. Started. Architects were Chersiphron of Knossos and his son Metagenes . The construction work on this temple, for which the Lydian king Kroisos also donated some columns, took an unusually long period of 120 years by ancient standards. The construction was extremely difficult as the building was erected on a swamp area. The discoloration of the earth, which could be observed during deep excavations, confirms the ancient reports that charcoal and leather coverings were used to secure the boggy subsoil when preparing the site for the temple construction. The architect Theodoros of Samos , who had already worked on the Rhoikos Temple in Samos, is said to have been involved in the foundation work. The striking similarities between the Temple of Artemis and the Heraion of Samos suggest that his involvement was not limited to the foundation work.

Vitruvius describes some of the new technical inventions by Chersiphron and his son that were used in the construction of the Temple of Artemis. The column shafts were not transported on ox carts as the roads from the quarries 8 miles away were soft. Instead, iron shafts were attached to the ends and the columns rolled, as well as the parts of the architrave, for which a wooden wheel was wrapped around the rectangular ends on both sides. A ramp made of sandbags was built to place the architrave blocks on the 18 m high columns. When the stone was in position on the ramp, the sand was drained from the bottom sacks and the stone was lowered. This did not quite work with one stone and, after Vitruvius, Chersiphron was already thinking of suicide. In a dream, Artemis calmed him down and the next morning the stone had moved into the correct final position due to its own weight.

The archaic temple “D”, built from a white-bluish marble of the area, rose on a 111.7 x 57.3 meter, only two-tiered substructure and combined a dipteral outer system with a hypäthral , i.e. open secos . 106 Ionic marble columns around 19 meters high surrounded the Sekos. The column bases of the Ephesian type stood on plinths about 2.30 meters wide . The final torus of the bases was not subject to any uniform design, but had, in addition to simple grooves, also gently overlapping rows of leaves. The design of the fluting also varied , the number of which could be 40 or 44, but also 48 and sometimes were separated by fine ridges of the same width, and sometimes had wide and narrow flutes alternating. An anthemion adorned the neck of the column. On the front and back, the columns were staggered two and three rows deep. The column shafts in the entrance area were decorated as columnae caelatae with reliefs above the bases. The probably first marble architrave of Greek architecture spanned from column to column and reached the largest span ever achieved by the Greeks. The central arch of the front weighed around 24 tons and had to be laid with centimeter precision on the almost 20 meter high columns. The approximately 86 centimeter high Sima showed mythical battles in flat relief, which strung together as an endless ribbon depictions of warriors, horses and chariots.

The back of the temple likely featured a closed adyton instead of an opisthodome . The two-meter-high Artemis statue in the open Sekos was made of vine wood and covered with gold and silver . The roof of the peristasis was made of cedar wood. Heraclitus consecrated his book on the logos in the temple on the altar of Artemis.

The temple fell on July 21, 356 BC. Victim to arson by Herostratus . He committed the deed out of a desire for recognition - he succeeded in his plan to become famous and thus immortal by burning down the wonder of the world. According to legend, on the night of the fire, Alexander the Great , who later also provided great financial support for the reconstruction of the temple, was born, which is why Artemis, who supervised its birth in Pella , could not protect her own sanctuary.

The temple of the 4th century BC Chr. 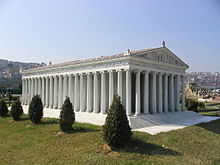 The late classical construction (Temple "E"), with which you started out soon, was Cheirokrates or Deinocrates designed as bauleitendem architects. The old temple was supposed to be faithfully restored, but some changes were made. On the rubble of the previous building, a larger area - already noted by Strabo - now 125.67 meters × 65.05 meters, 2.7 meters high - was created as the substructure of the new temple and the base with its now ten-step crepe was increased considerably. According to Pliny, the Temple of Artemis "E" had 127 columns with a height of around 18 meters and a stone roof. According to the report of Pliny , he is said to have had 36 columns decorated with reliefs, columnae caelatae . One of these reliefs is said to have created Skopas .

This temple also took a relatively long time to build, around a hundred years. Nonetheless, all of the components of this temple came to be where the predecessor had them. Column sat above column and wall sat above wall. The columns now consisted of 24 fluting, separated from one another by webs. Some of the columnae caelatae sat on large cubic plinths, also decorated with relief, without it being possible to determine their position on the building more precisely. Like its predecessor, the entablature lacks the frieze, which is unusual in Asia Minor . According to the identification of coin representations, huge gables with three doors used for cultic purposes must have adorned the fronts. 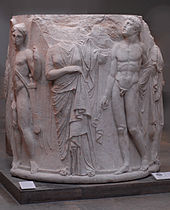 Columna caelata of the Temple of Artemis (Temple "E") in the British Museum , London

The construction work apparently began after 250 BC. BC, although some structural members were left in their raw form. Antipater of Sidon describes the temple in his epigrams about the seven wonders of the world:

“But when I finally saw
Artemis' temple, which rises into the clouds,
the other faded away. I said: Has Helios' eye
ever seen anything the same apart from high Olympus? "

The temple came back into the focus of world history when around 46 BC. Chr. Arsinoe IV. , The younger sister of Cleopatra VII. , Came into exile in the temple. However, since she represented a potential threat to her sister's claim to power as a blood relative, she was declared on her initiative and on the orders of Marcus Antonius as early as 41 BC. Probably executed on the steps of the temple itself; the high priest, who had dubbed her “Queen” on her arrival, was only spared upon appeals for clemency. Incidentally, the right of asylum was soon withdrawn from Augustus de jure.

When the apostle Paul came to Ephesus around the year 55 AD, he was said to have been so popular that many residents feared for the cult of Artemia and for their economic existence. The "revolt of Demetrios" - a silversmith and manufacturer of devotional articles  - is described in the 19th chapter of the Acts of the Apostles ( Acts 19 : 21-40  EU ) and was reinterpreted from the opposite point of view by Goethe in the poem "Great is Diana of the Ephesians" .

During the reign of the Roman Emperor Gallienus , the magnificent building was destroyed by the Goths on a war campaign in AD 268 , and the remains were used as building material by the inhabitants . However, the Ephesians did not give up the Artemis cult until the 4th century. Today a re-erected column testifies to the former wonder of the world.

The Amazons of Ephesus

Around 430 BC BC Ephesus announced a competition to create a statue of an Amazon for the sanctuary :

“But the most highly praised artists competed with one another, although they were born at different times: since they had created the Amazons that were to be consecrated in the temple of Diana in Ephesus, it was agreed that by the judgment of the to let the artist present themselves determine the most recognized artist, when it was obvious that one Amazon would be awarded the second prize after their own. She is the Amazon Polyklets , Phidias took second place, Kresilas the third , Kydon the fourth and the fifth Phradmon . "

In addition to further enumerating mentions of the statues in ancient literature, two details about them are handed down: The Amazon of Kresilas was wounded (Kresilas fecit ... Amazonam volneratam) , and the Amazon of Phidias leaned on a lance and was exemplary in the shape of her mouth and a nice neck. The originals have been lost, but Roman copies give a good impression of three of the aforementioned Amazons. Because among the surviving statue types, the Amazons of the Sosikles , “Mattei” and “Sciarra” types go back to the competition. The allocation of Amazon types to individual artists is controversial to this day, especially since all three types depict the Amazon as wounded.

Commons : Temple of Artemis at Ephesus  - Collection of images, videos and audio files