Reconstruction of the Temple of Apollo at Didyma

The Hypäthral temple ( Greek  ὑπαίθριος "under the open sky") is a temple whose cella - called Sekos at the Hypäthral temple - was not covered. An early example of this was the archaic Dipterus of Artemis of Ephesus , which was probably designed as a Hypaithros.

The Sekos could be designed like an inner courtyard in which the Adyton stood freely , which could itself be constructed in the shape of a temple (e.g. Didyma , Temple of Apollo). The Sekos was accessible through the covered vestibule, the Pronaos . In Didyma, the effect and drama of the gigantic seko was enhanced by a 15-meter-wide, cheek-framed staircase with 24 steps that led from the covered pronaos into the sunken 22-meter-wide, 54-meter-long and over 25-meter-high inner courtyard, the walls of which were pilasted were structured on a high plinth . In a Sekos of this size even the stately Athenaean temple of Tegea would have found space.

The name Hypäthral Temple goes back to Vitruvius , who calls this type of temple hypaithros and cites the Olympieion in Athens, which was not completed at the time, as the only example . The building, which was completed under Emperor Hadrian around 130 AD, is not an example of a Hypäthral temple. 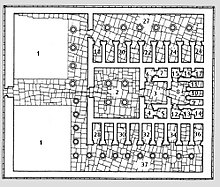 Hypäthral temples already existed in ancient Egypt . An example of this is the temple of Kamutef of Karnak , which was dedicated to the god Amun-Re-Kamutef under Hatshepsut .

Hatshepsut originally built the main temple at ground level. The forecourt (1) extended over the entire width of the building and protruded two-fifths into the temple building. The remaining part was divided into three almost equally large areas that had no direct connection with each other. However, the lower and upper areas were accessible from the forecourt via side aisles.

The middle part consisted of a self-contained core temple. Its only entrance led from the forecourt into a pillared hall (2), the ceiling of which supported four pillars. Next to the pillared hall was an uncovered sun hall (3), the sides of which were connected to a chapel (4 and 6) and the associated vestibule (5 and 7).