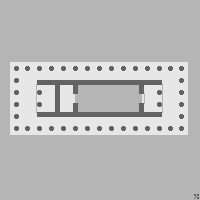 Cella of a peripteros

As a cella ( Latin for 'small room', 'cell') denotes the use of Vitruvius according to the inner main room of an ancient Greek or Roman temple . The cella in which the statue of the gods was placed was regarded as the room of the god and was not generally open to visitors. The central cult act - the sacrifice - did not take place in the cella, but was offered on the altar outside the temple. Somewhat different from this, especially in Sicily (e.g. in Selinunt ) in early Greek temples, up to the early Classical period, a separate room was partitioned off behind the cella in which the statue of the god was placed. It is known as Adyton and was only allowed to be entered by cult personnel. In Greek , the Cella Sekos (Greek Σηκός, pen, “sacred area”) is called.

Mostly without windows, the cella received its natural lighting through the entrance door. In order to support the ceiling and roof construction, it was necessary in larger temples to arrange columns in the cella. While early temples often only had a middle row of columns (e.g. Delos , Naxier-Oikos; Paestum , so-called basilica), two rows of columns usually divided the cella into three aisles, a significantly larger central nave and two narrower aisles. Since the late Archaic period, the pillars in the cella at 'canonical' temples of the Doric order were even carried out for formal reasons if the building was so small that no supports at all would have been required. In contrast to temples of the Ionic order , these column positions in Doric temples were usually arranged on two floors one above the other, so that in the side aisles there were galleries on the upper floor ( Hyperoa ) ( Aphaia temple in Aegina ). Instead of being divided into three longitudinal aisles, the central nave was framed in a U-shape by the side aisles for the first time in the high-class Parthenon in Athens.

In many temples, the cella is slightly raised compared to other components. Instead of the cella, the Hypäthral temples had an inner courtyard, which was called a Sekos.

'Cella' ( garbhagriha ) of a Shiva temple in Pattadakal

Other uses of the word

The few square meters, windowless and exclusively by the Brahmins -Priestern passages used innermost cult chambers ( garbhagriha = "womb chamber") Indian temple , which is always a cult image or Shiva - lingam house, are in archaeological research often called, Cella ' or referred to as 'Sanctum'.