The title of this article is ambiguous. Further meanings are listed under Kötzschenbroda (disambiguation) .

Already in the early modern period with some town charter (1555: Städtlein ), Kötzschenbroda was always the most important settlement in the area of ​​the Loessnitz . As a result of incorporations at the beginning of the 1920s, Kötzschenbroda became a large municipality in 1923 and received city ​​rights in 1924 .

The former town of Kötzschenbroda in the borders before 1935 now forms the urban area of Radebeul-West .

See also : History of viticulture in the Loessnitz

The seal of Kötzschenbroda shows a vine (1598)

Kötzschenbroda was first mentioned in 1226 as Schozebro , where the manor of Zisimo de Schozebro was located . This knight's seat was "at the place of the upper tavern at the highest point on the site", as can be clearly seen there "in the aerial photo by the position of barns". Further mentions were in 1242 as Schosebrode and in 1271 as Coschebrode ( Old Sorbian Skoci brod for "jump over the ford"). Viticulture and horticulture (fruit, asparagus, strawberries) have existed there since the 13th century. In 1273 the church was mentioned, which is said to have originally been dedicated to Saint Vernius, a patron saint of wine. The Dresden Maternihospital owned two vineyards there from 1286. In 1324 the Magnis brothers undertook to deliver half a barrel of their own Kötzschenbrodaer wine (“vinum Kotzbrodensis”) to church institutions in Dresden and Meißen.

In 1429 Kötzschenbroda was robbed and burned down by the Hussites . In 1497 the oldest written preserved arose village Rügen , after its writer the Thanneberger complaints : They kept until then once a year only verbally proclaimed village rules on the " market conformity ", the "free wine room", "freedom, trade and commerce to drive" and the right to “pick wood” and “litter in the forest”, as they were publicly proclaimed that year.

During the Thirty Years' War the place suffered the fate of being robbed and burned down again in 1633, this time by the Swedes. On August 27, 1645 (September 6 after introduced in 1700 in Saxony Gregorian calendar ) was in the rectory of the Church of Peace of the ceasefire Kötzschenbroda between the Kingdom of Sweden and the Electorate of Saxony closed. In 1752 Kötzschenbroda was a market town .

In 1812 Johann Samuel Gottlob Flemming , the local pastor, prevented the sacking of Kötzschenbroda by Napoleonic troops.

The first pharmacy ( Alte Apotheke ) and the first factory ( Laspe'sche clay pipe factory ) were founded in 1826.

Oberkötzschenbroda elementary school , from 1920 also successor to the Lindenau school

The Oberort almost completely encompasses Lindenau , only on the western edge a piece of Naundorf belongs to the border. When, in the second half of the 19th century, this community grew beyond its own municipal boundaries in terms of the number of inhabitants (for which roads were built, along which houses were built), the population of the upper town grew automatically with it. The two municipal neighbors also organized public institutions such as the school together. 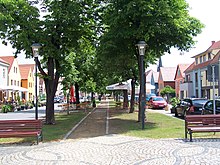 After the construction of the Dresden - Riesa - Leipzig railway line (1839), industry increasingly settled . The first Royal Saxon Postal Expedition opened in 1854 ( Altkötzschenbroda 18 ). In 1865 the town got its own newspaper, the Kötzschenbrodaer Zeitung , which was published until 1943 and also functioned as an official gazette.

In 1876 Fürstenhain was incorporated. The local savings bank was founded in 1887 . On October 12, 1899, Kötzschenbroda got a tram connection to Dresden with the meter-gauge Lößnitzbahn . It ran from the corner of Meißner Strasse and Moritzburger Strasse to the Mickten tram transfer point. The route was extended to Zitzschewig on December 25, 1924, and in 1929/1930 it was retraced to the gauge of the Dresden tram (1450 mm).

Through the incorporation of Lindenau (1920) as well as Zitzschewig , Naundorf and Niederlößnitz (both 1923) Kötzschenbroda was 1,923 greater community and received on 5 May 1924 city law .

The large community with the common name of the previously largest town Kötzschenbroda finally got its own town hall through the merger, the Niederlößnitz town hall located on Rosa-Luxemburg-Platz , in which Niederlößnitz local council, Oswald Hans, who was active from 1904, for the next few years 1929 officiated as mayor . For his 25 years in office, Hans was made an honorary citizen of Kötzschenbroda in 1929 , while he was succeeded in office by the future mayor of Pirna, Wilhelm Brunner .

The merger with Radebeul on January 1, 1935 under the common name Stadt Radebeul took place with the common goal of both cities to avoid a threatened incorporation into Dresden in this way. On April 1, 1935, he was appointed a district-free city ​​district .

From March 2004, the statutes came into force with the formal establishment of the Kötzschenbroda redevelopment area , to which, in addition to Anger Altkötzschenbroda, the Neue Strasse and Vorwerkstrasse belonged in whole or in part to the east, and Kötitzer Strasse, Uferstrasse, An der Festwiese and Elbstrasse in the west. There were also parts of Bahnhofstrasse , Gradsteg , Hermann-Ilgen-Strasse and Auenweg. The redevelopment area was announced in the official gazette of July 2012.

The land acquired on the other side of the Elbe in 1519, later combined with the meadows acquired by Naundorf farmers in 1569 to form the Am Fährhaus district, was ceded to Niederwartha in 1954, among other things because of the destruction of the two Elbe bridges Niederwartha . On the area there was in particular the ramp on the left Elbe for the railway bridge on the Berlin – Dresden railway line and part of the Niederwartha pumped storage plant . The area has belonged to Dresden since 1997.

In the 17th century, a community-owned slaughterhouse, the Communschlächerei , was built at the level of today's Gradsteg across the village green of the village center of Kötzschenbroda . The property, which was demolished again in 1908, also had tapping, baking and lodging rights. The Communschlächerei separated the Anger into an eastern square in front of the church, the market where the weekly markets were held and where the Friedenskirche with the churchyard and the parish as well as the Oberschänke are located.

The actual village green stretched from the slaughterhouse to the shepherd's house , which served as the community shepherd's apartment as well as a poor house . Today's Bahnhofstrasse separated the village center into the larger upper village, in which the three-sided courtyards of the farm owners of the old parish of the “nineties” are lined up at the gable, and beyond Bahnhofstrasse to the west into the lower village. The “nineties” indicates that in Kötzschenbroda ninety landlords, including tavern and church estate owners, were responsible for the community to the landlord.

The historic town center of Kötzschenbroda, which had undergone extensive area redevelopment, took part in the 2001 federal competition for living in historic city centers and town centers . 129 participants entered the competition organized by the German Foundation for Monument Protection under the patronage of the Federal Ministry of Transport, Building and Housing . The city of Radebeul received a silver plaque in 2002 for the “development of Alt-Kötzschenbroda into a local point of identification with a strong regional charisma” (quote from the certificate). 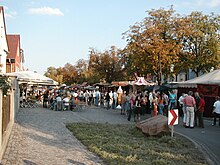 Together with the Karl May Festival in Lößnitzgrund, the autumn and wine festival that takes place every year at the Anger Altkötzschenbroda in conjunction with the traveling theater festival is one of the two major folk festivals in Radebeul.

A specialty of Kötzschenbroda is the Kötzschber . Kötzschber was the name for wine from Kötzschenbroda for centuries. He is mentioned by Martin Luther, who praised him for his kindness in a letter to the Meißner bishop in 1520. Since the Weinbauflur mainly belongs to Niederlößnitz, the Kötzschber von Kötzschenbrodaer Flur only offers a winegrower (Weinhaus Förster) as white wine, red wine and Rotling (Schieler) .

Monument to Chronos and the mourners in the churchyard of the Friedenskirche
See also : List of cultural monuments in Radebeul-Kötzschenbroda

On the eastern side of Moritzburger Straße, north of the Am Wasserturm path, a narrow strip of Kötzschenbroda Oberort, on both sides of the water tower , belongs to the landscape protection area , which, with its drained vineyard walls , was placed under regional monument protection in 1999 as the Radebeul historical vineyard landscape . This stretches from Oberlößnitz in the east via Niederlößnitz and Kötzschenbroda Oberort to Naundorf and Zitzschewig.

As historic preservation collections of objects are in Kötzschenbroda the two cemeteries, the old cemetery and the cemetery Radebeul-West . Both are also considered works of landscape and garden design . These include the large gardens of the also listed Villa Tanger , the Villa Krüger , also known as the Berlin House , and the Hofmann Villa .

The church yard around the Friedenskirche is one of the listed ancillary facilities . On it stands what is probably Radebeul's most important monument, the sandstone sculpture Chronos and the Mourners, or Chronos and Lamenting Woman, restored in 2005 . Also in the churchyard is the tomb of Franz Richard Steche (1837–1893), art historian and architect, the founder of the Saxon inventory. The Kötzschenbroda war memorial stands in front of the churchyard on the Anger . Right next to it are the Luther House and the parsonage , where the armistice was signed by Kötzschenbroda during the Thirty Years' War . A commemorative plaque is set in the ground in front of the gate entrance to the rectory.

At Anger Altkötzschenbroda there are around 40 architectural monuments that are on Radebeul's list of cultural monuments . Am Anger also two of the five historical are brewing taverns goods of Lößnitz that Oberschanke and the Golden Anchor . On the western edge of the Angers, in the former Unterdorf, is the shepherd's house , which also served as a poor house. Another inn is the “Zum Dampfschiff” restaurant at the Kötzschenbrodaer steamship pier .

The last Mayor of Kötzschenbroda, Wilhelm Brunner, briefly became the 2nd Mayor of Radebeul and, after 1935, was appointed Lord Mayor of Pirna. The second mayor from 1932 onwards, councilor Ulrich Thon from Opole, successor to Selmar Prasse, who had already left office in 1930, was subsequently a councilor of Radebeul until he went to Posen as such in 1940.

The municipal council or mayor were:

In 1947, the singers Bully Buhlan and Peter Rebhuhn made the German version of the song Chattanooga Choo Choo , popularized by the Glenn Miller Orchestra , the post-war hit Kötzschenbroda Express ( forgive you, my lord, this train goes to Kötzschenbroda ), the Name of the place known throughout Germany. The title came about because the Berlin – Dresden trains ended in Kötzschenbroda due to bomb damage in the Dresden city area, and the unfamiliar name appeared at Berlin train stations. The Kötzschenbroda station was called Radebeul West until 2013 , but was renamed Radebeul-Kötzschenbroda again after the complete renovation .

Kötzschenbroda is also mentioned as a “Dresden pleasure place” with a “funny” name, when in Theodor Fontane's novel Irrungen, Verrungen the train stopped at the station there.

The Nobel Peace Prize laureate Carl von Ossietzky negated the “rhythm of the cosmopolitan city” and heard “the rattle of Kötzschenbroda at every turn” “in the brew of the big city” Berlin.

“On the road leading to Meissen, especially at the point where the path leads into the town, there is sometimes a big black dog that is now sitting on the railroad, now walking around there. A few days later a fire usually breaks out in the village. "

- Johann Georg Theodor Grasse : based on an oral tradition

Meant is the intersection of Meißner Strasse and Bahnhofstrasse (in the picture below). At that time, the railway for Bahnhofstrasse was not yet tunneled under, but a level crossing, so that the tracks were easy to reach.