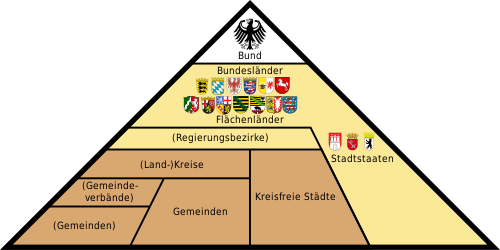 A community association in Germany is the amalgamation of at least two communities to form a corporation under public law with the purpose of performing public tasks on a larger scale within the framework of local self-government while maintaining the independence of the member communities.

In jurisprudence, there is only broad agreement that the districts are to be classified as municipal associations, while the special purpose associations are not included in them because of their limited tasks. The literal interpretation of the term is unproductive because it does not allow the essential characteristics of the term to be determined. It only allows conclusions to be drawn about an association of municipalities - of whatever kind. It is a typical collective term that has remained without fixed outlines even in today's legal language and jurisprudence.

The community association is to be distinguished in particular from such forms of cooperation between communities which as such do not have their own legal personality. An example of this is the public-law agreement in North Rhine-Westphalia or the agreed administrative community between municipalities in Baden-Württemberg .

A further classification arises with regard to the members of a community association:

The tasks of the community association must lie exclusively within the general interest . Community associations do not have their own area of ​​responsibility (local affairs) like communities per se, but rather must be shaped in accordance with the law or the articles of association. Here, community associations usually take on supra-community or supplementary balancing tasks that an individual community cannot fulfill due to its financial and / or administrative power. That is why the establishment of community associations is intended to prevent certain community tasks from failing due to the lack of efficiency of an individual community. These tasks cannot be carried out “optimally” by the municipalities or districts, depending on their design, technical requirements, financial feasibility or historical understanding. The municipal association and the Zweckverband differ in the focus of their tasks. In the municipal association, the tasks are regularly area-related, in the special-purpose association, however, primarily object-related. The tasks are financed by the statutory contributions that are paid by its members.

Municipalities and municipal associations by country

Source of community figures: lists below (as of January 1, 2012)