The title of this article is ambiguous. Further meanings are listed under Salzstrasse (disambiguation) . 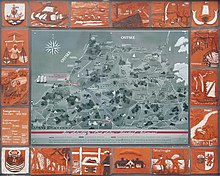 The salt route is the name given to old trade routes on which salt was transported. In the Middle Ages , the transport of goods over long distances was very laborious and expensive. Only noble and particularly sought-after goods such as silver, salt, amber, silk and spices were transported over great distances.

The destinations of long-distance trade were the big cities. The first highways were built between these cities. Since salt was not available everywhere, but was urgently needed for life, salt roads were mainly built between areas without salt and the salt pans and salt mines .

Trade was carried Niederlagsrechte tied to specific locations and distances. The salt had to be "deposited" in certain cities, that is, offered for sale. In addition, these cities also demanded duties and taxes. Since salt was vital, good money could be made with it.

In Germany there are very many "salt roads", "old salt roads" and "salt routes" known. The Hellweg is also a former Salt Road. Medieval salt roads are mostly known in their exact course. But before that, in the early Middle Ages and especially in pre-Roman times, there was salt mining and other forms of salt production in various places, and with it, to a certain extent, salt trade. These old routes can sometimes be reconstructed as prehistoric trade routes from finds of goods, but only partially traced in the landscape.

The term Via Salina was recently chosen according to the naming scheme of the old Roman roads - a historical street name from Roman times is not known. However, he is z. B. occasionally used for the semi-professional search for clues on appropriate paths and in the name of the so-called Euregio via salina with the aim of promoting the region, primarily in a tourist manner.

From the Halle saltworks in Halle (Saale) trade routes stretched on all sides. Some of these traffic arteries are still recognizable today as motorways, federal highways or railway lines. Other roads that were important in the past have become meaningless for long-distance trade and are now only narrow hiking trails. Some sections of the route still bear the name "Salt Road" today. The following routes were important salt roads in Halle in the Middle Ages:

Monument of the Saxon Salt Road in Zschopau, inscription "Zschap mei Geeß" (Zschopau mein Jesus), gratitude of the carters for having overcome the Ore Mountains and reached the ford of Zschopau.

Course of the salt road between Halle and Prague via Oederan-Sayda-Seiffen-Most / Brüx.

In Saxony there were several so-called Bohemian Steige (Česká stezka in Czech) before the ore foothills and the Ore Mountains were settled . The majority of these trade routes led from the salt pans near Halle to the south-east and south through Saxony. They crossed the Ore Mountains over various Ore Mountain passes and connected Saxony with Bohemia. Because of the large amount of goods transported, salt, they were also called the Salt Road.

One of these connections ran from Leipzig via Oederan , Sayda and Brüx (Most) to Prague . A touristic development of this salt road by the association "Alte Salzstraße Halle - Prag" founded on July 17th, 2010 in Halle is planned in the medium term.

Another of these Saxon salt roads led from Halle via Leipzig, Chemnitz (see also B 174 ), Zschopau , Marienberg , Reitzenhain and Komotau to Prague.

An "old salt road" in Vogtland is also known . Starting from the salt pans near Halle, it led following the river Weisse Elster via Elsterberg , Schönbach , Steinsdorf , Plauen , Trogen to Hof . 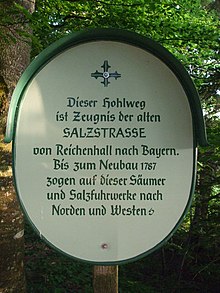 From Bad Reichenhall by ship on the Salzach and Inn to Passau and on via the " Goldenen Steig " to Bohemia .

An important, if not yet scientifically researched, route is the “ Böhmweg ” from Deggendorf via Regen , Zwiesel , Lindberg , Prašily / Stubenbach, Dobrá Voda / Gutwasser, Hartmanitz / Hartmanice , to Schüttenhofen / Sušice . It is the oldest path attested in an imperial charter from January 1, 1029: “Strata que in Bavariam tendit - The road that leads to Bavaria”. So it is actually called “Bayerstraße” - but if you go from Bohemia to Bavaria, it is the “Böhmweg”. The further route to Bayerisch Eisenstein has nothing to do with the historical route, because today's border town has only been settled since the late 16th century. "The" Böhmweg does not exist in the historical development. Rather, there is a whole bundle of paths, some of which are about 5 kilometers in length. An old route began in Seebach near Niederalteich , where the Isarhochweg crossed the Danube (see Isarhofen, Isargmünd), since the Isar originally ran here. Then there are several routes that headed from the Geiersberg Church near Deggendorf and from the city center via Haslach , Parst to the Ruselabsatz . The “Böhmweg”, which is used for tourism today, leads via Greising, Bischofsmais , Regen, Schweinhütt to Zwiesel; it is attested in the 18th century.

The "path that Gunther [von Niederaltaich] recently laid out" mentioned in the document from 1029 is now offered as the "Gunthersteig" as a hiking trail. It led from Niederaltaich over the Lallinger Winkel to Rinchnach and then turned into the old “Böhmweg” before Zwiesel. The route Niederaltaich - Rinchnach - Zwiesel - Böhmen (to Prague!) Offered today is only historical as far as Zwiesel. When the Bavarian duke took over the salt trade from the Passau “Golden Steigen” in the second half of the 16th century, a salt road ran from Vilshofen via Schönberg , the sunny forest area, Hangerleithen and Regen to Bohemia. Like the Böhmweg and the Gunthersteig, this path has not yet been scientifically researched.

A medieval salt road led from Bad Reichenhall via Munich and Landsberg am Lech to Lake Constance .

This " old salt road " leads from Lüneburg to Lübeck and is now signposted as a holiday route .

One street in Thuringia that used to be mainly used to transport salt is Salzmannstraße . Another salt road led from the Werra near Bad Salzungen to Erfurt .

In Münster there is the Salzstraße in today's inner city . An old salt path from Saline Königsborn runs south of Hattingen near the town of Holthausen in an east-west direction from Unna to the Rhineland. The street still bears this name today.

From Schwäbisch Hall in what is now northeastern Baden-Württemberg , where salt has been extracted in a saline since at least the 11th century, at least three salt roads went out.

In 1772 the Maritime Trading Society was founded under Frederick the Great, which imported rock salt to Silesia . Royal salt offices were established in Brieg , Schweidnitz , Cosel , Rabitor , Neusalz , Glogau , Sagan , Bunzlau and Liegnitz , among others .

The Old Salt Road in Lower Silesia began in Neusalz at Umschlagkai. The rock salt was transported from Stettin up the Oder to Silesia and then distributed and traded on the Old Salt Road by carts south (to Bohemia).

The Linzer Steig is a medieval network of mule tracks that led from the Linz salt storage area to Bohemia . In the 19th century, the Budweis – Linz – Gmunden horse-drawn railway took over the function of the Linzer Steig.

It led from Hall in Tirol through the Ausserfern over the Oberjochpass into the Allgäu and there via Immenstadt in the Allgäu and Simmerberg to Buchhorn near Friedrichshafen on Lake Constance , from where the salt was shipped to Switzerland. In 1771 Buchhorn lost its monopoly and Lindau became the preferred salt trading point.

It is the older of the two salt roads that connected the mining areas around Berchtesgaden and Hall in Tirol with Lake Constance. In the western part it led over the area ruled by the Bishop of Kempten (Kempten – Isny ​​– Wohmbrechts). The economic advantages of the transport monopoly prompted the Duke of Tyrol to set up the above-mentioned upper trade route variant on mostly own territory.

This led from Hall in Tirol via the municipalities of Ampass , Aldrans , Lans , Patsch , Ellbögen and Pfons on the eastern side of the Wipptal to Matrei am Brenner and was the shortest way to bring the salt to Italy at that time. Today Ellbögener Straße  (L 38) follows its course .

'Route du Sel' through the Royatal