Ampass is a municipality with 1845 inhabitants (as of January 1, 2020) in the Innsbruck-Land district of the state of Tyrol in Austria . The municipality is located in the judicial district of Hall in Tirol .

Ampass is located southeast of Innsbruck in the southeast low mountain range . In the north the border runs on the Inn , in the west Ampass borders directly on Innsbruck, which is about 8 kilometers away. The village center is located in a kind of valley basin.

Ampass as a community is divided in a cadastral and Zählsprengel . The associated districts are:

Prehistoric finds testify to an early settlement, the oldest among them date from the 15th century BC. The Iron Age sanctuary at Demlfeld brought particularly rich finds .

Ampass is located on the old salt road from Hall to Matrei , east of Innsbruck on the south bank of the Inn , on which the salt extracted in the Hall valley was transported south. This path is likely to date back to at least Roman times, a side route Hall - Häuser - Patsch of Brennerstrasse should have run here. A 1.9 meter high granite milestone built in 1254 is said to have marked the boundary to the Wilten parish and is still in its original location. The salt transports reached their peak around 1490. Today the course of the Salzstraße is followed by the Ellbögener Straße (L 38).

Ampass is first mentioned in a document in 1145 as Ampans or Ambans (in a document from Wilten Abbey, however, which was not made until the 14th century ), then with Pastor Eberhard ( Eberhardus plebanus de Ambans ) in 1157/68. The name should be pre-Romanesque and mean in Celtic 'between two streams'. As an independent municipality, Ampass is first mentioned in 1312 in the Inntaler tax book.

Battles in the Tyrolean freedom struggle in 1809 also took place in Ampass , Kaspar Sautner was Ampasser. A hiking trail around Ampass is named after him.

Ampass was exposed to population decline from the middle of the 19th century to 1910, but like many other municipalities in the area around Innsbruck it has developed from an agricultural town to a residential municipality in recent decades and has experienced an increase in population in recent years.

Blazon : In green a silver pole with a black quarter column.

The municipal coat of arms, awarded in 1974, shows the quarter column , a plague column , as the town's landmark. The silver stake represents the salt road that led through Ampass.

Ampass has a sports field, a beach volleyball court and, in winter, an ice rink.

In addition, some paths, especially in the Zimmertal , Peerhöfe and Ebenwald areas , are used as hiking routes and are considered Innsbruck's local recreation area.

Parish Church of John the Baptist

The Rosenberger restaurant was closed in January 2019 - in the restructuring process without self-administration since December 2018.

The Ampasser landmark is the plague column , also called the quarter column , which can also be seen on the coat of arms.

Parish Church of John the Baptist 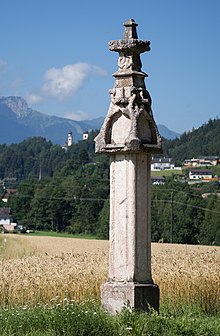 The parish church includes a church building and a bell tower at the top of the Kirchbühel. In 1739 the bell, which was too heavy for the normal church tower, was housed in that tower.

Around 1000 there is said to have been an unknown castle on the Kirchbühel. According to documents, the castle chapel built by King Heinrich IV , which was later elevated to capella regalis (royal chapel), was inaugurated by Bishop Altwin von Brixen between 1048 and 1097 . The resulting late Gothic parish church was later redesigned in Baroque style . In the past it has often seen widespread destruction, such as a fire, destruction by troops in the Thirty Years' War and by a major earthquake in 1698.

Due to its exceptional location and uniqueness, St. John's Church is very popular today as a wedding church.

The Gothic St. Vitus Church, built by carters, was mentioned for the first time in 1429. This can still be seen today in the church's intercession by the carters.

The Ampasser landmark, the quarter column, also known as the plague column, is one of the most important Gothic wayside shrines in North Tyrol. It is said to come from the first half of the 16th century and is located near the Sonnenbühel . After an act of vandalism in 1876, the quarter column was renovated, followed by two more restorations in 1970 and 1997.