The title of this article is ambiguous. For the founder of Lebenshilfe, see Tom Mutters . 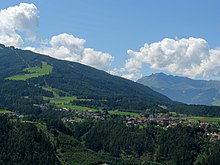 Mother from the east

Mutters is a municipality with 2231 inhabitants (as of January 1, 2020) in the Innsbruck-Land district in Tyrol ( Austria ). It is located southwest of Innsbruck on a low mountain range at the entrance to the Stubai Valley together with the neighboring community of Natters in the Innsbruck judicial district .

The community consists of the cadastral communities Kreith and Mutters.

The village center is well preserved in its village-rural character. Due to the proximity to the provincial capital Innsbruck, there was lively settlement activity.

The area around Mutters was probably already in the Neolithic around 3000 BC. Settled. The first urn finds are documented from the Bronze Age. At the turn of the year 1115/16, " Muttres " was first mentioned in a document (in the tradition book of the Ebersberg monastery ); the name is probably derived from the Rhaeto-Romanic mutt "hill".

In 1727 part of the village fell victim to a fire. The population was badly affected by the Napoleonic Wars in 1796/1797 and 1809. Andreas Hofer set up his headquarters at the “ Schupfenwirt ” on Brennerstrasse during the battles on Bergisel in May and August 1809.

Kurt Schuschnigg , Federal Chancellor in the Austrian corporate state , lived in the community until his death in 1977, of which he is still an honorary citizen.

For around 200 years, the village patron St. Nicholas has been celebrated on his name day with the "Bumsa-Schiaßn".

It is also customary for residents of the neighboring municipality of Natters to try to steal the cannon used for this purpose . For this they have exactly 24 hours from December 5th, 12 noon, during which the cannon is of course guarded accordingly. In 2010 the cannon disappeared about twelve hours before this traditional time frame, which is why the mayor gave the stolen a 90-minute ultimatum to return it, which passed unsuccessfully and called the police for help. The cannon reappeared.

The Bumsa cannon is like a wooden barrel made of staves and ten tires, which is four meters long and conically widened from 40 to 140 centimeters in diameter and placed on two pegs on the mountain. The barrel of an old Tyrolean muzzle-loader , which is fired several times on December 6th from five o'clock and thanks to the cannon, "bangs" loudly, fits into the mouth hole of the end wall at the narrow end .

Tourism plays an important role in Mutters (summer tourism predominates), and there is also a newly created industrial park in Gärberbach.

As early as 1904, the place was connected to the Stubai Valley Railway , which opens up the municipality with 6 stops. Mutters can also be reached from Innsbruck via the Brenner federal road.

In 1953 the Muttereralmbahn was built, which was in operation until 2000 and reopened in January 2006 after a new building. This leads to the ski area of ​​the Mutterer Alm . There was also the Götzner Grube drag lift as a connection to the Muttereralmbahn. The drag lift was recently reactivated. A direct chairlift ( Birgitzbahn , 4-seater high-speed railway detachable) over the Birgitzköpfl is currently - after long negotiations - in concrete planning.

The community is a member of the Tyrol Climate Alliance

Peer Hansjörg was elected mayor and Reitmair Gregor was elected deputy mayor. Both belong to the party Wir Mutterer with BM Hansjörg PEER .

The distribution of seats in the municipal council

Members of the parish council

Blazon : A green tip in gold, in it three golden balls one to two over a golden book.

The municipal coat of arms was awarded on November 30, 1983. The tip in the coat of arms symbolizes the Saile (Nockspitze). The book and the three spheres, St. Nicholas' emblems, commemorate the church patron of the Mutters parish (December 6th). The colors of the municipality flag are yellow-green.