Neustift in the Stubai Valley

Neustift im Stubaital is a municipality with 4811 inhabitants (as of January 1, 2020) in the Innsbruck-Land district in Tyrol ( Austria ).

Neustift is the third largest municipality in Tyrol (after Sölden and Matrei in East Tyrol ) and one of the most important tourist centers in Austria with over 1 million overnight stays per year. A landmark that can be recognized from afar is the parish church of St. George, Tyrol's second largest village church, in addition to the snow-covered glacier mountains.

Neustift is located approx. 25 km south of the provincial capital Innsbruck and is the furthest of the five communities in the Stubai Valley . Massive limestone massifs rise at the entrance to the valley. In the back valley, in the Neustift municipality area, the gneiss and granite peaks with 109 three-thousanders rise up to the eternal ice. Five glaciers (in the west of Tyrol also known as Ferner ) form a large glacier ski area, the Stubai Glacier , over 15 square kilometers .

The community consists of only one cadastral community (Neustift) and one village (Neustift im Stubaital) .

The community is divided into three valleys with the following locations:

The municipality is located in the judicial district of Innsbruck .

Prehistoric finds from the early Bronze Age (around 1800–1000 BC) show that the valley was inhabited since ancient times. Some fields, alpine pastures and house names indicate pre-Roman settlement.

When Emperor Augustus with his legions 15 BC BC advanced to the north, the mountain people living here and their area were subjugated as the province of Raetia. In the following, the Romans left their traces through their administration and later through Christianization , as well as the many Rhaeto-Romanic field names and the family names derived from them:

The lack of early German place names shows the largely peaceful Bauwar conquest of the 7th and 8th centuries, with a simultaneous long sovereignty of the Rhaeto-Romanic population, as is characteristic of mining areas in the Alpine region with the local expertise of the residents. Hermann Ignaz Bidermann reported in 1877 that, according to tradition, the German-speaking population in the front valley area could not communicate with the Rhaeto-Romanic Stubai people in the rear valley area in the High Middle Ages. Until the 16th century, at least parts of the population in the rear part of the Stubai were Ladins or spoke Romansh. 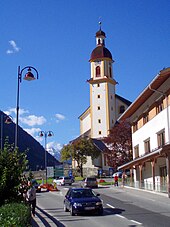 View to the parish church of St. George

Around 993–1005 the Stubai Valley was first mentioned as Stupeia , around 1400 the large community of Stubai was divided into five small communities: Telfes, Schönberg, Mieders, Fulpmes and “im Tal”. Although the name Neustift appears in documents from the 14th century as Niwenstift in the valley ze Stubai , it took centuries for the current name Neustift to establish itself alongside the place name in the valley . "The Tholer" ("valley people"), that's how the residents of Neustift are still called today. The community “in the valley” comprised 5 bars (neighborhoods): Neder, Rain (where today's Neustift later developed around the church), Milders, Oberberg and Unterberg .

King Maximilian I , who called himself the “chosen emperor” from 1508, was hunting deer, chamois and boar in the rear of the Stubai Valley. In 1505 he donated a chapel, but it was not until 1868 that the people of Neustift received their own pastor.

In 1516 the first church in Neustift was built by the Brixen bishop St. George consecrated. In 1772 it fell victim to a conflagration. In 1768 the construction of today's church had already begun, as the original one had already become too small. The pastor Franz de Paula Penz was the builder of the impressive Neustift village church. He was one of the most ingenious church builders of the late baroque in Tyrol.

In 1812 Neustift became an independent parish. From the outside, the church of St. Georg, a rococo building in the center of the village, very simple, but the interior is very splendid and decorated with frescoes by well-known masters. The parish church in Neustift is Tyrol's second largest village church. The “Glacier Pastor” and co-founder of the Alpine Club Franz Senn is buried in the beautiful cemetery .

During the Second World War, the SS had a high mountain school in Neustift, where prisoners from the Dachau concentration camp were also used for work.

The parameter Sitzeis outdated and superfluous!

The community is part of the Tyrolean Planning Association Stubaital and the Stubai Tirol tourist region . The seat community of the planning association is Schönberg , chairman of the mayor, Hermann Steixner. The tourist office is based in the Stubaitalhaus in Neustift.

Capital of the municipality

The main town of the municipality is the village of Neustift in the Stubai Valley . It is located about 20 kilometers as the crow flies southeast of Innsbruck city ​​center . It lies at around 990  m above sea level. A. Height in the valley floor of the rear Stubai valley on the left of the Ruetz .

The place with its direct neighbors (the counting district Neustift-Dorf ) comprises about 450 buildings with almost 1900 inhabitants, that is about 2 ⁄ 5 of the community population.

Neustift is a younger church village that only became the central place of the community over time.

Neustift is connected to Innsbruck and the other towns in the Stubai Valley by bus lines 590 and 590N (both IVB ). There were also plans to extend the STB Stubai Valley Railway to Neustift, but these were closed. The community is also connected to the state road 183 as far as Neustift .

The main branch of industry is tourism with the glacier ski area Stubai Glacier and the entire Stubai Tirol association . Together with the facilities in the other three ski areas ( Elfer-Lifte , Schlick 2000 and Serles-Lifte ) there are 42 cable cars and lifts across the valley.

Daughters and sons of the church

The community structure of Neustift in the Stubaital