from Wikipedia, the free encyclopedia
This is the spotted version , flagged on March 5, 2020 . There is 1 pending change that has yet to be viewed.

The historic municipal office of Fiè 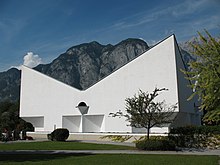 The listed Emmauskirche stands in stark contrast to the landscape

The old parish church to the Hll. Jodok and Lucia

Völs is a market town with 6938 inhabitants (as of January 1, 2020) in the state of Tyrol in Austria . The municipality is located in the judicial district of Innsbruck .

Fie is, inter alia, over the line

the train Tirol connected to the capital.

The oldest evidence of settlement are stone ax finds from the 3rd millennium BC. Coin finds and the Völser Bacchus , a ten centimeter high, 1.38 kilogram bust, which served as the sliding weight of a speed scale, date from the Roman period . This find from the 1st century AD is considered to be one of the most important finds of its kind in Tyrol.

The first written records come from the years 1183/88, when a "Heinricus de Velles" is mentioned in the tradition book of Benediktbeuern Monastery , which the more recent literature refers to Völs with reservations. In 1312 Völs became a tax municipality.

The last municipal council election in 2016 saw the following results:

Blazon : In silver, a red, gold-bridled horse growing from the lower edge of the shield .

The most important features in Völs include the “Völser Badl” outdoor pool and the “ Cyta ” shopping center . Most of the events take place in the "Blaike" event center and in "Vereinshaus 1". As a shopping and residential suburb, Völs is directly adjacent to Innsbruck.

The Völsersee settlement is next to the Olympic Village in Innsbruck one of the most densely populated settlement areas in the Innsbruck metropolitan area and is not far from the approach path of Innsbruck airport. Nevertheless, the quality of living is good, as the daily distances in particular are short and a good range of leisure activities is available in the area. During the construction of this settlement, Völs promoted the installation of electrical heating systems to avoid increased emissions.

The historical "Völser See" was in the west of the village. It was artificially created in the 15th century, had an area of ​​about 30 hectares and was used for hunting and fishing . The lake was abandoned around 1800 and is silted up today. Plans to build a new “Völser See” in the first half of the 20th century were not implemented. Today the much smaller “Völser Teich”, built in 1983, is used for local recreation for the population and as a habitat for many animal and plant species.

Although Völs is inhabited by many commuters who work in Innsbruck , many trading companies have set up shop in the Völs industrial park, especially in the area of ​​the Cyta . The Cyta represents the counterpart to the DEZ shopping center in the east of Innsbruck, even if it has had competition with the West shopping center in Hötting . In addition, the MPreis headquarters are a large company based in Völs.

Völs is home to many sports clubs such as the local football club SV Völs. In addition to the "first", the combat team, there are also various junior teams. The sports field in Völs is well equipped with a grass field, an artificial turf field , an athletics track , a basketball court and a recently built beach volleyball court . In winter, the artificial turf field is converted into an ice rink . There is also a free skate park not far from the sports field .