Gries on the burner 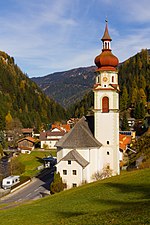 View to the church in Gries

The border community to South Tyrol ( Italy ) is located on the Brenner Pass in the North Tyrolean part of the Wipptal . The place forms a clustered village that is surrounded by further hamlets and individual farms. The southern district of Lueg was a customs post in the Middle Ages.

The districts of Gries am Brenner are:

Since Roman times, Gries has been an important stop in front of the pass on the way south. Many well-known historical personalities stopped here on their way across the Alps, such as Charlemagne , Albrecht Dürer , Johann Wolfgang von Goethe and Wolfgang Amadeus Mozart . Since the completion of the Brenner motorway , the transit traffic no longer runs through the village, and Gries has become a rather quiet holiday resort without mass tourism. Some of the street inns have existed here for centuries.

Karl Mühlsteiger was elected mayor in the first ballot (with 62.31%).

Blazon : On a gold shield three black, triple-tinned, adjoining towers, two in the upper half, one in the middle of the lower half of the shield.

The municipal coat of arms, awarded in 1973, symbolizes the three towers of the fortifications on the Lueg , which are important for securing the Brennerstraße, with the outworks on the Schloßögg and Morhäusl, and thus illustrates the important role played by the Brenner traffic for Gries. At the same time, the number reminds of the three Riegate Nösslach, Ritten and Vinaders, which were merged to form the municipality of Gries in 1811.

See also:  List of listed objects in Gries am Brenner

The Brenner Mountains are popular as a ski touring and hiking area. On the 2115  m high Grenzberg Sattelberg there was a ski area near the Sattelbergalm . The lift operation was stopped in 2006. In summer, hiking is more on the agenda, and farm holidays are also on offer. And the responsible tourism association Wipptal advertises with mountain biking.

Community structure of Gries am Brenner