Kolsass is a municipality with 1618 inhabitants (as of January 1, 2020) in the Innsbruck-Land district in Tyrol ( Austria ). In 2003 over 10,000 overnight stays were recorded in tourism. The municipality is located in the judicial district of Hall in Tirol .

Kolsass is located in the Lower Inn Valley at 553  m above sea level. A. Höhe south of the Inn between Innsbruck and the Zillertal on Tiroler Straße B 171. The municipality covers 3.34 km².

The community consists of a single village or cadastral community of the same name .

The parish of the Visitation of Mary in Kolsass was probably founded in pre-Carolingian times, as it was elevated to a mother parish in 788 . The present town has emerged from two old settlements (village with church and village Mühlbach) and in the years 1050-1065 in a traditional note of the Bishopric of Brixen first documentary known as "Quolesaz".

The place name is obviously composed of the two Rhaeto-Romanic ( Ladin ) words Col (hill) and Sass (rock). This could refer to the castle hill of Rettenberg Castle, whose settlement dates back to the Iron Age .

In the course of the reallocation of the Tyrolean administrative districts, Kolsass and the Kolsassberg community became part of the Schwaz district on October 15, 1938, but returned to the Innsbruck-Land district on January 1, 1948. 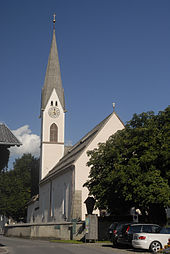 Catholic parish church of the Visitation of the Virgin Mary
See also:  List of listed objects in Kolsass