The title of this article is ambiguous. Further meanings are listed under Rinn (disambiguation) . 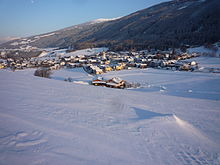 General view of the "Teufelsmühle" between Rinn and Aldrans

Rinn is a municipality with 1939 inhabitants (as of January 1, 2020) in the Innsbruck-Land district of the state of Tyrol ( Austria ). The municipality is located in the judicial district of Hall in Tirol .

The name is first recorded as a runne in 1250 . Possibly the name goes back to the Romansh word Run for ' clearing site ' (clearing for settlement areas in the low mountain range). The name is still occasionally interpreted as a running or water pipe.

Rinn is 918  m above sea level. A.  in the south-eastern low mountain range east of Innsbruck .

The community consists of the two clustered villages Rinn (located on the state road) and Judenstein (north of Rinn) as well as other isolated hamlets and farms.

The last mayoral elections took place at the same time as the municipal council elections on February 28, 2016. Since none of the four candidates who stood could achieve an absolute majority, there was a runoff election on March 13th against Herbert Schafferer (Together for Rinn) and Armin Eberl (Pro Rinn). Herbert Schafferer was able to prevail clearly against Armin Eberl in the second ballot and has been the new mayor of Rinn ever since.

At the constituent meeting on March 18, 2016, Armin Eberl was elected Vice Mayor.

The Judenstein pilgrimage church was built in 1670. Legend has it that on the Judenstein (in the common name “that” is used more as an article) Anderl von Rinn (Andreas Oxner) was slain by Jews traveling through. This anti-Semitic ritual murder legend made Judenstein a place of pilgrimage . However, the allegations are unproven and baseless. In 1994, the then Innsbruck Bishop Reinhold Stecher canceled the pilgrimage . Today Judenstein is a general memorial for abused children and young people, as evidenced by a plaque in the Judenstein church.

An annual highlight in Rinn's cultural and event offerings is the RollRinn event, which has been taking place since 2000 . The RollRinn association wants to use the connecting and integrative power of the village community to help break down the barriers between disabled and non-disabled people. Furthermore, through optimal organization, he wants to offer the athletes of the Austria Ski Team a professional stage in disabled sports so that they can present their sport to a broader public. RollRinn has meanwhile become a major event that annually attracts Austrian and international top athletes and celebrities to promote a good cause.

As part of the Special Olympics 2008, the cross-country skiing competitions were to be held in Rinn . Due to the hurricane and the associated lack of snow, however, these were relocated to Leutasch .

Agriculture still plays a certain role in Rinn, but it has also become a popular community for young families with children due to the lack of larger farms and significant tourist development. The provincial capital Innsbruck is only 15 minutes away by car and can also be easily reached by bus.