With almost two million overnight stays per year and 15,000 guest beds, Sölden is an important tourist area, mainly for winter sports. The former character of a mountain farming village, which was dominant in the whole of Ötztal until the second half of the 20th century, was lost and was replaced by a tourist-alpine architectural style.

With 468 km² Sölden is the largest municipality in Austria in terms of area . The municipality extends from the green expanse of the fourth Ötztal level to the high watershed in the south, which forms the state border with Italy ( South Tyrol ). 146 km² are covered by glaciers, 321 km² by peaks, alpine pastures and forests, and only about 1 km² are built-up areas.

The municipality includes the following five localities (residents as of January 1, 2020):

Five of the nine neighboring municipalities are in South Tyrol, two in the Imst district and one each in the Innsbruck-Land and Landeck districts.

Localities of the municipality

Sölden in the Ötztal

View of the center of Sölden

The formerly small Sölden has grown together with the other hamlets to form a street village, with hotels , restaurants and pensions here also being the tourist center of the community.

The cable car to the Gaislachkogel starts in the south of Sölden up to an altitude of 3,058  m . The 13 km long Ötztaler Gletscherstraße branches off from the Pitze district of Mercen to the Rettenbachferner ski areas and via the highest tunnel in the Alps to the Tiefenbachferner.

At the end of the Gurgler Valley lies Obergurgl , at 1930  m Austria's highest church village and, like the Hochgurgl hotel complex , an important winter sports area (altitude of the ski area from 1800  m to 3080  m ). Obergurgl is the location of the University Center Obergurgl, a conference and event center of the University of Innsbruck .

The emergency landing of the stratospheric balloon of the Swiss physicist and researcher Auguste Piccard on May 27, 1931 on the Gurgler Ferner made Obergurgl more famous . In honor of Piccard, a memorial was erected in Obergurgl in 1989 to commemorate this landing.

Hochgurgl at 2150  m above sea level is a hotel complex on the road to Timmelsjoch . The Hochgurgl ski area is connected to that in Obergurgl by a cable car. From the highest point of the ski area, the 3,082  m high Wurmkogel , you have a comprehensive view of the mountains of North and South Tyrol.

Heiligkreuz at 1712  m above sea level A. consists of several groups of houses spread over 8 km in the Venter Valley . Since 1956 the road connection to Vent has been continuously expanded and secured with avalanche protection galleries. In contrast to the other districts of Sölden, Heiligkreuz is not very touristy.

The district of Vent is at an altitude of 1895  m above sea level. A. at the end of the Vent Valley.

At Zwieselstein , the rear Ötztal divides into the Venter and Gurgler valley . This place has partly preserved its village character with old wooden houses. Zwieselstein was first mentioned in a document as Twiselsteyn in 1269. The place is also known as a stage destination of the European long-distance hiking trail E5, which was opened in 1972 .

Postcard from Sölden with Berghof (around 1920) 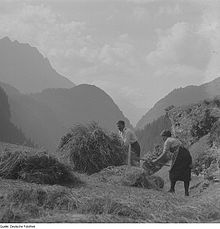 The high alpine pastures of the rearmost Innerötztal were visited by hunters and shepherds as early as the Stone Age, as the discovery of Ötzi showed. They came from the south over the main Alpine ridge and began around 4500 BC. To enlarge the usable pastureland by slash and burn at the tree line. The Innerötztal was originally only used as an alpine pasture from the Vinschgau . The gradual settlement activity from the south shaped numerous Rhaeto-Romanic place names, especially in the Venter Valley , and Romanesque expressions have been preserved in the Innerötztal dialect to this day.

The place name Sölden is derived from "selda", which means something like the smallest farm size. Sölden is mentioned for the first time in 1166/67 in the chronicle of the Ottobeuren monastery as "Seldon", when two Schwaigen were bequeathed to the monastery . In the course of the labialization , the “e” in the word Sölden later changed to an “ö”.

Until the gradual beginning of tourism, the livelihood of the residents was mainly cattle breeding and trade via the Timmelsjoch and the Hochjoch.

Sölden, Gurgl and Vent were raised to independent parishes in 1891.

In the middle of the 19th century, the building of shelters and paths, supported by the "Glacier Pastor" Franz Senn , led to the first tourist development. The expansion into a winter sports center began in 1948 with the first lifts, which were followed by the Rettenbach and Tiefenbach glacier in 1975 and 1981.

On September 5, 2005 at around 1 p.m., a helicopter flew over the Schwarze-Schneid 1 cable car, which was in operation, when metal abrasion particles triggered a short circuit in the load-shedding switch of the aircraft, which opened the load hook and a 750-kilogram concrete bucket dropped a fully occupied gondola when it fell met and crashed. The rope vibrations caused several people to be thrown out of two other gondolas, so that a total of three adults and six children were killed in the accident and seven other people were injured, some seriously. Thomas Dreßen's father and David Ketterer's brother were among those killed .

Tourism, especially winter tourism, is the dominant economic factor in the municipality of Sölden. Until the 1970s, summer tourism played an equally important role alongside winter tourism; with the development of the glaciers and the subsequent expansion of the winter ski area, summer increasingly lost its importance. An exception to this is the mountaineering village of Vent, which belongs to the municipality of Sölden , and where summer tourism continues to play an important role. Since the turn of the millennium, attempts have also been made in Sölden and Obergurgl to revive the waning summer tourism. Other important economic factors are some craft and service companies, which, however, are mostly directly dependent on winter tourism.

Grotesque fight against the self-caused global warming: A slope on the Rettenbachferner will be covered with white rags in summer 2020.

The Sölden ski area, which also includes two glaciers ( Rettenbachferner and Tiefenbachferner ), has 39 cable cars and 146 kilometers of slopes. The main part of the ski area is located at an altitude of over 2,000 m and in three places reaches a height of over 3,000 m (BIG 3). The highest point that can be reached by lift is at an altitude of 3,250 m.

In 2010, the 17 meter deep, 416,500 m³ “Panoramasee”, the largest artificial reservoir in Tyrol for snow-making systems, was put into operation.

Tourist infrastructure at a glance (Sölden):

Tourist infrastructure at a glance (Vent):

Venter Höhenweg from Gaislachkogel towards Vent

Summer tourism in Sölden is mainly characterized by mountain hiking and high alpine mountaineering. In addition to the numerous alpine pastures, there are 16 high alpine huts , most of which belong to sections of the German Alpine Club .

Touristic infrastructure at a glance:

The TIWAG plans to obtain water for the expansion of Gepatschspeicher previously untreated torrents Venter Ache , Gurgler Ache to dam and the Ferwall- and the king Bach in Obergurgl and dissipate. The WWF rated the project based on the criteria catalog of the Federal Environment Ministry as "ecologically devastating" and several environmental organizations pointed out that according to the law, the water management framework plan submitted by TIWAG should only aim at the protection and rehabilitation of rivers, but not at their use for energy purposes .

The mayor's office is held by Ernst Georg Schöpf from the "List with Ernst Schöpf".

“In a shield split by silver and red, a Gothic church on the split line in confused colors with the tower in the silver field. From the upper edge two overturned red and silver half-tips, each with a church in mixed up colors. "

The three churches in the coat of arms awarded in 1960 represent the three parishes of the community (Sölden, Gurgl, Vent). The notches in the background are a symbol of the prehistoric crossings ( passages ) to South Tyrol .

Cities and municipalities in the Imst district