The title of this article is ambiguous. Further meanings are listed under Roppen (disambiguation) .

Roppen is an Austrian municipality in the Imst district ( Silz judicial district ) in Tyrol with 1818 inhabitants (as of January 1, 2020).

Roppen is 5 km southeast of the town of Imst between the mouths of the Pitze and the Ötztaler Ache in the Inn .

The village name was first mentioned in 1260 as "Roupen", but settlement began around 3,000 years ago, as finds in the area of ​​the "Burschl" prove. Already in 1337 a "Lienhardskirche" was mentioned in Roppen, which was looked after from Imst, from 1534 to 1745 the chaplain in Karres was responsible for the community. In 1745 Roppen received its own curate and has only been its own parish since then. 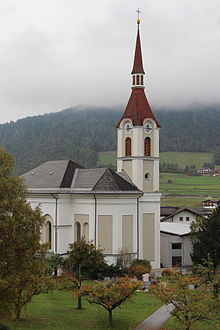 Due to its sunny location and pleasant climatic conditions, Roppen is known for its orchards, in which old apple varieties, pears, stone fruits and even grapes thrive. The metal and industrial sectors are important sectors.

The proximity to the large ski areas in the Ötztal and Pitztal, as well as their central location in the white water and rafting area Imster Gorge, ensure that tourism is an important driving force in the Inntal community. The summer leisure area "Area 47", which was opened in 2010 and is largely located in the Roppen municipality, is intended to further boost regional summer tourism.

The last mayoral elections took place at the same time as the municipal council elections on March 14, 2010. The incumbent mayor Ingobert Mayr received 80% of the votes.

The municipal council has 13 members. Of these, 5 belong to the SPÖ , 3 to the list Together for Roppen , 3 to the Roppen People's Party and one each to the Peter Prantl and Junge Aktive lists

The community board consists of Mayor Ingobert Mayr and Johanna Schöpf from the SPÖ, Vice Mayor Günter Neururer and Stefan Rauch from the list Together for Roppen and Barbara Gstrein from the Roppen People's Party.

Cities and municipalities in the Imst district