The Franzisco-Josephinische Landesaufnahme or Third Landesaufnahme is a set of maps of the Austro-Hungarian monarchy of the 1870s – 1880s. It is named after Emperor and King Franz Joseph I and was carried out by the Reich Ministry of War . It was the third major mapping project of the Habsburg Monarchy after the Josephine land survey of the 1760s – 80s (Joseph II) and the Franziszeische land survey of the 1810s – 50s (Franz I) .

It consists of 2,780 colored record sheets that were distributed to their successor states after the end of the monarchy in 1918, and 752 sheets of the special map and derived map series, which are accessible in archives and partly online. 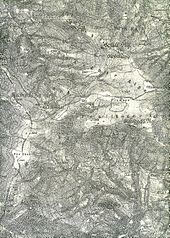 The Franzisco-Josephinische Landesaufnahme was created in the years 1869 to 1887, after the land tax cadastre had been completed. Their sheets were continued (at least for areas of the Republic of Austria) until the 1960s. The entire dual monarchy was included.

The specifications for the land survey were based on the experiences with its unfinished predecessor, the Franziszeische land survey: The survey no longer had to be separated according to crown lands , but rather coherently, a larger scale than 1: 144,000 and contour lines had to be used. Claims of the civil sector had to be taken into account. The corresponding lecture by the Reich Minister of War on October 7, 1869, was approved by Emperor Franz Joseph two days later.

The work on the land survey was carried out by the Military Geographic Institute . Coastal areas have been recorded with the support of the Hydrographic Office in Pola since 1854.

The metric system was used for the first time in the context of this land survey. Furthermore, height information was shown for the first time with a combination of hatches ( called mountain lines ) and elevation lines. The steepness of the terrain was expressed by the ratio of the line thickness of the hatches to the width of the space between the individual hatched lines.

Another basis for the surveying work was a new triangulation as part of the European degree measurement in 1867 .

The sheets of the land survey were created from 1869 to 1887. Transylvania, Hungary, since 1867, and the Austrian Tyrol were the first countries to be recorded in the land survey, whereby in Tyrol the relatively current results of the work on the Franziszeischen cadastre could be taken into account, that in Tyrol and Vorarlberg was completed in 1861. From 1885 to 1888 Bosnia and Herzegovina was recorded as the last area , since 1878 it was administered by Austria-Hungary and only fully integrated into the dual monarchy in 1908. The short time of only 18 years for the creation of the extensive map series was unprecedented, attracted international attention and brought the Military Geographic Institute a number of awards. Several map series of smaller scales (follow-up scales ) were derived from the record sheets, of which only the special map 1: 75,000 could be completed.

The recognition that the mapping of the then still Ottoman territory in south-eastern Europe had received, prompted the Greek government to also request assistance with the surveying of their national territory. As a result, the Austro-Hungarian monarchy formed a geodetic mission that worked in Greece from 1889 and trained local personnel there. The inclusion of Greece was completed in 1896.

The Franzisco-Josephinische Landesaufnahme was replaced by the fourth Landesaufnahme , also precision record , 1896/1987, which forms the basis of today's Austrian map (ÖK).

The sheets were created after the inspection (ambulation) and measurement in the area, they are also called measuring table sheets in parlance . A recording sheet covers 15 arc minutes of longitude and 7½ 'of latitude (approx. 20 × 14 km). Four recording sheets formed a card sheet of the special card 1: 75,000. The record sheets were originally named ..NW, ..NO, ..SW and ..SO according to the cardinal points, from 1917 onwards as sections / 1 to / 4.

Since the work on the maps of the territory of the Republic of Austria on a scale of 1: 25,000 in the 20th century only progressed slowly, these copies were also sold as replacements for maps on this scale until the 1970s.

The recording sheets contain contour lines at a distance of 20 meters. At the beginning of the work, there was no uniform basis for the height measurements. The basis was the mean water of the Adriatic near Trieste and Fiume. A newly introduced precision leveling system was used from 1873, which reduced the error limit from several meters to a few centimeters.

The sheets of the special card were derived from the recording sheets . This map series includes 752 sheets of the Austro-Hungarian monarchy and other sheets with foreign territories. Because of the meridional convergence of the longitudes, the leaves are not rectangular, but somewhat trapezoidal; they each depict an area of ​​30 minutes of latitude and 15 minutes of latitude . The basis for the designation of the longitude is the meridian of Ferro (20 ° west of Paris, 17 ° 40 'from Greenwich). The polyhedron projection was used as an image form for the curved surface of the earth . The terrain was represented by hatching and contour lines per 100 meters, in the flatlands by 50 meters. The sheets appeared from 1872, from 1912 some sheets appeared in multi-colored print, other sheets were published with green print (for forest areas). There are also cards with a grid print for military purposes.

The pages of the special map extended in a north-south direction from Schluckenau in northern Bohemia to the roadstead of Bar (Antivari) in Montenegro (1028.4 km), in an east-west direction from the mouth of the Zbrucz into the Dniester on the border to Russia to Lake Constance (1305.8 km). The drawing area for all 752 sheets was approximately 140 m². In the north-south direction, the strung together leaves extended over 13.7 meters, in the east-west direction over 17.4 meters.

From 1873 to 1889, a total of 333 people were involved in the drawing work; on average, a new sheet of the special map appeared every eight days. 10 mapping departments had been established, of which the basis for the map drawings had been laid in the 16 years from 1869 to 1884 with a complete re-establishment of the monarchy (the occupation area of ​​Bosnia and Herzegovina followed from 1885 to 1887). A mapper had to record around 400 km² in mountainous terrain and 800 km² or more in flatter areas.

The special map was partially updated and reprinted until the 1930s. Since the successor to the Francisco-Josephinian land survey, the planned “4. Landesaufnahme ", progressed very slowly after the First World War and only 25 sheets affected Austrian territory after 1918, the sheets of the special map were used as the basis for the" provisional edition of the Austrian map "on a scale of 1: 50,000 (black with green forest imprint). This provisional edition was published from 1945 until the 1970s.

The results of the land survey were the basis for the representation of the Austrian parts in the general map of Central Europe 1: 200,000. This set of maps is based on a decree of the Vienna Military Geographic Institute of July 1, 1879. It extends from Nice to Istanbul and from Northern Germany to Belarus . The work was not completed, 265 sheets in multi-color printing were available for sale. One sheet contains 8 sheets of the special map 1: 75,000. Sheets north of Turin to Cologne , in northern Greece ( Lamia , Volos , Skiros ) and a number of sheets west of Berlin and Glogau were planned but not completed .

The map series is created in the polyhedron projection. Its sheets were published from 1887. Reprints of sheets of the regional survey, which were created between 1938 and 1944, contain the designation "Hauptvermessungsabteilung XIV Wien" instead of the name of the Federal Office for Metrology and Surveying (Landesaufnahme). This department belonged to the then "Reichsamt für Landesaufnahme" in Berlin.

The sheets each depict one degree (60 ') of geographical latitude and longitude (on average 111 × 74 km) and are cut in such a way that the integer longitude ( meridian ) and the latitude run through the center of the respective map sheet. The leaf designation is based on their numbers: The leaf 31 ° 53 ° thus contains the area of ​​30 arc minutes west and east of the 31st degree east longitude of Ferro and north and south of the 53rd degree north latitude. It represents the north of Berlin . The leaf 30 ° 42 ° represents Rome , the leaf 47 ° 41 ° Istanbul . The northeasternmost sheet is sheet 48 ° 53 ° in the Dnepr region near Rogaczew and Zlobin. The westernmost leaves are the leaf 25 ° 44 ° Nice and the leaf 26 ° 50 ° Mainz .

The sheets of the special map and the general map of Central Europe achieved large print runs. The copper printing presses originally used were replaced by the first high-speed lithographic presses from 1875 to meet the demand for map sheets.

The general map was reprinted until after the Second World War. Until the opening of the Iron Curtain in 1989, the sheets of the general map were one of the few comprehensive information options for areas in Eastern and Southeastern Europe. The sheets of the territory of the Republic of Austria were updated until the 1960s. Available originals or copies or scans of out of print sheets are available from the Federal Office for Metrology and Surveying in Vienna. An abbreviated notation for sheet designations is GKM lx / by, thus e.g. B. GKM 41/43 for the Sofia sheet.

This overview map is one of those maps that was created at the same time as the Francisco-Josephine Land Survey , taking into account its experiences and the results of the work of the Military Geographical Institute outside the borders of the monarchy.

Through the photographic enlargement of a map that had been developed in the Military Geographic Institute under Joseph Ritter von Scheda and which had a scale of 1: 576,000, to a scale of 1: 300,000, a 207-sheet “Provisional Map of Central Europe".

This map series was created between 1899 and 1932 through a further generalization (simplification) of the records of the state survey. It is held in the Albers cone projection , a map projection that depicts the earth's surface on a cone mantle. One sheet contains 12 sheets of the general map.

The Albers overview map was not completed: Sheets from eastern Austria, northern Italy and south-eastern Europe (northern Greece to Constantinople) were printed out in different ways: with and without shading , contour lines or hatching .

Map sheets are in a number of public archives, for example in the map collection of the Austrian National Library and the Federal Office for Metrology and Surveying . The cartographic documents of the land survey for areas outside the national territory of the Republic of Austria were handed over to the successor states of the monarchy in the years after 1918. For the Czech Republic , these documents are available on the Internet.